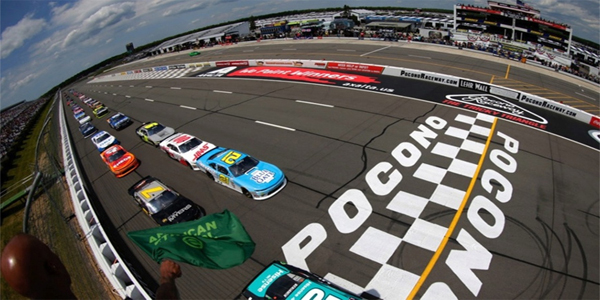 It only took Kyle Larson four points races in his return to secure his first win. He now has four of them and is riding a nice streak with four wins in a row, if we include the NASCAR All-Star Race.

I guess that means we might as well just bet him this week, right? Well, it may be a little more complicated than that as we take a look at a doubleheader this weekend at Pocono Raceway.

We see Kyle Larson priced as the favorite this week and there is really no reason to make anybody else the favorite with how well he is running. With last week’s win and six stage wins over the last three races, he has closed Denny Hamlin’s points lead to just 10. He also has 32 bonus points, which, at this point, basically guarantees him entry into at least the Round of 12, if not the Round of 8.

Hamlin has been going in the wrong direction lately, finishing outside the top five in five straight races, but he’s been really good at Pocono in his career, so he’s still getting some respect in the odds. Martin Truex Jr. has one top-five finish in his last five races, but with three wins on the season, he has a short price as well.

One name that keeps moving up the odds board is William Byron, who was third last week in Nashville and has finished in the top 10 in all but one of the oval track races this year.

Hamlin still has that small points lead, which could very well be gone this week if he doesn’t right the ship. Larson is second, followed by Byron in third and then Chase Elliott in fourth. Elliott was disqualified last week for loose lug nuts, so he finished 39th. Joey Logano is fifth in points.

The rest of the top 10 reads Kyle Busch, Truex, Kevin Harvick, Ryan Blaney, and Brad Keselowski, though there have not been many top-five finishes across that group of late. Austin Dillon, Alex Bowman, Tyler Reddick, Christopher Bell, Chris Buescher, and Michael McDowell round out the top 16.

Kurt Busch is 17th and on the outside looking in at the playoffs. These two races at Pocono are likely his best chances at a win to guarantee a spot.

Pocono Raceway is known as the Tricky Triangle. It is the most unconventional layout on the NASCAR circuit. It isn’t a road course, but the turns narrow like those on a road course. It also has elements of an intermediate oval track. It is a huge asphalt track that measures 2.5 miles in length. There are very long straightaways and some hard-braking turns.

Not everybody likes this track. Turn 1 is 14 degrees and banked like the Trenton Speedway in New Jersey. Turn 2 is like the “Tunnel Turn” at Indianapolis Motor Speedway and banked at eight degrees. Turn 3 is the six-degree turn reminiscent of the Milwaukee Mile. Shifting and braking are really important here and we do see some crashes and some major mechanical malfunctions.

(all stats prior to Saturday race)

Denny Hamlin has six career wins at Pocono and his average finish over 30 races is 11.3. Among drivers with at least 10 starts, Keselowski is the only one better in 11th place. Hamlin’s six wins are twice as many anybody else, as Kurt Busch and Kyle Busch have three apiece. Truex has two. Keselowski, Blaney, Buescher, Logano, Harvick, and Ryan Newman all have one victory.

Harvick and Kurt have the most starts here among active drivers with 40 and 39, respectively. Not surprisingly, they have the most top-five finishes with 14, but Hamlin has 13 in his 30 starts. Keselowski is the only driver with at least 10 and he has that number in just 22 starts.

A Young Gun to Win?

William Byron has six career starts at Pocono and has one top-five finish and four top-10 finishes. That isn’t as strong as Erik Jones, who has eight starts here with five top-five finishes and six top-10 outcomes. Jones is not with Joe Gibbs Racing anymore, though, and it has been a really tough season for him.

Aric Almirola led the most laps and finished third in the first Pocono race last year, so he may be somebody to keep an eye on this week as well.

The Last 10 Starts at Pocono

If we whittle this down to the last 10 races, Byron and Jones have obviously done well, since all of their starts have come in that time period. Harvick has a win and seven top-five finishes with nine in the top 10. He’s finished on the lead lap nine times and has been in the top 10 in all nine.

Keselowski has six top-five finishes and eight in the top 10. Kyle Busch has won three times, with two wins for Harvick. There are a lot of guys that have had some measure of success here, including guys that are not running overly well this season.

Harvick’s 420 points are 49 more than Keselowski’s 371 in that span. Busch, Hamlin, and Truex round out the top five, so basically the guys that have mostly dominated NASCAR within the last five years. Might we see a shocker with those guys all struggling to some degree?

Remember, we’ve got two races this weekend. Watch Saturday’s race to see how everything plays out and see if you can find some betting angles for Sunday.

Don’t be afraid to take some longer shots in either race. Aric Almirola has a fast car right now and ran really well at Pocono last year. Kurt Busch is very accomplished here.

You have to look for Brad Keselowski in one of the two races this week.

Chevrolet is running extremely well lately, so maybe that means William Byron or Chase Elliott can get one. There are a lot of options.

For me, I’ll be on Keselowski, Almirola, and then looking for Kyle Busch to right the ship.