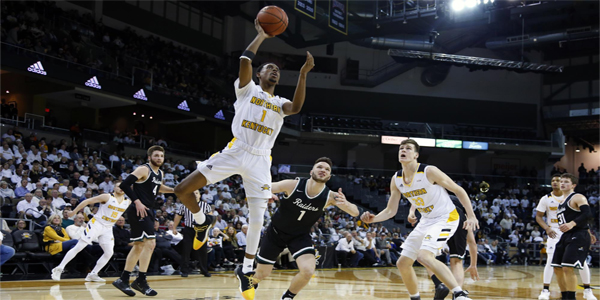 Pickings are a little slim on Friday night in the college basketball world. Once again, we’ve got a Big Ten clash and a whole bunch of MAAC action, but let’s put our focus on the Horizon League. The two best teams in the conference are in action in Dayton, where the Wright State Raiders will host the Northern Kentucky Norse.

Overnight sharp money hit the board on Wright State to bump this line from -3 all the way up to -4 with juice at Bovada. Even Pinnacle opted to push up to -4.5. We say this similar setup early in the morning with Belmont and Murray State yesterday. The Racers did end up covering the number in a 10-point win, so hopefully you were with us on that one.

As mentioned in this week’s college basketball situational spots article, these big battles between low-major conference top teams can create some good opportunities for fades in the games immediately following the marquee matchup. Unfortunately, NKU and Wright State are both idle until next Friday and both have road games in Wisconsin, so it doesn’t work out this time, but keep an eye on it in other leagues.

Bart Torvik has Wright State as his 115th team in the country and Northern Kentucky 139th. The next team in the Horizon is Green Bay at 246. For Ken Pomeroy, the Norse rank higher at 106 and the Raiders are 123rd. UIC is next up at 224. The Horizon League is not particularly good this season and one of these teams looks likely to garner the auto bid for the NCAA Tournament and these games are important for seeding purposes.

Bettors are undeterred based on the early action, but it sure seems worrisome that Wright State has played the 348th-ranked strength of schedule per KenPom. Torvik has them down for 347th. Of course, Northern Kentucky has played the 295th schedule per KP and 294th per Torvik. So, we have a step up in class for both teams. Again, this is very similar to what we saw last night in the OVC with Belmont and Austin Peay. Murray State rose to the challenge.

We’re going to have quite a pace war at the Nutter Center in this one. The Raiders rank 42nd in adjusted tempo per KenPom and the Norse are 308th. This is a really big departure from what we previously saw under John Brannen for NKU. Darrin Horn, who has not been a head coach at the collegiate level since 2012 at South Carolina, took over for Brannen when he made the short move up the road to the University of Cincinnati. Ironically, Horn and the Gamecocks ran at a very quick pace from 2009-11, but dropped back to 315th in adjusted tempo for his final season…the season that got him fired.

The Norse were never fast, per se, but they ranked 141st in tempo in 2019 when they won the Horizon League and went to the NCAA Tournament as a 14 seed. This season, the Norse rank 304th in tempo. They remain efficient on offense and have played well enough on defense, but it does seem like there have been some adjustments for the team with the slower pace.

Through eight Horizon League games, NKU is second in adjusted offensive efficiency and second in adjusted defensive efficiency. They are second in eFG% on offense and first on defense, as opponents are only shooting 26.8% from 3 and 46% from 2. Some adjustments seem to have been made over the last four games, as the Norse has figured things out on offense and have been more consistent on defense. This is a step up in class from the last four opponents, though.

There are a lot of things to like about Wright State. The Raiders take tremendous care of the basketball. They defend the three-point line well. They attack the offensive glass. It would be nice to see more than a 65.7% free throw percentage, particularly because the Raiders will be laying a lot of short and medium numbers in conference play, but fourth-year head coach Scott Nagy is doing well.

There has been one big change for the Raiders and that is their tempo. Last season, Wright State was 294th per Torvik in adjusted tempo. They are 42nd this season. The sudden change of heart has helped Wright State on offense and the team has actually been better on defense this season as well, though we’ll see how they do with a better opponent. After all, Northern Kentucky is up there with Toledo and Kent State as the best teams that the Raiders have faced this season.

The Raiders have four losses by a combined 14 points. They lost in overtime to Indiana State by seven to mark their biggest loss of the campaign.

Perhaps this is a bad take and we need more than 20 games to see it, but it doesn’t seem like Horn is a good fit for NKU. He’s slowed the team to a crawl. Despite shooting 54.1% on two-point shots, which ranks 29th in the nation, the Norse are shooting a three 47.1% of the time. That ranks 19th. They are making one-third of their three-point attempts. Opponents are only shooting 30.5% from 3 against Wright State.

To me, this seems like a spot where Wright State has more stability for a big game. They’ve played a painfully weak schedule, but they will beat Northern Kentucky badly on the glass in this game. The Norse are 313th in the country in opponents’ ORB%. Wright State’s ORB% ranks in the top 35. The Raiders also take better care of the basketball and should be able to speed the game up and make NKU uncomfortable. Of course, it could mean falling back into old habits for the Norse, but they don’t play that way anymore.