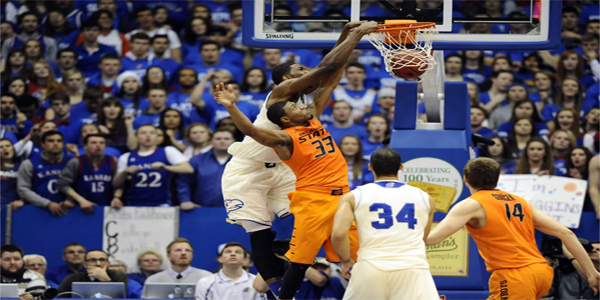 It isn’t the most exciting of college basketball slates for Monday night, but there are a few games that we should all have on our radars. The MEAC actually draws an ESPN time slot this evening with Florida A&M and Norfolk State, one of many games I talked about in this week’s situational betting article for college basketball.

Our focus, though, will be on the late one in the Big 12, where Kansas hits the road for Stillwater to take on Oklahoma State. To this point, we’ve seen a move down from the opener of -8.5 at BetOnline down to 7.5, as the Jayhawks remain a road favorite, but not by as much as they were on the overnight lines. The total sits at 133.5.

Rock Road Chalk Jayhawk brings a 4-1 straight up record in true road games to the table. The lone loss is a one-point defeat at the hands of Villanova at Finneran Pavilion back on December 21. Otherwise, Kansas has won four in a row on the road, all by at least nine points. Overall, the Jayhawks are 6-2 in games away from Phog Allen Fieldhouse, with the other loss coming by just two points in a neutral setting against Duke in the season opener for both squads.

It has not been a good season for Oklahoma State. The Cowboys are 10-9 with a strength of schedule that ranks 15th per Ken Pomeroy and 11th per Bart Torvik. That number will go up with tonight’s game against Kansas, a team that Torvik has rated first in the nation and KenPom also has listed first and by a decent margin at that over Duke.

The trend line really doesn’t look good for Mike Boynton, even though he brought in two of his best recruits in this 2020 class. The third-year head coach oversaw a 12-20 team that went 5-13 in conference play last season. At this point, even though there are 12 conference games left, matching that five-win total looks like a real challenge. The Cowboys just snapped a six-game losing streak with a win on the road in College Station over Texas A&M in the SEC/Big 12 Challenge.

Kansas has three losses on the season and Oklahoma State doesn’t fall in the same category as Duke, Villanova, and Baylor. But, as we know, that’s what the spread is for. We don’t need Oklahoma State to win if we take them. We just need them to lose by less than the number. It will take a really big defensive effort from the Cowboys for that to happen. Kansas’s three losses have seen them score .824, .882, and .887 points per possession. They scored .918 PPP against West Virginia in a seven-point win at home earlier this season.

Otherwise, Kansas has won by margin in most of its games and has performed very well offensively. The Jayhawks did have a defensive lapse last time out against Tennessee, allowing 1.028 PPP. That was the third-highest mark of the season in the 74-68 win. That wasn’t the best of spots coming off of the brawl in the Sunflower Showdown. Kansas returns to Big 12 play now, so it is time to get focused again.

If any team can shut down Udoka Azebuike, that team will have success against Kansas. The Jayhawks rank 11th in the nation in 2P%, but most of that is Azebuike, who is shooting 77.5%(!!) on his two-point tries. He is 100-for-129. Devon Dotson, Marcus Garrett, Ochai Agbaji, David McCormack, and Isaiah Moss are all shooting 50% or better on two-point shots. The problem for Kansas is that nobody is really knocking down threes. Agbaji is shooting 36% on his 83 attempts and true freshman Christian Bruan is at nearly 44%, but he has only taken 39 threes and 10 of those came in his 20-point effort against Kansas State.

Oklahoma State defends the 3 very well at 30.2%, but sits 102nd in the nation on two-pointers at 47%. If we focus exclusively on the six Big 12 games, however, Oklahoma State’s 2P% on defense falls to 52.5%. The Cowboys may be slightly better than Kansas State in the eyes of some, but those are far and away the two worst teams in this conference.

That being said, Oklahoma State has had a couple of really nice defensive efforts in conference play. They held West Virginia to .815 PPP and TCU to .843 PPP. Of course, they also lost both of those games by double digits. The offense has been better the last two games, but the defense has faltered. If it’s not one thing, it is another for Oklahoma State this season.

Boynton’s team just doesn’t have that one reliable player. The freshmen don’t play much and sophomores Isaac Likekele and Yor Anei have been wildly inconsistent. The seniors have also had their problems. It will likely take a monumental effort from Thomas Dziagwa, who is shooting 42% from 3, to pull any upsets in Big 12 play this season.

We’ve established that Kansas will win the game. Now the question is whether or not they will win the game by the required margin. After all, this line did move down from the -8.5 or -9 opener. The Jayhawks are not a good free throw shooting team at 66.1% and that may be required to get out in front of this number and cover it.

Still, as this line drops down to 7.5, Kansas has to be the side. They are just the better team and the much more efficient team on both ends of the floor. The game against Texas Tech isn’t until Saturday, so this isn’t any sort of look-ahead spot. It will be Kansas for me.