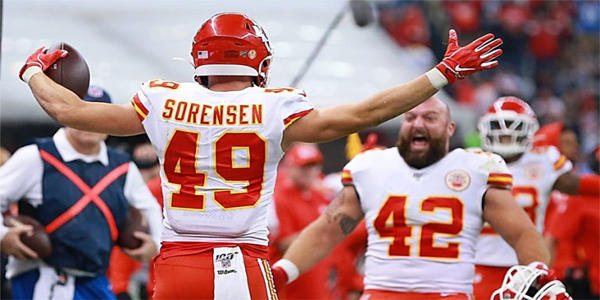 To me, there are four categories of props for the Super Bowl. There are the Game Props, Player Props, Team Props, and the Entertainment Props. We’re covering all of those for you here at BangTheBook.com in advance of the big game. Every writer covering the Super Bowl for us has put his own unique spin on the prop market and I’m going to do the same here with my team and player props for the Kansas City Chiefs.

In order to make it easy and a little bit less cluttered, I’ll be doing individual prop betting articles for the Chiefs and then one for the 49ers to cover the team and player angles. When you think about it, with the huge contrast between the two teams, it only makes sense to separate them, considering they have both had success in very different ways this season.

As always, you want to do everything you can to shop around for the best prices on the prop betting market. The lines and the juice will be different from book to book and it is very much in your best interest to get the best line and/or get the lowest juice. Every few cents of juice and every yard can make a world of difference against your bottom line. The nice thing is that all sportsbooks have props up for these games, so you have the ability to look around and get the best bang for your buck.

Here are my team and player prop betting picks and suggestion for the Kansas City Chiefs:

First Touchdown Scorer Patrick Mahomes (+1850, 5Dimes Sportsbook) – This looks worthy of a low-risk dart throw in my estimation. The Chiefs have had some issues in the red zone this season, as they ranked 20th in red zone TD% at 54%. Mahomes has been running a little bit more in the playoffs with 15 carries for 106 yards and a rushing score. The Texans didn’t have much of a pass rush and the Titans certainly aren’t on the level of the 49ers.

San Francisco can get pressure with just the front four. Perhaps they will put a spy on Mahomes, but with double coverage likely coming on Travis Kelce and Tyreek Hill, that doesn’t leave many free defenders to roam around. Mahomes has no problem making plays with his legs and actually has 22 carries over the last three games, including the season finale against the Chargers.

With this price at +1850, and the price at +1600 at BetDSI, this isn’t a bad gamble on a dynamic player that will touch the ball on every snap. Mahomes may need to get creative in the red zone where things get bottled up a little bit and he’s been more willing to run as the games have increased in importance.

It is also worth considering that it looks like sharp money is on under completions and over rushing yards for Mahomes early in the prop betting process based on the juice on those numbers. He is +1200 to score the first Chiefs TD.

Under 4.5 Players to Have a Rushing Attempt (-115, 5Dimes) – When we look at the composition of the Chiefs roster, we have to figure out who will get the football. We know that Patrick Mahomes will have at least one rushing attempt. We know that Damien Williams will have several. The others with carries in the postseason are Tyreek Hill, Sammy Watkins, and Darwin Thompson. Hill has two carries. Watkins and Thompson have one.

Unless the Chiefs try some sort of crazy shenanigans with Mecole Hardman or Damien Williams gets hurt, it seems highly unlikely that five players get a carry. The Super Bowl probably isn’t the time to experiment with a bunch of jet sweeps and other gadget plays.

Thompson didn’t even have a carry in the Divisional Round against the Texans. Hill’s two carries have gone for 11 yards, so it’s fair to wonder if that is even that great of an idea. In the game against Houston, Thompson was out there for one snap. He got 11 snaps against the Titans. Perhaps fullback Anthony Sherman messes this up, but I doubt it.

Damien Williams Over 81.5 Rushing/Receiving Yards (+100, 5Dimes) – So far, I don’t see anybody else with this prop, but it will come up at other books throughout the week. Williams had 45 rushing and 44 receiving in the AFC Championship Game after having 47 rushing yards and 21 receiving yards in the Divisional Round. He did only haul in two of his six targets in that game against the Texans.

I do think Williams plays a huge role here. The 49ers won’t be sending a lot of linebackers or defensive backs in all likelihood. They get good pressure with the front four and Mahomes is a mobile quarterback. I have to think Williams gets a lot of touches here. He had 14 against the Texans and 22 against the Titans. My guess is that the goal is 20 touches for him.

Williams doesn’t break a lot of long runs or big plays, but a collapsed pocket is going to force Mahomes to find a safety valve and Williams looks like a good option. It took until about midseason for him to become the focal point of the offense, but he’s had 14, 24, 5, 19, 16, 14, and 22 touches since Week 9.

Right now, his rush attempts line sits at 13.5 and his receptions are at 4.5, though the under is pretty heavily juiced. If he gets 17 or 18 touches, can he get five yards per touch? That seems pretty manageable.

For more on Damien Williams, here are Charles Jay’s thoughts.

Daniel Sorensen Tackles + Assists Over 5.5 (-130, 5Dimes) – In our quest to get these prop betting articles out as early as possible, I regret to inform you that 5Dimes is the only book offering defensive player props in the offshore market.

But this opportunity is too much not to mention and odds will come up at other books throughout the week. Daniel Sorensen has taken over the defensive reps for Juan Thornhill, who tore his ACL prior to the playoffs. Sorensen has eight tackles + assists in each of the two playoff games to this point. He’s played all 146 defensive snaps through the two games.

Sorensen could draw George Kittle. Even if he doesn’t, he’ll have to step up and help out in the run game.

The thing about Sorensen, and why we find some hidden value, is that he also plays a lot on special teams with kick and punt coverage. It seems very likely that Sorensen is active enough to get well over 5.5 here and this is my favorite defensive player prop of them all that I have seen so far.

Do yourself a favor and take a look around BangTheBook.com to find all of our prop betting coverage. We have a lot of it and it will certainly help you with the big game.