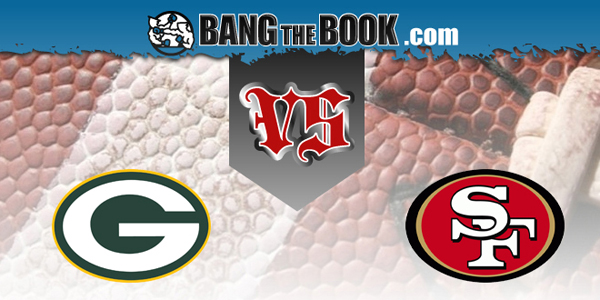 Even though it appears first by rotation order, the NFC Championship Game is the nightcap of what will be a Super Bowl-deciding Sunday on January 19 when the Green Bay Packers take on the San Francisco 49ers. The top two teams in the NFC advanced to the Conference Championship Game and will now play for the right to head down to Miami Gardens for Super Bowl LIV at Hard Rock Stadium in the Sunshine State.

It sure looks like San Francisco will be the representative from the NFC, as the Niners are a touchdown favorite at Levi’s Stadium over the Packers. Of course, we’ve already seen some big upsets in the playoffs so far, most notably the Vikings over the Saints and the Titans over the Ravens, so we can’t take anything for granted in these playoffs.

The side opened 7 and hasn’t moved much from that point. The total is hovering around 45, with some places making the early move down to 44.5 in what could be a lower-scoring NFC Title Game.

The 49ers defense was a big story coming out of the Divisional Round. As I said until I was blue in the face and listeners were tired of hearing it, the 49ers had an early bye week and it showed with the defensive drop-off over the later portion of the season. San Francisco’s defense was suffocating early in the year, as opponents turned the ball over 20 times in the team’s first nine games and managed just 129 points.

Something changed with that overtime loss to the Seahawks, though. Outside of a dominating win over these same Green Bay Packers, the 49ers atllowed at least 20 points in each of their last seven regular season games and even allowed over 30 points twice. The ball-hawking defense wound up with only one game in the last seven with multiple takeaways.

In the Divisional Round game against the Vikings, however, the defense looked inspired, rested, and ready to go. The Vikings managed just 147 total yards and only seven first downs. It wasn’t an offensive showcase for Jimmy G & Co., but it didn’t need to be. The defense carried the weight for the first time in several weeks. That has to have San Francisco’s confidence sky high going into the Conference Championship Round.

The 49ers side of the handicap is pretty cut and dry, if we are being honest. The defense is better than it was late in the season, though maybe not as good as it was last week. The offense is fine and it wasn’t a surprise to see some offensive regression given a higher-caliber opponent.

But the Packers, man. The Packers. I have no idea what to say about this team. Their marginal 5.4 yards per play during the regular season led to one of the less-heralded seasons of Aaron Rodgers’s career. They were outgained on a yards per play standpoint, yet went 13-3. They typically started fast and did that in the game against the Seahawks with 21 first-half points to be able to sit on a 21-3 lead. And sit on it they did, as the Seahawks outscored the Packers 20-7 in the second half and may have had a chance if Pete Carroll coached more aggressively.

Are bettors going to get too caught up in the final score? In the final box score? Do we hold it against a team for squatting on a big lead after clearly being the better team in the first half?

Something else worthy of discussion regarding this game and this line is that the 49ers opened 6.5 against Minnesota. The line was promptly bet to -7, where it stayed throughout the week. This week, the 49ers opened -7. The Packers beat the Vikings twice during the regular season en route to 13-3 and a division title. Is it fair to say that Minnesota, even given the spot last week, is a better team than Green Bay? That’s what the opening line would indicate. If that’s the case, is this line too low? Or, if you fall on the GB > MIN side, is this line too high?

We know that playoff betting markets are shaped by narrative and recency bias. Everybody watches these games and everybody has an opinion on these games. If we really hone in on the handicap, is it fair to say that Green Bay is on the same wavelength as Minnesota? And if that’s the case, does a Green Bay team with a less explosive offense and a worse defense per the full body of work deserve to be lined the same?

Expect one huge difference in this game for the Packers – pressure. The Seahawks don’t generate a ton of pressure. In fact, they were bottom five in Pressure% per Pro-Football-Reference. The 49ers? Well, they were second. San Francisco’s defense also led the NFL in Hurry%. Does that make Rodgers a better bet in this game? We know his improve skills and ability to throw on the run have served him well throughout his career. Is he still that same guy?

You know what else we know? The 49ers allowed the fewest air yards in the NFL…by almost 400. The Patriots allowed 396 more air yards than the 49ers and they were the second-best. Rodgers regressed in the Completed Air Yards per Completion (CAY/cmp) as provided to Pro-Football-Reference by Sportradar. Rodgers went from 6.2 to 5.6 from 2018 to 2019.

For San Francisco backers, the worry has to be scoring enough to get margin. A similar defensive performance would increase the margin for error for Kyle Shanahan’s offense, but we shouldn’t bet on that. The Packers weren’t very good against the run, allowing 4.7 yards per carry. Green Bay was actually top 10 in adjusted net yards per pass attempt. That means running the rock, but that also means that the 49ers can play to their strength. The Niners had 186 rushing yards to 122 passing yards against the Vikings and both Tevin Coleman and Raheem Mostert had 4.8 yards per carry, even though San Francisco’s longest rush of the game was 11 yards.

Their run game is just schemed and designed so well that they are always able to move it forward in big enough chunks to stay on schedule. That’s why the 49ers ran 68 plays to Minnesota’s 45. That’s why the pick is the 49ers.

The Packers are going to have to be extremely efficient with their possessions as long as San Francisco takes care of the football and that seems like a challenge against the 49ers and a revitalized defense. Green Bay won’t turn the football over, but Rodgers is likely to be harassed all game long and he doesn’t have enough guys capable of providing separation.

Realistically, the under 45 could be the best play of the game with the expectation that San Francisco grinds this game to a halt, much like they did last week.

Results Are All That Really Matter

Wednesday Wagering with Wes Reynolds – Packers vs. 49ers, Titans vs....