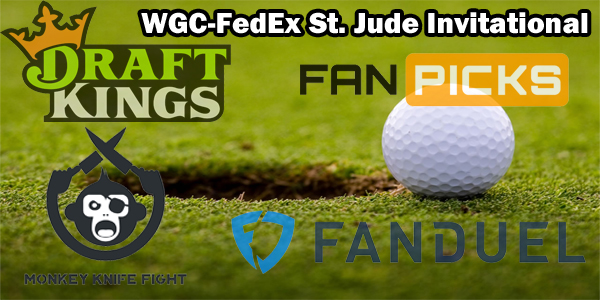 Some great players will be listed at some great salaries this week across the DFS landscape. The exclusivity of an Invitational event really limits the field and that is the case this week. Forty-five of the top 50 in the Official World Golf Ranking are on hand and those players make up more than half of the field for the WGC-FedEx St. Jude Invitational.

We’ve got a lot of years of course data to look at for this event, but many of the top players in the field just returned to TPC Southwind last year because the event, which used to fall between much larger events, is now a large event of its own with a prize pool in excess of $10 million. When this was the FedEx St. Jude Classic, a lot of players skipped it. Now that it is what used to be the WGC-Bridgestone Invitationl, the bigger names are interested.

Salaries come from DraftKings as we try to isolate some good value picks in the field.

Matthew Wolff ($7,900) – This is typically higher than I like to go with the picks in the article, but Matthew Wolff is actually one of my outright picks from our full preview, so it would be silly not to includr him here. Wolff has three top-25 finishes in his last four events, including a runner-up finish a few weeks back in the Travelers Championship. Putting and play off the tee, specifically driving distance, are really helpful at this par 70 course coming in at well over 7,200 yards. Wolff putted well and struck the irons well last week at TPC Twin Cities and was sixth in SG: OTT in The Memorial Tournament. He’s a force to be reckoned with this week, despite the star-studded field.

Kevin Kisner ($7,000) – The prices start dropping pretty fast in a field like this. If putting is a big part of the equation again this year, and it should be with these massive green complexes, then Kevin Kisner should be right in the thick of things. Kisner was 27th last year in his first start at TPC Southwind in five years. Kisner is regularly among the better putters on the PGA Tour and even though he’s missed three of five cuts since the return, he was third in the Workday Charity Open, so he’s been able to put it together at least once in recent events. Kisner actually did not putt well in this event last year, but still made the cut and took home a nice pay day.

Ryan Palmer ($6,700) – According to DataGolf.com, the course profile fits that of Colonial Country Club. Driving distance is more important here than it is at Colonial, which could be what makes this difficult for Ryan Palmer, but he’s a member at Colonial and that could translate into some success here. Palmer was second two weeks ago in the Memorial, so he’s in pretty decent form. He was also eighth in the RBC Heritage. Palmer did not qualify for this event last year, but had made seven straight starts at this course, including a couple of top-five finishes. He’s a very low price, but not a bad gamble this week.

JT Poston ($6,500) – Can JT Poston snap out of it this week? Poston has missed three straight cuts since finishing eighth at the RBC Heritage and 10th at the Charles Schwab Challenge. Maybe a week off to clear his head will help. Poston is one of the stronger putters in this field, which could give him a leg up. Poston putted really well back in 2018 when he finished T-18 and ranked just slightly outside the top 20 in SG: Putting for that event. He clearly made some adjustments from his MC in 2017. With a week off to work on some things and a course where the flatstick comes in real handy, Poston is a decent grab at a deeply-discounted price.

Mackenzie Hughes ($6,400) – Your leader in SG: Putting at The Memorial Tournament was Mackenzie Hughes. Hughes also played exceptionally well in all facets at the Travelers Championship when he finished T-3rd. We’re talking about a couple of really good events for Hughes recently and the putter has been a big part of the equation. Putting will be at the forefront this week at the WGC-FedEx St. Jude Invitational and a big putting effort from the Canadian will put him in the thick of things. Hughes has only started here once and missed the cut, so that is a concern, but he’s in some pretty great form right about now. Again, we’re just looking for upside in the event that you are running out of money after taking some of the top players and the flatstick is good enough to give Hughes a chance at a high finish.