You’d have to go a long way to find a sportsbook / casino entertainment complex that promotes as aggressively as the guys at BetOnline.

For those who feel they can “beat the number,” they are offering their $250,000 NFL Mega Contest, which will run through the entirety of the regular season. And yes, the quarter of a million dollars is guaranteed.

You still have time to get involved; if you have your entry done by 7 PM ET on Monday (September 14), you’re in.

There are only two requirements to be eligible – one is that you have a BetOnline account, and the other is that you pay the entry fee of $100. And you don’t have to restrict yourself to a single entry either. Indeed, you can join up with five. And the fees can all be taken out of your sportsbook balance.

Your second and third entries are $100 apiece. And then, the fourth and fifth are $50 each. Obviously that increases the chances for you to end up with one of the cash prizes at the end.

And for each quarter as well. That’s right. BetOnline will, as an additional incentive, divide the season into four segments:

(NOTE: With the bye week, the NFL regular season is 17 weeks)

In each of the four quarters, the contestant with the most “points” will get a $4,000 prize.

And just how are those “points” accumulated?

Everybody who has entered the Mega Contest will make a selection on five different NFL games every week, as it relates to the spread (ATS). Of course, the lines that are being used are coming from BetOnline.

When a contestant makes his or her selection, the number they are making the selection at saves right then and there. In other words, this is not like the racetrack where you can make a wager at a certain price but are only paid on the closing price. Naturally, this presents a potential edge for conscientious football bettors who are able to recognize value before the line moves.

So those who participate should be watching, starting Tuesday afternoon, for the lines that are specific to the contest.

And so the contest proceeds on that basis.

Keep in mind that on any single entry, participants are not allowed to play the same side twice. What this basically means is that if you have picked a team, then saw a subsequent line movement in your favor, you can’t hit it again with the same entry. By the same token, you can’t pick one side and then turn around and pick the other side.

As we mentioned, the $250,000 is guaranteed. So here’s how it will play out for the top finishers:

In all, one hundred contestants will be paid a prize.

So this is just another way that BetOnline is everyone’s headquarters for ways to win BIG this football season……… Also, don’t forget some other things – Odds Booster affords you greatly enhanced payouts on pre-selected parlays EVERY DAY. And the $2.5 Million Championship Online Poker Series in underway, with a hundred different events……… You can open up an account with BetOnline in any number of different ways. This includes cryptocurrencies like Bitcoin, which allows you deposit and withdraw with lightning speed, without any transaction fees. 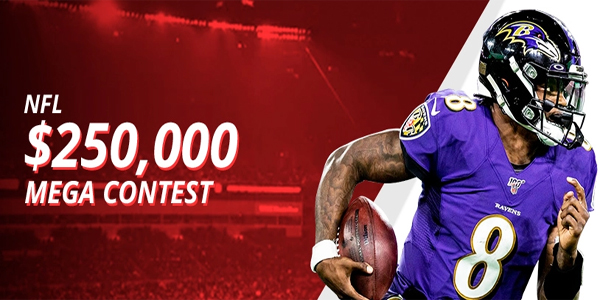 Going through an entire NFL season without ever winning a game is something that gives coaches nightmares (or at least it should). With it...
Read more
NFL Picks & Betting Articles

With the conclusion of the Monday Night Football game between the New Orleans Saints and Las Vegas Raiders, Week Two of the NFL season...
Read more
NFL Picks & Betting Articles

The Las Vegas Raiders were hoping to have more of a gala celebration for the opening of the brand-new Allegiant Stadium. But alas, they're...
Read more
NFL Picks & Betting Articles

Throughout the offseason and heading into Week One, the AFC South was considered a two-team race. With the addition of Philip Rivers, the Indianapolis...
Read more
NFL Picks & Betting Articles

Well, Aaron Rodgers may not have done as much damage in Minneapolis as some of the rioters, but his presence was felt just the...
Read more