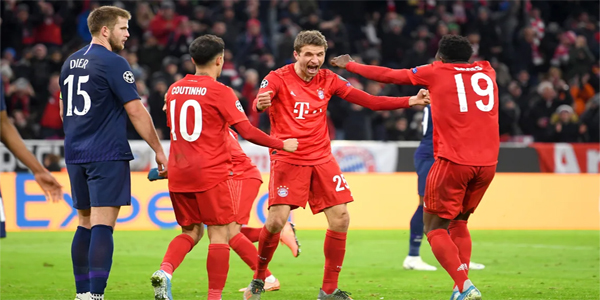 The Bundesliga is back.

After a delay imposed by the government, Germany’s top-tier soccer league will be back in action on Saturday as there is a concerted effort to finish the season by June 30.

BetAnySports customers who have followed international “football” in the least will be familiar with the two glamour outfits in the circuit. And they are, at the moment, the top two contenders for the championship.

Bayern Munich (Bayern Munchen, as you’ll see it in the sportsbook) is the league leader, with 55 points based on 17 victories, four defeats and four draws. They lead Borussia Dortmund by four points in the standings, with nine games to go. RB Leipzig is a point behind Dortmund and Borussia Monchengladbach is a point behind Leipzig.

And Dortmund has a big one this weekend, as they square off with sixth-place Schalke, in another installment of what is one of the storied rivalries in the German game.

Bundesliga is the first major European soccer league to return to regular play, which means that the other leagues are going to be watching them very closely. They have initiated a number of hygiene protocols, in addition to restricting gathering at the various league venues to only 300 people. That includes all team personnel, so these stadiums will look cavermous, to say the least.

Could this be a factor in the way these games are played out? It just might. Whether that makes a difference at the top is another question entirely.

In the latest Bundesliga futures odds posted at BetAnySports, Bayern Munich is heavily favored to register what would be their eighth consecutive league championship:

Bayern’s coach, Hansi Flick, likes to think that his team has hit the ground running when it comes to the training period that has been required by the league. Each of the teams has been ordered to a seven-day quarantine training camp, as things move from small groups to full-team exercises.

And the effort is now fortified with the addition of Miroslav Klose to the cause. Klose is the all-time record holder for goals scored in World Cup competition, and was with the 2014 World Cup champion German team, which Flick served as an assistant coach. Now Klose, who has worked with the national Under-17 team for the last two years, comes on board in that role with Bayern, and will work specifically with the strikers. As one of the best, he’s well-equipped.

The first game of the newly-restarted season takes place on Sunday (Noon ET) against Union Berlin, which may be the eleventh-place team but has performed surprisingly well, considering that it’s their first season in the Bundesliga.

In the European soccer odds posted at BetAnySports, Bayern Munich is a considerable favorite in this match that will be televised on Fox Sports-1:

When you have a long layoff like this, you have to wonder how this might affect the teams that had worked up some momentum. And no team in the Bundesliga had come into this unexpected break with the head of steam that Bayern Munich had. They were languishing in seventh place with about a third of the schedule in the books, but they have won ten of their last eleven matches.

Everyone knows that Bayern has the most explosive goal scorer in the league in Robert Lewandowski, a former Bundesliga Player of the Year and World 11 member. But for a team that has gotten off to slow starts on the schedule, this might be a top spot against a Union team that is obviously upset-minded.

With home victories over Dortmund and Monchengladbach, they’re a legitimate challenge for Bayern, which has lost twice in twelve matches on the road (with two draws). So this might be a situation where taking the two goals might make sense.