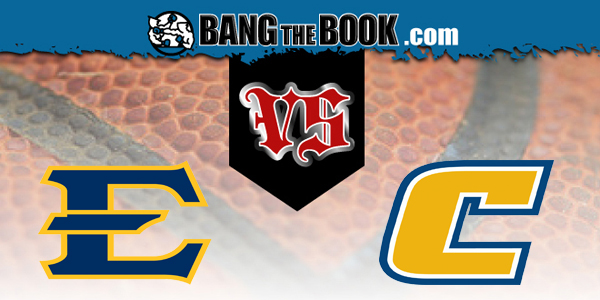 It was a solid week last week for the spotlight picks with a 5-2 record following a winner on the under in Minnesota vs. Maryland on Sunday night. The Golden Gophers once again struggled badly away from home and Maryland stopped scoring in the second half following a 44-point barrage over the first 20 minutes.

Hopefully we can ride ol’ Uncle Mo into this week with a very limited slate on Monday night. A lot of eyes will be on Virginia vs. Florida State, but not ours. Instead we’ll be looking at the game between East Tennessee State and Chattanooga. The Mocs are a short one-point favorite at home per Bovada Sportsbook and the total for the game is 134.

What a thriller the first game between these two teams was. Chattanooga went on the road and beat ETSU 67-65 on AJ Caldwell’s three-pointer at the horn. It was the only three points that Caldwell scored in his 34 minutes of game action, but he stared down the game winner and buried it.

While that was the big story for Chattanooga, the big story for ETSU was that the Buccaneers really squandered a great shooting performance from deep. ETSU was 12-of-23 from three in the game, including Ty Brewer’s triple with 11 seconds left that gave the Bucs the lead. For a team shooting 35.4% from three, the 12 triples made in that game are tied for the second-most this season.

What was not good in that game is that ETSU only went 10-of-26 on two-point shots. That is the lowest number of made two-pointers in a game this season for the Bucs. They are only 183rd in the nation in 2P% at 49.5. That number is 50.7% in conference play, but in the offense-first SoCon, that percentage ranks ninth. It has actually been the three-point shot that has been the great equalizer for the Buccaneers, as they are at 39.9% in that department.

The last game against Wofford was a good one defensively for ETSU. They had allowed at least 1.10 points per possession in four of their last five games, including the Chattanooga loss. The Terriers had a terrible shooting performance going 17-of-50 overall and 8-of-32 from three. Was that more about the ETSU defense or the Wofford offense? My guess is the latter.

ETSU has been one of the top teams in this conference for a long time, but they don’t seem to be quite the same team this year. Jason Shay was elevated from assistant coach to head coach when Steve Forbes went to Wake Forest, but ETSU lost Isaiah Tisdale, Tray Boyd III, Lucas N’Guessan, and Bo Hodges, who transferred to Butler. They’ve felt those losses and continue to do so.

Chattanooga took a pretty big leap last season in the third year under head coach Lamont Paris. The Mocs were 20-13 overall and 10-8 in conference play. Their SoCon Tournament came to an end with a very close loss to Wofford by just two points one day after beating UNC Greensboro. This is a team that has come a long way and is having a fine 2021 season.

The Mocs have largely had success because of one key stat. Their 13.7% TO% is tops in the conference. They are only 7-5 in conference play because they are not a very good defensive team and don’t shoot the ball particularly well. They are at 79.4% from the free throw line in conference play and one of the top teams in the country in that department, but that is where it mostly ends. Chattanooga is 10th in 2P% in conference action at 50.1% and ninth in ORB%, so they aren’t getting back their misses.

Defensively, opponents are shooting over 37% from 3 in conference play, which is a big deal against an ETSU team that leads the conference in that department. The Mocs are eighth in conference play in eFG% defense at 54.2. That being said, they’ve won four in a row and seven of 10 against SoCon foes after starting 0-2 with losses to Furman and VMI.

Chattanooga led big early in the first meeting and never trailed until that Brewer three that put ETSU up with 11 seconds left. Will they have enough fast start at home? The first game was played to 61 possessions, which is definitely a slow pace by the standards of both teams. Will this one speed up a little more?

This should be another close one between two pretty evenly-matched teams, but I’m looking at ETSU to get road revenge. Chattanooga’s TO% in the first game was just 8.2%, which is the second-lowest in a conference game. ETSU had that terrible shooting performance on two-point shots going 10-of-26. That is the lowest number of twos made against the Mocs this season. Maybe the 12-of-23 doesn’t come back from three, but ETSU should be better all around in this second meeting.