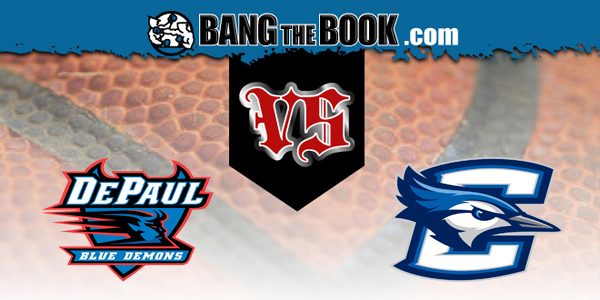 An easy winner with the Campbell Fighting Camels put us off to a 2-0 start with this week’s spotlight games. It is definitely nice to get off on the right foot for a week, especially such an intriguing week at conference tournaments begin on Thursday with the Horizon League and continue into Saturday with the Big South and the America East.

My podcast isn’t at BangTheBook anymore, it is now over at ATS.io, but you can check out Monday’s edition of the show with Kyle Hunter when we talked about conference tournament handicapping.

The regular season is still in full swing, though, and we’ve got lots of games to pick from tonight. The game I’ve chosen to highlight is the matchup between DePaul and Creighton on CBS Sports Network with a 9 p.m. ET tip-off. Creighton is favored by 15 at BetOnline Sportsbook with a total of 141.

The DePaul Blue Demons are still fighting. That much was evident on Saturday when the Demons upset St. John’s on the road by an 88-83 score. It was an out-of-body offensive experience for DePaul, who was 30-of-46 from two-point range. It goes without saying that DePaul’s performance from that game will regress. After all, this is a team shooting 46.4% from two-point range for the season.

Give credit where credit is due, though. DePaul got a lot of high-percentage looks at the basket in this one. They were 25-of-35 at the rim and added a couple of dunks for good measure. DePaul was even able to overcome the fact that St. John’s scored 24 more points from beyond the arc and seven more points at the free throw line. DePaul also had 24 turnovers.

There were a lot of weird outliers from that game to say the least. One thing that was not an outlier was that DePaul played well defensively, despite giving up 83 points. The game was played to 80 possessions. St. John’s was just 12-of-38 from two-point range. DePaul has held four straight opponents to under 15 made two-pointers. Opponents are only shooting 47.9% on twos.

DePaul has also held the opposition to 30.7% on three-pointers this season, a really relevant number tonight when you consider the opponent. Creighton was 17-of-34 from two and 6-of-22 from three in the first meeting, a 69-62 win in Chicago. DePaul ranks second in adjusted defensive efficiency in Big East play, third in eFG% defense, and second in 3P% defense.

We’ll have to see how the Big East Conference does tournament seeding, but Creighton is right there with Villanova after the big 16-point win on February 13. Creighton is 12-4 in league play and Villanova is 10-2. The two teams are scheduled to play again on March 3 in Pennsylvania. Creighton also has a plucky Xavier team coming up in Cincinnati on Saturday.

The Bluejays rank ninth in eFG% on the season. They are sixth in 2P% at 58% and 49th in 3P% at 36.8%. They’re also a pretty strong defensive team, holding opponents to just 44.6% on two-point attempts. Creighton takes a three-pointer 44% of the time in league play, so they have been able to get some margin on teams despite playing at a pretty average pace as far as Big East squads go.

Creighton also has a knack for playing close games. While they have a strong 12-4 record in league action, eight games have been played to a final score of five or fewer points. This is a pretty competitive conference from top to bottom and the number of close games is a good illustration of that, especially when you consider how potent the Creighton offense actually is.

Fifteen points is a huge number. The first game between DePaul and Creighton was played to 67 possessions. DePaul is a solid defensive team. They might not do a ton on the offensive end, but they are very good without the basketball. Creighton is coming off of a 10-day pause and has bigger fish to fry down the line with games against Xavier and Villanova on the horizon.

They’re worried about winning here. They’re not worried about blowing out DePaul. With this line where it is, they’ll need to blow out DePaul and I’m not so sure that they will.