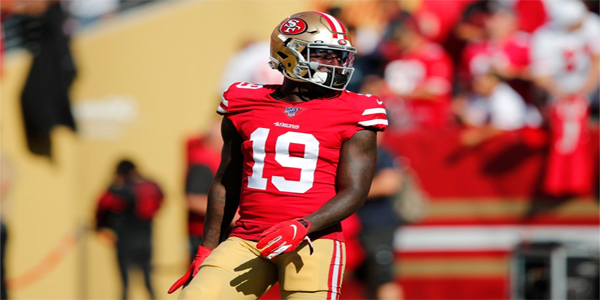 It can be argued that the San Francisco 49ers might not be in the Super Bowl right now if not for the emergence of a young receiver named Deebo Samuel, who did not exactly come out of nowhere but has become an essential part of the game plan.

He has also been a beneficiary of a new mentor, as Emmanuel Sanders has taken him under his wing.

It does not take a lot of imagination or speculation to visualize Samuel as a very prominent figure when Super Bowl 54 takes place on Sunday at Hard Rock Stadium in Miami Gardens.

FOX will televise the game between the Niners and Kansas City Chiefs with a 6:30 PM ET kickoff (and a never-ending pre-game show), and BetAnySports customers will have the opportunity to place wagers during the game itself as they take advantage of what is available through both Sports Betting Ultra and Live Betting Extra.

Samuel attended the University of South Carolina and was drafted in the second round last April – the third wideout overall. He was expected from the beginning to challenge for a starting role. And he has been asked to step up and handle more of the burden with the injuries to Olympic-level sprinter Marquise Goodwin and Jalen Hurd, the big receiver from Baylor who was chosen right after him in the third round.

You can evaluate Samuel from two different perspectives; before Sanders came in the trade, he had averaged just 33 receiving yards per game. After Sanders’ arrival, his average has jumped to 67 per contest. Overall, he’s caught 57 passes for 802 yards (that’s 14.1 yards per reception).

Samuel does not provide the superb speed that, say, Tyreek Hill or Mecole Hardman offer to KC’s Patrick Mahomes. But at 4.48 in the 40-yard dash, he’s not slow by any means. He DID get off to a relatively slow start, but Sanders has enjoyed imparting wisdom to him. “He’s a special player,” asserts Sanders. The momentum he’s built has made him one of the top rookie wide receivers; he’s had three games of 100 or more yards in a San Francisco uniform.

There are other things he can do to contribute. Samuel has registered 159 rushing yards and scored three touchdowns on the ground. So you can count on him being a threat on reverses. He may be 5-11, but he’s strong, and he can take short-distance tosses from Jimmy G and get himself some yards after a catch.

So now what? Well, at this point it’s entirely possible that among the wideouts, he is going to be Garoppolo’s main target in this game. And unless the Niners are simply going to be able to steamroll the Chiefs with their ground game, as they did with the Vikings and Packers, Jimmy G will have to stretch the field a little. The good news along those lines – and something many people might not be aware of – is that when it comes to throwing passes 15 yards or more beyond the line of scrimmage, Garoppolo is 58.5% accurate, which is the best percentage in the National Football League.

We’re going to take an attractive price here with OVER 56.5 on the receiving yardage.

At BetAnySports, you’ll get all the Super Bowl props you could ever hope for. And remember that after the game begins, real-time wagering will be available through Sports Betting Ultra……… You’ll find it quite simple to open up an account – just use your debit or credit card, person-to-person transfers or the virtual currency of Bitcoin, which is fast and easy with their automated system, and NEVER incurs a transaction fee!

Sign up for an account at BetAnySports through Bang The Book, using the bonus code of BTB50, and it will be good for a 50% Welcome Bonus up to a $1,000 Deposit!

How to Bet College Basketball Prediction: Notre Dame vs. UCLA 12/8/18

NFL Betting Odds: Who Is Going To Win Coach Of The...