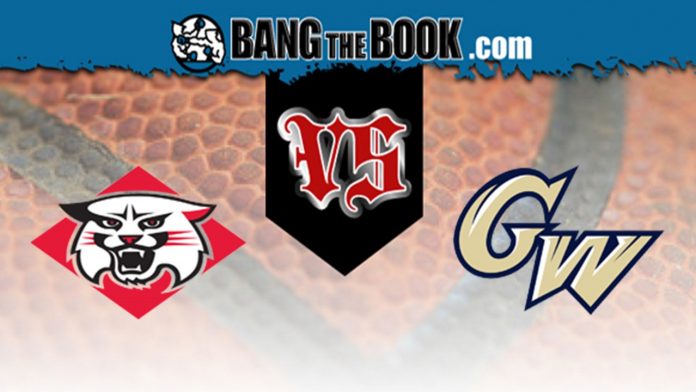 The Wildcats beat the George Mason Patriots in their last outing, 68-53. Jon Axel Gudmundsson was the game’s high scorer with 27 points on 9-for-15 shooting. The Wildcats made 11 of their 14 free throws (78.6 percent) and held the Patriots to an effective field goal percentage of 0.375 (below their season average of 0.478).

In the Colonials’ previous outing, they defeated the Saint Joseph’s Hawks, 85-69. George Washington was led by Chase Paar, who recorded 10 points and 11 rebounds. George Washington played a nearly perfect game. They had a superb turnover percentage of 9.6 (better than their season average of 16.3) and an effective field goal percentage of 0.643 (above their season average of 0.488). Saint Joseph’s was 17.1 and 0.518, respectively, for those same stats.

Half-court execution will be at a premium when two of the country’s slowest-paced teams go head-to-head. George Washington currently ranks 298th in possessions per game (66.8) and Davidson is 324th (66.1). Additionally, the Wildcats rank 47th in turnover percentage (17.0 percent), while the Colonials rank 329th in opponents’ turnover percentage (16.8 percent).

This will be the first matchup of the year between these two teams, after the Wildcats won the lone game last season, 73-62. The Wildcats’ turnover percentage was their biggest strength over the Colonials. Davidson had a rate of 10.0, while George Washington posted a mark of 20.6.

The Colonials’ average margin of victory in their last five games has been 7.2, up from 0.1 for the season.