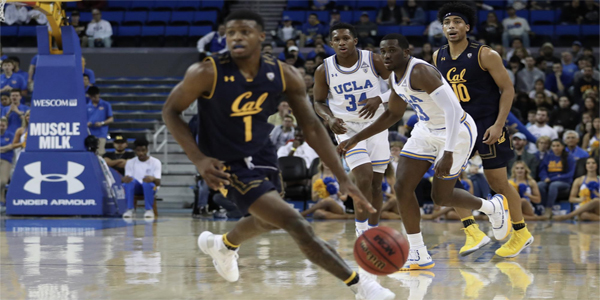 We don’t have a whole lot of choices for today’s spotlight college basketball preview. There are games spread out throughout the day, but late games are virtually non-existent. That leaves us with the matchup at Pauley Pavilion between Cal and UCLA. The Bruins are favored by 8.5 in the marketplace with a total of 132.5.

The total has been rising on this game since the open and there is a -9 out there in the market, so UCLA and the over look like the preferred sharp sides, considering most public bettors are still working their way through their handicaps on the NFC and AFC Championship Games.

This would be a second straight game for UCLA with some steam. The Bruins were bet into a home favorite of as many as 2.5 points against Stanford before the line came back down a little bit. Any way you slice it, neither one of these teams are very good this season, as dueling 8-9 records go head-to-head here.

It is pretty clear that the transition from Steve Alford to Mick Cronin has had some growing pains for the Bruins. Cronin is more of a hard-nosed, physical, defensive-minded guy and that doesn’t seem to play real well with this group of players. UCLA’s tempo has gone 17th in the country to 300th in the country per Ken Pomeroy. Scoring hasn’t really been UCLA’s problem, but the team’s defense is deplorable, a big reason why this line has jumped up a couple of points from the open.

The biggest worry for UCLA backers in this one is three-point defense. The Bruins rank 346th in the nation in that department. Opponents have made 39.7% of their three-point shots. The only thing that Cal does well on offense is make threes. They are in the top 100 nationally at 34.8%. Cal doesn’t shoot a lot of them, though. Their share of three-point field goals is 27.7%, which is the 345th rate of three-point attempts in the country.

Cal really, really struggles in the offensive halfcourt. Not shooting threes when that seems to be the best option is coaching malpractice, but Cal also ranked 342nd in assist rate on made field goals at 41.2%. They don’t share the basketball well. They don’t offensive rebound well. They are 272nd in the nation in 2P%. They rank in the bottom 150 in TO%. They are 230th in eFG%. This is just a bad team for the most part. The schedule has been a bit tough for Cal to this point, but they have had several offensive duds over the course of the year.

Cal is also 8-2 at home and 0-7 in road and neutral settings. The offensive numbers get far worse at that point. Cal is actually shooting 24% on three-point tries away from Berkeley. So much for shooting the 3 well. The Golden Bears are 352nd out of 353 teams in eFG% in non-home environments. They are very bad when not playing in Berkeley, which is a reason why this line has moved up a bit.

The Cronin growing pains have really been on display lately. UCLA has one win in its last seven games. Of course it was a road win at Washington, which is nothing to sneeze at, but UCLA was dominant on the offensive glass in that game and created some second-chance opportunities. That possibility is very much here against Cal. Furthermore, that is one attribute of Cronin teams that has translated quickly for UCLA. The Bruins are top 20 in both ORB% and opponents ORB%, so they have become sponsors for Windex this season in a big way.

With ORebs comes free throw chances and UCLA’s FT Rate is 56th in the nation. They are leaving some points out there on putbacks and free throws, but you can see the signs of a decent team. They just need to knock down some more shots and also play some better defense. Opponents are teeing off from 3, which is why UCLA’s eFG% on defense is 293rd in the nation at 52.6%.

With a limited card and limited options, it is nice that this game works out in such a way that UCLA looks like the side. Cal has been so bad away from home that the 8.5 probably isn’t enough to cover the fact that UCLA is just a better team and that is magnified by Cal’s lack of anything positive in road/neutral environments.