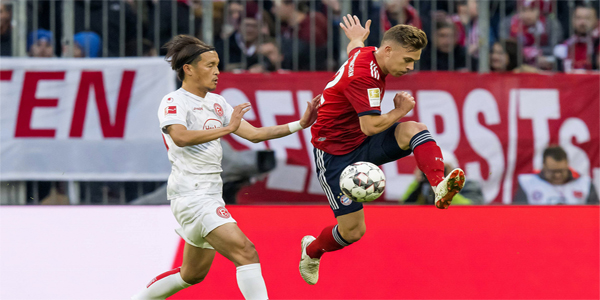 With a record of 20 wins and four losses, with four draws and 64 standings points, Bayern Munich has pulled out seven points ahead of Borussia Dortmund, and is relatively assured of winning the Bundesliga for the eighth straight year, with Dortmund having to settle for the runner-up spot (provided it is able to hold on) for the fifth time during that period.

But BetAnySports customers who love their “football” are going to wager on it just the same.

So, aside from the fact that they have just come back to action after a hiatus, what does Bayern have in the way of incentive?

Well, there’s always something. Widening the gap between themselves and BVB is one consideration, so that they can put things completely to rest. And then there’s the spark that can be provided by a star who still feels he has to accomplish something.

Robert Lewandowski is one of the most potent goal-scorers in the world, having scored 40 goals across all competitions for five consecutive years. He has been the Bundesliga’s Player of the Year. But he was scoreless for Poland in three appearances in the 2018 World Cup (he’ll have to wait until 2022 to do something about that). And he has never made the first team of the World 11.

Another thing he’s never done is score a goal against Fortuna Dusseldorf. And it is something he thinks about. So he’s got something to shoot for (both figuratively and literally) when he steps onto the pitch on Saturday (12:30 PM ET) for a home game at Allianz Arena.

At BetAnySports, Bayern is the sizable favorite:

Lewandowski has spent his time in the Bundesliga split between Borussia Dortmund, his previous club, and Bayern Munich. And in five matches in those uniforms that have been played against Fortuna, he has gone scoreless. That’s a huge void for someone who has earned his reputation as a striker.

Coach Hansi Flick concedes that Lewandowski is well aware of his “dry” record against this opponent. He is seeking his first title as a coach, and knew that it might be choppy coming back out of the gate after the COVID-19 hiatus. But he expressed that he was encouraged by the early workouts, and is happy about how the team has adjusted thus far.

They haven’t had to step too far in taking absolute command in the league. And they were aided somewhat by Dortmund’s injury loss of Erling Haaland last time out, although it should be mentioned that he only missed the last 18 minutes of play.

Flick has received wide praise for his “turnaround” project, which would, on the surface, seem like a strange things to say about a team that had previously won seven straight league championships. But under Niko Kovac, the team got off to an extraordinarily slow start, dipping as low as seventh position in the Bundesliga table, and after a 5–1 loss to Eintracht Frankfurt, management had enough, sacking Kovac and inserting Flick, after which things took off.

Fortuna is in the lower depths of the standings, in 16th place, with 27 points and 53 goals allowed. Actually they aren’t even close to being the most defenseless team in the league. But they have scored fewer points than everyone but Werder, so although we aren’t all that enthusiastic about the goal “spread” here, we can see ourselves backing the total (under 4) and taking a small price – even if Lewandowski does manage to put a light on the scoreboard.

Wager on all the great Bundesliga action at BetAnySports, where you have alternate lines to take advantage of, as well as Sports Betting Prime, where you can wager on the matches in progress……… Don’t forget that you’ve got five different casino options, including the Vegas Live Dealer and Lucky Live Dealer, providing a lot of real-time thrills………. Get your account opened by using a debit or credit card, person-to-person transfer or the virtual currency of Bitcoin, which is fast and easy with their automated system, and NEVER incurs a transaction fee!