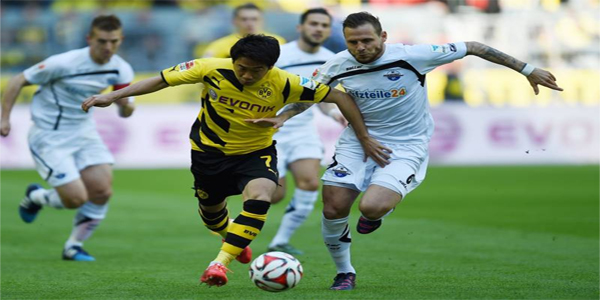 Few newcomers in recent years have made such an impact on a Bundedsliga roster quite like Erling Haaland, the Norwegian striker who has been the principal engine propelling Borussia Dortmund to a second-place position in the Bundesliga, Germany’s top-tier football (soccer) organization.

Now comes word that he will miss the club’s Sunday road game against Paderborn, which has had an effect on the odds that are posted at BetAnySports.

Halland limped off the field with a knee injury against Bayern Munich, as he collided with an official in the 72nd minute. Dortmund lost 1-0, making things very tough for them as the schedule plays out. Now, it gets tougher, although BVB coach Lucien Favre indicated that he won’t miss a lot of time. In fact, speculation is that he would be able to return for the game against Hertha next week. .

At the age of 19, Haaland has become one of the world’s hot commodities.

And he has scored 13 goals in the fourteen games he has played for Dortmund, although he has been held scoreless over the last two. Prior to his current post, he had 17 goals in sixteen Austrian league appearances for RB Salzburg.

Dortmund is seven points behind Bayern Munich and it doesn’t look like they’re catching up. At BetAnySports, Bayern is the prohibitive favorite for Bundesliga honors:

Haaland may be the most hyped young player in the world right now. And the general consensus is that Dortmund pulled a major coup in being able to sign him ahead of Real Madrid (of Spain’s La Liga), which was said to be very interested in him, and in fact, remains interested, as he is said to be their top “target.” His market value is said to be around €75 million.

But one must remember that his contract with Dortmund is in effect through 2024, and there is nothing in that deal which indicates he can exercise an “escape” clause. But Jan Aage Fjortoft, a fellow Norwegian and former striker in the English Premier League, believes that the day will come when Haaland winds up playing in the EPL. maybe that is with Manchester United, which might be the only club that could afford him when the time comes. But maybe it’s with Leeds United, if sentimentality comes into it. That is the EPL side that his father was playing for when he was born, and consequently, it’s his hometown. And he has expressed that his dream is to win the Premier League with Leeds.

Well, his current mates will have to wn it without HIM on Sunday, and here are the numbers on that, from BetAnySports:

Fortunately, BVB is not in much danger this weekend. Paderborn has been an awful side, with four wins and 17 defeats (seven draws), last in the Bundesliga in points and with just a little more than one goal a game scored. And frankly, you can’t expect a whole lot from this team, since, after all, they were playing in the third tier of German competition just two years ago.

Take note that seven of Dortmund’s last nine victories have come by two goals or more. And of course, that was with the great youngster on the pitch. You can get close to even money with the goals prop, but is there any doubt as to the fact that, coming off the crushing defeat, wouldn’t they be focused enough to beat the weakest team in the Bundesliga? We’d lay the -291 price as it is posted.

NFL Playoff Picks — Here is Why the Browns Can Win…....