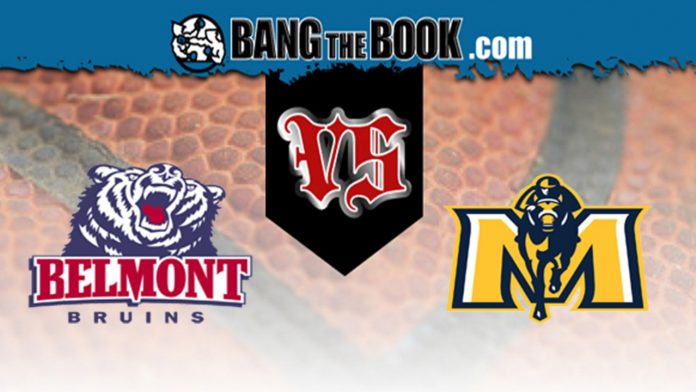 The last time the Bruins played, they had no trouble getting past the Morehead State Eagles, 77-59. Nick Muszynski was the top scorer from either team with 20 points on 8-for-10 shooting. Belmont dominated nearly every stat category in the game. They had a free throw rate of 0.136 (below their season average of 0.148) and an offensive rebounding percentage of 38.5 (above their season average of 26.5). Morehead State was 0.062 and 25.0, respectively, for those same stats.

The Racers come in on a high note after beating the Southeast Missouri State Redhawks in their last matchup, 96-91. Murray State was lifted by Anthony Smith, who put up 22 points and 10 rebounds. The Racers had an absurd free throw rate of 0.519 (above their season average of 0.277) and had an effective field goal percentage of 0.663 (above their season average of 0.537).

This is the first time these teams will go head-to-head this year. Each won one of the two games played against each other last season. The Racers won the last contest 77-65. The Racers dominated nearly every stat category in the game. They had a superb offensive rebounding percentage of 30.6 and a solid free throw rate of 0.258. The Bruins had marks of 14.6 and 0.125, respectively, for those same stats.

Both teams have had a player trending in the right direction over their last five games. For the Bruins, it’s been Muszynski, who has averaged 16 points,9.2 rebounds,1.2 blocks, while the Racers have gotten great contributions from KJ Williams (15 points,7.2 rebounds).

The Bruins average 19.0 assists per game, which ranks second in the NCAA. The Racers rank 47th in assists allowed per game (10.8).

The Racers’ average margin of victory in their last five games has been 13.0, down from 13.2 for the season.

Sammy Watkins Props: Will He Be a Key Guy on Super...