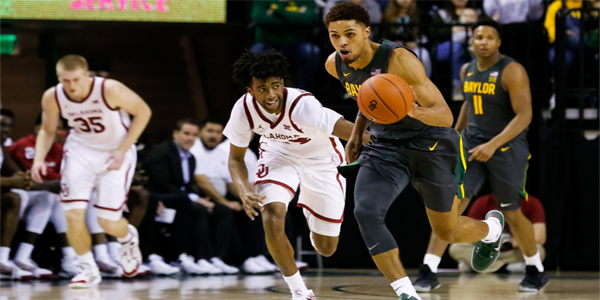 There are a lot of different ways we can go with the spotlight college basketball preview for January 25. There are 143 games on the betting board for Saturday in college hoops and tons of marquee matchups. So many intriguing games, so little time.

Let’s see if we can build off of an easy winner last night with Wright State by examining the game between Baylor and Florida. The SEC/Big 12 Challenge got some run this week on BangTheBook Radio and it was also mentioned in my college basketball situational spots article. We even got a free pick look-ahead on this game from Brad Powers on Thursday’s edition of the podcast.

That being said, this line is not where we expected it to be. Florida is now a 2.5-point favorite at BetDSI Sportsbook and across most of the market. The line opened -1 and shot up from there. The total is sitting pretty at 130.5 for now, but this will be a popular game for both public and apparently sharp bettors.

The newly-minted #1 team in the country is Baylor and that was thought to be a fade angle in some circles with this random game in Gainesville in the heart of Big 12 play. Influential bettors seem to be following through with that angle, among others. Keep in mind that some places, including BartTorvik.com, had Florida as the #1 team in the country coming into the season. To this point, Florida has been a big disappointment, particularly with the blowout losses to Florida State, Butler, and Missouri and the loss to Utah State that looks worse by the day.

Michael White’s team just can’t get over the hump. The road loss at LSU by a bucket would have been a big, signature win, but the Gators are still in search of one of those away from home. This game is at home, however, where the Gators disposed of Auburn last weekend and held the Tigers to 47 points on .75 points per possession.

Signature wins haven’t been an issue for Baylor. They already own scalps of Texas Tech and Kansas on the road and also beat Villanova at home. The only loss for Baylor remains the Week 1 defeat in Alaska when the Washington zone held Baylor to a season-low .843 PPP. Aside from that, the Bears have taken care of business in all of their other games.

There are some distinct advantages that we can use to make a case for both sides in this game. We’ll start on the Baylor side. The Bears attack the offensive glass really well. Their ORB% is sixth in the nation per Torvik. The Bears are also top five in adjusted defensive efficiency and 11th in eFG% on defense. They also rank in the top 40 in forcing turnovers and in the top 70 in not turning the ball over.

Baylor ranks sixth in 2P% defense at 41.5% and has one of the better block rates in the country. It is tough to get to the rim on the Bears. We’ve seen Scott Drew have some good teams in Waco, but they always tend to find a patch of inconsistency. Sometimes it happens during the regular season to hurt the team’s NCAA Tournament seeding. Other times it has happened in the tournament itself. To this point, it looks like this may be the most consistent team he has had, but there is a lot of season left.

Florida has some advantages as well. Though the Gators have six losses, they have played the tougher schedule between the two teams. Florida has also been more efficient on offense, particularly inside the arc. The Gators are also at home here in an unfamiliar setting for Baylor, with a fan base that will show out for a marquee game and a chance to knock a #1 team off of its perch.

The Gators are a younger team than Baylor, which partially explains the inconsistency of the season to date. Senior Kerry Blackshear Jr. is the unquestioned leader of the team, but Florida is running out three sophomores and four freshmen to play prominent minutes. You do have to wonder about the composure of Florida in a game like this, particularly against a more experienced Baylor squad. Baylor has two sophomores in Jared Butler and Davion Mitchell carrying a lot of the load, but upperclassmen like Freddie Gillespie, MaCio Teague, Devonte Bandoo, and Mark Vital are stabilizing forces.

It is fair to wonder how long Baylor can keep this up. In six conference games, the Bears are shooting 30.5% from 3 and 43.9% from 2. Make no mistake, this is far from a Big 12 game, but Florida is on the level of some of the very good teams in the conference. From a quality of competition standpoint, it might as well be a Big 12 caliber game.

Florida, meanwhile, has shot 37.7% from 3 and 51.9% from 2 in SEC play, but has only managed a 4-2 record. It looks like we have a classic case of an underachieving team at home against an overachieving team. The market has responded in kind to move this number up on the Florida side and you can see why.

The problem is that we have to trust Florida in order to fire on a number that has grown a little bit larger since it opened. Do we trust Florida here? Is this enough of a step up for Baylor, in a unique environment, to fade the Bears?

To me, this game looks every bit of a toss-up. Instead of picking a side, I’m going to look at the total and go under 130.5. Baylor has not played a game over 66 possessions since the last non-conference tune-ups against Jackson State and UT Martin. In big games, for the most part, Baylor has slowed down even more than usual. Florida doesn’t mind playing slow.

There is also likely to be a feeling out process in the early going with two teams that don’t play each other. That usually leads to some slower basketball and longer possessions.

NFL Betting — Dolphins in an Offensive Mess as They Face Bills

Results Are All That Really Matter

Bet On Alabama vs Clemson at Bovada