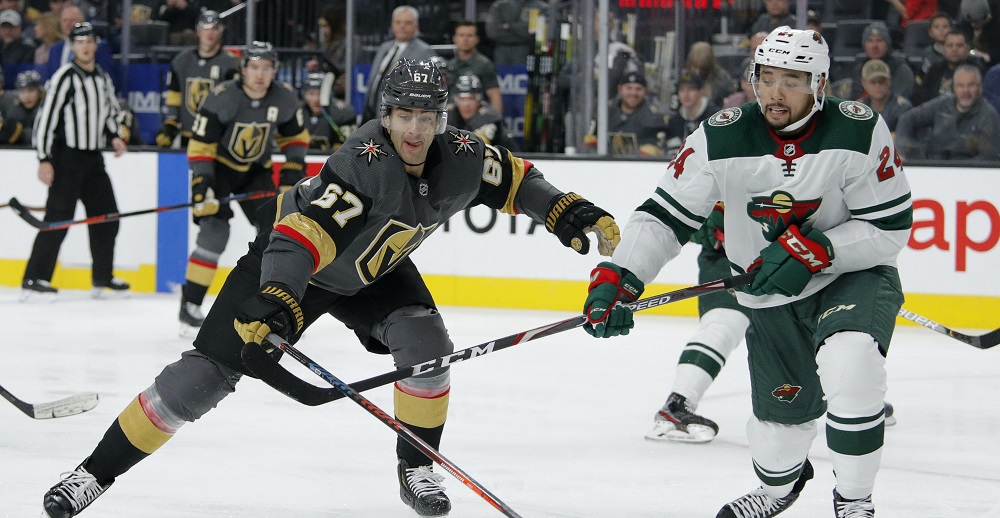 The only NHL game on the betting board is one that everybody wants to see. Well, unless you’re a Vegas Golden Knights fan. With Minnesota on the ropes and a 3-1 series lead, the Knights have failed to close out the series twice, leading to this decisive Game 7 at T-Mobile Arena on Las Vegas Blvd.

You don’t often get to play with house money in Sin City, but the Wild are in that place and all of the pressure is on Vegas to do what needs to be done in this game. Vegas is still the -180 favorite at BetUS Sportsbook with a total of 5.5. Bettors seem to be approaching this game rather tentatively, as the dynamics of the series have changed in a big way.

Cam Talbot stole Game 5. That was the headline and it was the rationale from those that bet Vegas in Game 6, myself included. Well, Minnesota didn’t need Talbot to steal Game 6. They played maybe their most complete game of the series in the 3-0 win. Vegas had more shot attempts and looked better in Corsi and Fenwick, but the high-danger scoring chances fell in Minnesota’s favor.

It was a similar performance to what we’ve seen from Minnesota in their other games in the series. They kept Vegas to the outside and Talbot wound up seeing a lot of low-percentage shots from areas of the ice that guys rarely score from. It was exactly the type of game Minnesota needs to play in order to be effective and they’ve done it pretty well at various points throughout the series.

The flight back to McCarran Airport had to be a pretty happy one for Minnesota. Certainly they want to win Game 7 and keep the season going, but they’ve done what they set out to do after losing back-to-back games at home. They forced a Game 7. It was the only chance that they had to win the series. Now they’ll get that chance.

Talbot’s play is a big part of the reason why. He’s stopped 177 of 189 shots in the series for a .937 SV%. Minnesota has needed him to come up big. The Wild only have one power play goal in the series. Only Joel Eriksson Ek and Ryan Hartman have scored multiple goals. Ek, Hartman, and Kevin Fiala are the only players that have generated at least one expected goal for (ixG) at 5-v-5 in the series.

Minnesota will have to rely heavily on Talbot here, especially early on in the game, as Vegas could have a first period akin to what we saw in Game 1 with 20 shots on goal.

It would be hard to say that the Golden Knights have played poor in this series. Secondary scoring hasn’t really been a thing. Mark Stone and Alex Tuch have scored seven of the team’s 14 goals. The Knights only have two power play goals themselves. Special teams have been a problem both ways in this series.

Questions about Marc-Andre Fleury’s play seem fairly unfounded. From a SV% standpoint, he’s right there with Talbot in this series at .935. Talbot has been under more duress throughout the series and Fleury’s two most recent games have gone under the microscope, but the Golden Knights are not in this spot because of Fleury.

They’re in this spot because they haven’t generated enough high-quality scoring chances. They haven’t had enough opportunities in the slot or in close proximity to Talbot. As much as Vegas has won certain stats on the scoresheet, only Tuch, Keegan Kolesar, and Reilly Smith have over one ixG at 5-v-5. Even Stone only has five shots at 5-v-5.

That is a testament to what Minnesota has been able to do and how the Wild have had such a workmanlike effort to balance out what seems like a pretty clear talent disparity in this series. Vegas needs to find a transition game or find a way to funnel pucks to the middle of the ice. If that adjustment gets made, they’ll win Game 7. If not, it could fall on the goaltenders again.

This is a tough game to call. Vegas is deserving of being the favorite, but probably not to this degree. The series has been pretty close in a lot of ways at 5-v-5 and neither power play unit has really gotten it going. Vegas has one more scoring chance 5-v-5 than Minnesota, but Minnesota has five more high-danger scoring chances. The Wild have gotten pucks to higher-percentage scoring areas with more frequency than Vegas.

That’s enough to take a chance on the Wild in the decisive Game 7.