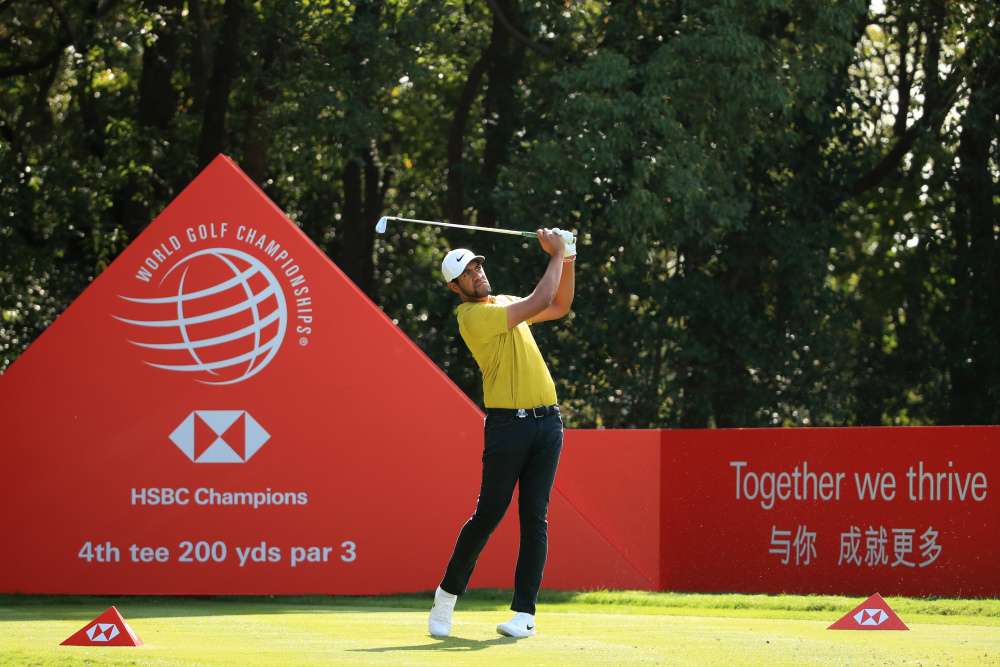 This week the players head to China and the Sheshan International Golf Course for the World Golf Championship – HSBC Invitational. WGCs typically sit just behind major tournaments in terms of prize money and field strength. This final WGC event of the year is no different in terms of potential winnings, but due to it being situated in the swing season the field is considerably weaker than typical WGC events. With that being said we will see Rory, along with past champions Rose and Schauffele out of those in the Top 10 in the world. To be clear, this is by no means a weak field and is far stronger than the previous two Asian Swing events. Deki, Casey, Finau, Fleetwood, Reed and Scott round out a solid group of favorites. We will also see Spieth on a tree lined golf course which usually equals a nice week in head to heads. With that said, let’s take a look at Sheshan International. It is also important to note that a lot of the players competing this week will be coming over from a Euro Tour season that has by no means shut down. Make sure you check current form from those events prior to staking any wagers against players who predominantly compete across the pond.

The Sheshan International course is a pretty standard par 72, measuring out at 7,261. Apparently ShotLink doesn’t exist during the Asian Swing, so strokes gained data from past renditions are not available. What is clear is that Sheshan will give up a ton of birdies as winning scores have come in anywhere from 14 to 24 under. The winners list suggests that a top flight player will be successful this week with Xander, Rose, Deki, Watson, DJ, Kaymer, Molinari and Phil being 8 of the last 9 winners. The course features 4 par 5s, all easy and reachable along with a drivable Par 4 at the 16th. The weather looks ton be dry, sunny and calm so I expect another week of low scores.

The greens here are Bentgrass and are, as stated in prior previews, the most preferred surface on Tour. Sheshan’s greens are slightly smaller than Tour average, without dramatic undulations that are often seen. They have played soft in past years, susceptible to approach shots and run anywhere form a 11.5 to a 12.5 on the Stimpmeter. While it is hard to predict who will have the hot putter week to week, it will be important to get it close in order to have plenty of birdie opportunities on these relatively easy greens.

The tree-lined fairways at Sheshan will require players to keep it in play, and the statistics from previous renditions suggest that it is harder to hit these fairways than the average Tour event. Once in the fairway on the Par 4s, players will be playing short irons and wedges into greens. This means length along with driving accuracy will be important over the 4-day no cut tournament.

I have to admit, without strokes gained data from the previous two Asian Swing events and form data due to few of these guys not playing much since the end of the 2019-20 Season this isn’t the worst tournament to take off. There is also zero chance that stops me from looking for a winner so onto the plays!

Corey Conners +6350 – Conners notched a win this year way back in April at the Valero Texas Open and after a bit of a rough stretch seems to has regained his form. The thing I love most about Conners this week is that he has played in the previous two Asian Swing events, finishing 6th and 12th, meaning he is completely acclimated to the time change. Throw in a 13th at the Safeway prior to heading overseas and that is three straight T15 finishes. That 13th at the Safeway came on the back of gaining 5 Strokes on Approach and while there isn’t SG data available for his past two finishes, the fact that Corey is 7th on Tour in SG: APP in 2019 makes it easy to surmise how he came upon success the last two weeks. On a course where hitting it close is paramount, getting a previous winner this year at 60/1+ with those proven iron skills is too short a price to pass up.

Ian Poulter +7550 – Sticking with the theme of recent success in Asia, Poulter is extreme value here. A 13th and a 16th finish the last two weeks for the multiple worldwide winner follows the same logic in respect to acclimation in Asia as Conners. While I am by no means a course history truther, when there is a lack of strokes gained data it is necessary to look closer and Poulter’s history at Sheshan is difficult to ignore. He has never finished outside the top 30 in this event (ignore his win here as it was at a different track), including multiple top 10s. Considering his price alongside

Erick Van Rooyen Top 20 +180 – With a small 78-man field the Top 20 market is very much squeezed this but I’m happy to grab an absolute bomber at close to 2/1. Van Rooyen will absolutely gain strokes off the tee this week as he is one of the longest players in the world. His experience amongst PGA players this year is somewhat sparse, but between the Canadian Open, PGA, U.S. Open and British he has gained almost 15 strokes on approach. The issue is Van Rooyen sucks at putting, but if you’ve ever read here you know my soft spot for bad putters. If he brings his Major game to China, he easily has enough to compete with the best.

2u Cam Smith (+100) o Jordan Spieth – I foreshadowed this play in the intro and Spieth on a course with trees is an auto fade. Spieth threw together a very respectable 8th in Korea at the CJ Cup event, a course where you can absolutely spray it off the tee. That was followed up by a 66th last week which basically equals DFL when you count all the auto exemption guys that got a spot in Japan. Given his finish it is no shocker that the Zozo penalized wayward drives. Spieth simply cannot find the fairway right now. Along with fairways, Spieth seems to be trying to find his game as a whole considering this is his 3rd appearance in a row, a scheduling situation usually reserved for the most fringe Tour players during the Swing Season. While Cam Smith is not the most exciting player to back in a head to head, there is a bit of solace to be taken in the fact that he finished 3rd in his last start and 13th in the start before that. That is what we have on Cam as his stats will now wow you, but this is must more a play on Spieth who seems to simply be broken off the tee.

That is it for this week’s breakdown! Thank you for reading. My Outright plays are below, look for my full card on Wednesday morning and as always feel free to shoot me any questions on Twitter @jmazzjd!