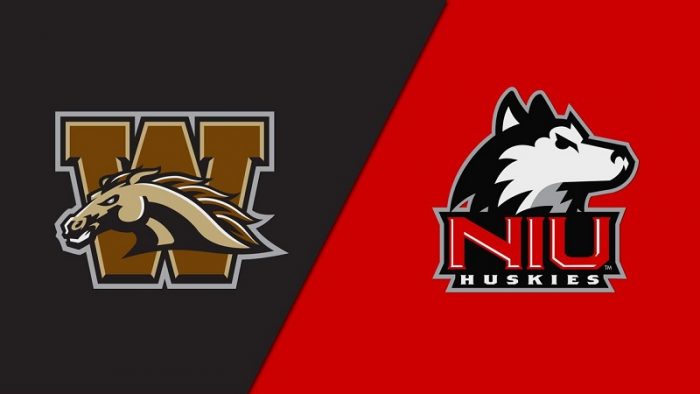 Week 13 of the 2021 CFB season starts Tuesday, November 23, with the Mid-American Conference battle at Huskie Stadium in DeKalb, Illinois, so we have prepared the best Western Michigan vs. Northern Illinois betting pick and odds.

According to BetDSI Sportsbook, the Broncos are 3.5-point road favorites with a total of 62.0 points. Western Michigan is listed at -170 to win straight up, while Northern Illinois sits at +150 moneyline odds.

The Broncos blew a big lead in Week 12

The Western Michigan Broncos (6-5; 4-6-1 ATS) are coming off a tough 22-21 home loss to the Eastern Michigan Eagles this past Tuesday. It was their third defeat in the last four outings, as the Broncos blew a 12-point third-quarter lead, allowing 13 unanswered points to the Eagles.

The Broncos racked up 485 total yards last week and yielded 422 in a return. Sophomore QB Kaleb Eleby went 22-of-29 for 307 yards, a TD, and an interception, while sophomore WR Skyy Moore had 12 receptions for 181 yards and a TD.

The Huskies clinched the MAC West

The Northern Illinois Huskies (8-3; 7-3-1 ATS) outlasted the Buffalo Bulls 33-27 in overtime last week to clinch their spot in the Mid-American Conference championship game. It was their second straight victory and seventh in the last eight outings at any location.

The Huskies nearly blew a 14-point lead against the Bulls. Clint Ratkovich’s 25-yard TD run sealed the win in overtime, while Northern Illinois finished the game with a whopping 308 rushing yards on 47 attempts.

Junior signal-caller Rocky Lombardi completed 17 of his 27 pass attempts for 197 yards. Over his last four outings, Lombardi has thrown for seven touchdowns and just one interception. The Huskies are scoring 31.6 points per game (tied-45th) while allowing 32.7 (109th).

It’s tough to predict the final score because the hosts will rest some players and the visitors have nothing to play for. The betting trends are suggesting the Huskies, who have won four of their last six games by six or fewer points, so I’ll go with the hosts to cover.

The previous two encounters between Western Michigan and Northern Illinois have been decided by three points, and we should see another thrilling clash. The Broncos will struggle to cope with the Huskies’ rushing, so the hosts should keep it close even with some of their best players on the sidelines. Northern Illinois averages 228.4 rushing yards per game (11th in the nation) and 5.0 per carry (tied-34th).

Both Western Michigan and Northern Illinois have struggled on the defensive side of the ball lately, so the total has gone over in four of the Broncos’ last six games and four of the Huskies’ previous five.

The last two meetings between the Broncos and Huskies have gone in the under, but we should see a high-scoring affair this time around. Western Michigan has allowed 31 or more points in five of its last six outings, while four of Northern Illinois’ last five games have produced 60 or more points in total.