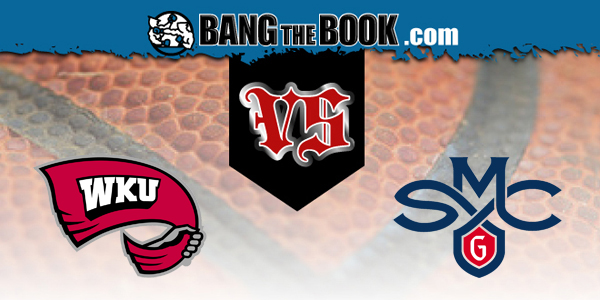 College basketball returns tonight as the NIT takes center stage with matchups featuring Toledo vs. Richmond and Saint Mary’s vs. Western Kentucky. The Rockets have been a popular pick with money coming in on the lower-seeded MAC team to drive the line up to Toledo -2.5.

Our focus will be the late game between Western Kentucky and Saint Mary’s. The Gaels are -2 with a total of 125 at Bovada Sportsbook in what is expected to be a low-scoring game. SMC is one of the slowest teams in the country, while WKU has some major offensive concerns.

Motivation is always a major question mark for teams participating in the NIT. Western Kentucky had a chance to make the NCAA Tournament, but came up short in a 61-57 overtime loss to North Texas. The Hilltoppers led by seven with 2:58 left, but failed to score the rest of the way in regulation.

Two three-pointers from North Texas in the final minute tied the game and WKU missed a game-tying layup attempt with five seconds left in overtime. All of that happened on Saturday. Now the Hilltoppers have to shake off the disappointment to go play in the NIT down in Frisco, Texas. It is not an ideal situation at all for backing this team. This is not the tournament that Rick Stansbury and his team wanted to play in.

But, here they are. Now you wonder if they can refocus and get back to business or if they’ll roll over in this one. They certainly didn’t roll over in the C-USA Tournament title game when North Texas scored the first 17 points. That was for a shot at the NCAA Tournament, though. This is not.

The Hilltoppers do have the best player on the floor in junior Charles Bassey. They also have a senior who isn’t ready for his career to be over yet in Taveion Hollingsworth, the player that missed the game-tying layup attempt. WKU’s biggest issues are taking care of the basketball and three-point defense. The Hilltoppers turned it over more than 21% of the time. Opponents shot 35.8% from three, so they made the turnovers hurt.

WKU is ninth in the nation in FT% going into this one, which is a big reason why the Hilltoppers are 11-5 in games decided by six or fewer points. If this one is close, as the spread projects, that could be an interesting stat to follow.

The Gaels had no delusions of making the NCAA Tournament. They were only able to play 10 conference games because of COVID pauses and lost by double digits three times to Gonzaga, including the WCC Tournament semifinals. Saint Mary’s also lost by double digits twice to BYU. The team’s other losses came against San Diego State, Memphis, and Santa Clara. In other words, when Randy Bennett’s team stepped up in class, it went poorly.

It just wasn’t an impressive season from a program that is usually one of the strongest mid-major squads in the country. Even some of their wins were way too close for comfort, especially in conference play against teams like Loyola Marymount, Pepperdine, and San Francisco. Saint Mary’s was 0-7 in Quality Games, including a 0-6 mark against Quadrant 1 teams. The Gaels were also 6-2 in close games decided by six or fewer points.

SMC is still stout defensively. That much hasn’t changed. Without a go-to scorer, though, the Gaels go into this game with an eFG% of 47.6% and a 3P% of just 29.3%. They take much better care of the basketball than Western Kentucky, but are a very poor offensive team.

Like WKU, the Gaels were solid defensively inside the arc, but struggled outside of it. Saint Mary’s did allow the third-lowest 3P Rate against at 27.5%, so Western Kentucky may not get many good looks from beyond the arc. That isn’t a big part of the Hilltoppers’ offensive strategy anyways. Lots of things run through Bassey and go towards the rim. That will test the interior defense of the Gaels.

Motivation is tricky to handicap for the NIT. Western Kentucky may be happy to play another game. Coaches will tell their players that only three teams can end their seasons with a win and those are the winners of the NCAA Tournament, CBI, and NIT. Whether or not the teams buy in is another story.

Western Kentucky suffered such a heartbreaking loss just a few days ago that you have to wonder about the team’s mindset here. On the other hand, Saint Mary’s simply isn’t very good. WKU had 112 dunk attempts to just 18 for SMC. WKU did take a lot more mid-range jumpers, which is a poor offensive strategy and will play right into what the Gaels want.

Still, I think Western Kentucky is the better team here. Certainly WKU has the best player in Bassey, so long as he stays out of foul trouble. Saint Mary’s doesn’t shoot threes well and Western Kentucky pushes teams into taking a lot of those outside shots. I’m on the ‘Tops here.