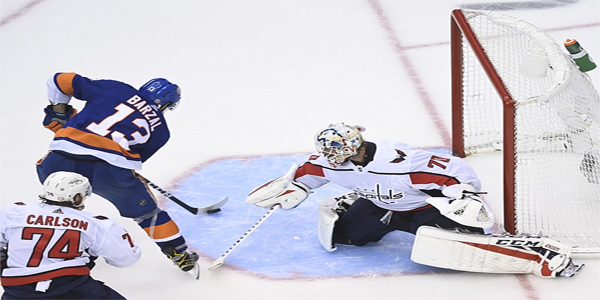 The Washington Capitals have scored five goals in three games. In a related story, the Capitals are on the verge of getting swept by the New York Islanders. The Isles can make it official with a Game 4 win on Tuesday night. It sure looks as though bettors have given up on the Capitals, as this line is virtually a toss-up at DSI Sportsbook with -110 both ways.

It makes sense. The Capitals have given no reason to believe that they are invested in this postseason. They’re getting badly outchanced at 5-v-5 by the Islanders. They’ve been outscored 8-2 at 5-v-5. They’ve been crushed in the faceoff dot. They’ve been beaten every which way by an Islanders team that was thought to be pretty offensively challenged.

All of those stats are at 5-v-5. The Capitals have put some cosmetic touches on the series by virtue of scoring three power play goals to New York’s one, but that has really been the only area in which they have had any success. That is not the series that Washington and head coach Todd Reirden expected.

Of course, this is probably the exact series that former Capitals head coach Barry Trotz envisioned. He probably wasn’t sure his team could make it a reality, but Trotz is one of the best in the league when it comes to X’s and O’s and he has proven it here in this series to say the least.

Things sort of spiraled out of control for the Capitals long before they fell behind 3-0. Star center Nicklas Backstrom was hurt by a questionable hit from Anders Lee in Game 1 and they spent more of the game trying to get revenge than they did score goals. Braden Holtby was terrible during the regular season and the Capitals were really up the proverbial creek without a paddle when Ilya Samsonov was deemed unfit to play before the series.

Samsonov wasn’t going to take over for Holtby, but he might have been an option in Game 2 when Holtby got lit up for four goals on 31 shots. Holtby played his best game of the series in Game 4, but the Capitals offense failed to come through and it went in the overtime loss category. It just looks like Holtby, who had the worst regular season of his career, is going to have to find a way to flip the script again and give his team a chance…assuming Washington wants to try and claw out of this 3-0 hole in the bubble.

To me, this looks like a spot where the Capitals will just be looking to inflict punishment on Lee and his teammates for taking out Backstrom, which changed the complexion of the entire series.

The Islanders should finish this on Tuesday night.

TAKE THE ISLANDERS TO FINISH THE SWEEP ON TUESDAY NIGHT