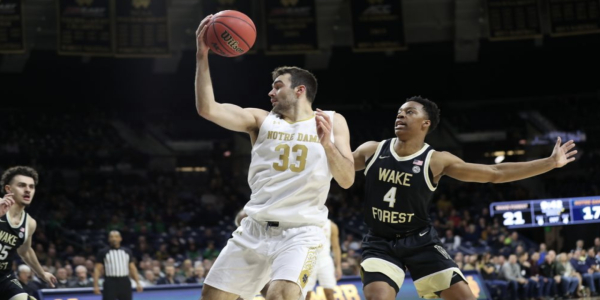 The ACC Conference Tournament gets underway on Tuesday with a trio of games. The late game of that equation is a 7 p.m. ET tip in Greensboro between Notre Dame and Wake Forest. This is the 11 vs. 14 game from the ACC Tournament and the winner will draw into a Wednesday matchup with the North Carolina Tar Heels.

In this one, Notre Dame is a favorite of eight points per the oddsmakers at Bovada Sportsbook with a total of 143. We’ll see whose season will keep going and whose season will end in this March 9 spotlight game.

Wake Forest had a rough season. The Demon Deacons are in a bit of a transitional phase with head coach Steve Forbes in his first season. Danny Manning was thought to be the answer, but with only one NCAA Tournament berth on his watch back in 2017, the Deacs felt it best to get Forbes from East Tennessee State.

Wake Forest went 3-15 in ACC play and would need a win here to avoid its worst conference record since 2016. An extended COVID pause right after the Thanksgiving holiday put the team behind the eight ball early. With a new head coach, you’d really like to get into a rhythm and a routine, but Wake was unable to do that. The only conference wins came against Pitt, Miami, and Boston College and only the last one came on the road.

Simply put, this isn’t a good team on either end of the floor. The Demon Deacons enter this game with an eFG% on offense of 49%, which ranks outside the top 200 nationally. The bigger issue is that opponents score at will on Wake Forest. Their 54.1% eFG% against ranks in the bottom 50 in the nation. This year’s ACC is not particularly strong either, so that number stands out even more. There are not a lot of great offenses in the conference.

If we look exclusively at conference play, the numbers are even worse. Wake ranks 13th in eFG% in the ACC and 14th in eFG% defense. Opponents have made 38.5% of their three-point attempts against this team. All five of Wake’s wins have come against Quadrant 3 or Quadrant 4 opponents as classified by Bart Torvik. They are 0-16 in the other games.

Did we see a major sign of life from Notre Dame in the regular season finale? Notre Dame beat Florida State 83-73 to round out the regular season. That victory ended a four-game losing streak for the Fighting Irish, who are probably much better than their 11 seed would suggest. That’s not to say that ND is without flaws. In all actuality, they have a lot of them, including one of the lowest TO% marks on defense in the country.

This is a pretty strong offensive team. Notre Dame actually has a top-40 eFG% on offense. The Fighting Irish also head into the ACC Tournament in the top 50 in both 2P% and 3P%. Mike Bray’s bunch is also at 77% at the free throw line for the year. Offensively, this looks like a pretty legitimate team in a lot of different ways. It is the defensive end where the Irish are lacking. The low TO% has been a killer. So has the fact that opponents are shooting 35.2% on threes in conference action. That ranks eighth out of the 15 teams in this league, so not bad, but not good enough to offset the fact that Notre Dame just doesn’t take the ball away enough.

Notre Dame is also the worst offensive rebounding team in the conference. Possessions are so important and Notre Dame just doesn’t get enough extra ones, which has been a major part of the problem for them. They really need to find a way to force more turnovers if they’re going to go on a run here in Greensboro. Against a Wake Forest team with a pretty high TO% rate, it could happen.

Notre Dame is a big favorite here for an 11 seed, but it seems pretty justified. There are virtually no redeeming qualities about Wake Forest basketball this season. They don’t really do anything well. At least Notre Dame does well offensively. Wake Forest doesn’t even do that.

After the 0-5 start to league action, Notre Dame did go 7-6, including that win over Florida State. The only game against Wake Forest wound up being a blowout victory for the Fighting Irish. They could very well do the same again here and that’s the way we’ll look in this 11 vs. 14 matchup in Greensboro.