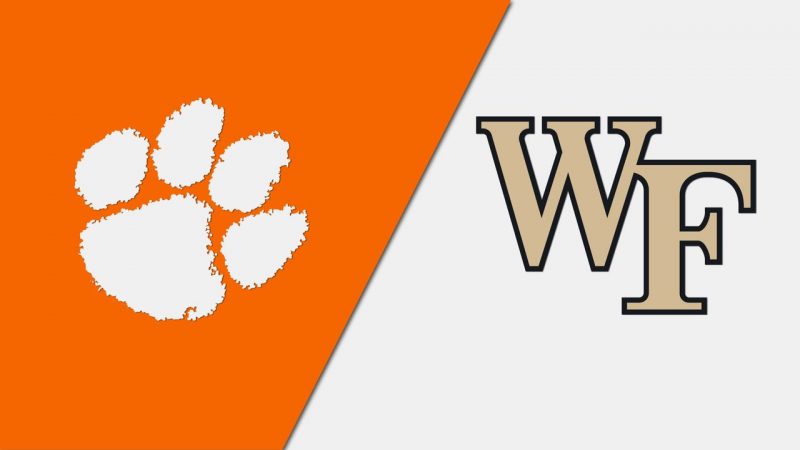 The college basketball is heating up with the conference tournaments just around the corner, so we’re taking a closer look at the Atlantic Coast Conference showdown from Littlejohn Coliseum in Clemson, South Carolina, to get you the best Wake Forest vs. Clemson betting pick for Wednesday, February 22, 2022.

The Demon Deacons and Tigers lock horns for the first time this season. Wake Forest is listed as a small 1.5-point road favorite, while the totals sit at 144.5 points on MyBookie Sportsbook.

Wake Forest bounced back from a couple of tough losses

The Wake Forest Demon Deacons (21-7; 16-11-1 ATS) stopped their two-game slide last Saturday, outlasting Notre Dame 79-74 in front of the home fans. They failed to cover a 5.5-point spread, but the Demon Deacons must be delighted to get back on the right track after a couple of narrow defeats to Miami 76-72 and at Duke 76-74.

Senior guard Alondes Williams leads the charge for Wake Forest, averaging 19.9 points, 6.9 rebounds, and 5.1 assists per game. The Demon Deacons erased a 12-point first-half deficit against the Fighting Irish, and Williams tallied 17 of his 23 points in the second half.

Wake Forest is now sitting at the fifth spot of the ACC standings with an 11-6 record, two and a half games off the top-seeded Duke. The Demon Deacons are No. 31 in the KenPom rankings and No. 40 in the NCAA NET Rankings.

Clemson lost six in a row

The struggle is real for Clemson. The Tigers (12-15; 14-12-1 ATS) extended their losing streak to six games this past Saturday, suffering a 70-61 defeat at Louisville as 1-point road favorites. They’ve covered the spread only once during that awful run.

The Tigers scored only five points in the final five minutes of the second half at Louisville. Their top scorer, PJ Hall, played just one minute before leaving with a foot injury. A 6-foot-10 sophomore forward has averaged 15.5 points and 5.7 rebounds per game so far this season. He’s questionable to play Wednesday against Wake Forest.

Clemson is now 4-12 in the conference play, laying at the 13th spot of the ACC standings. The Tigers are No. 90 in the KenPom rankings and No. 95 in the NCAA NET Rankings.

PJ Hall’s injury is a big problem for this Clemson team. Even if Hall suits up, the Demon Deacons should have enough firepower to beat the Tigers. I’ve mentioned Alondes Williams’ excellent form, while junior wing Jake Laravia (14.8 PPG, 6.7 RPG, 3.7 APG) is another guy who should lift Wake Forest over Clemson.

Furthermore, the Tigers have struggled to defend as of late. They’ve yielded 76 or more points in four of their previous five outings. On the other side, Wake Forest has hit a 72-point mark in eight of its last ten contests. This is a revenge game for the Demon Deacons, who have gone 1-7 SU and 2-6 ATS in their last eight dates with Clemson. Wake Forest suffered an embarrassing 60-39 home loss to the Tigers in their previous duel on February 24, 2021.

The Demon Deacons love to play at a fast pace. They average 70.4 possessions per 40 minutes (52nd in the country). Wake Forest is the top-50 team in the nation in both offensive and defensive efficiency, scoring 111.2 points per 100 possessions (46th) and yielding 95.5 in a return (41st).