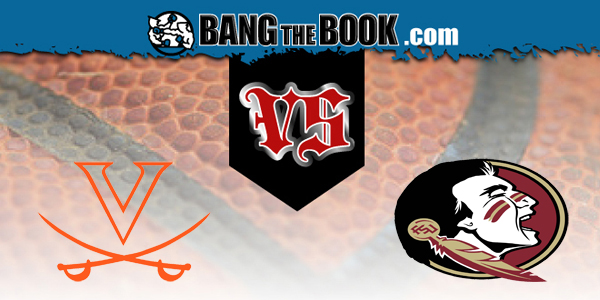 The Virginia Cavaliers and Florida State Seminoles have both encountered a few speed bumps this season, but nothing major as they head toward the NCAA Tournament.These are a couple of teams that would seem to have a legitimate shot at a Final Four berth, and both of them do some things as well as anyone in the country.

They’ll meet up in ACC basketball action on Monday at 7 PM ET at the Tucker Center in Tallahassee.

BetAnySports will give you a good head start on better odds through reduced juice, and after the game begins, you will be right on top of the action if you choose to access real-time wagers through Sports Betting Prime.

Virginia was named as the #9 overall seed in a “sneak peek” on CBS’ Bracket Preview Show. The Cavs have some great credentials. They are in the top dozen in both offensive and defensive efficiency, according to the metrics at KenPom.com. This is a team that can shoot among the best whether it is inside (21st) or outside ( 6th) the three-point arc. And they are not shy about shooting triples, as that constitutes 42% of their field goal attempts.

FSU hits threes as well(38.7%), and they are a team that is difficult to deal with on the offensive boards. They have been sloppy with the ball – in fact, when they have stumbled, it has been because they have suddenly gone cold from three-point range, or they have coughed it up to an excessive degree, or both. Examples include 9-for-32 in treys and 17 TO’s against Clemson and 3-for-14 with 20 turnovers against Georgia Tech.

Well, Virginia isn’t the kind of team that pressures a lot and forces turnovers. Their scheme – the Pack-Line Defense – involves getting back quickly and setting up. Unlike something like a matchup zone, the Cavs are very good at keeping the opposition off the offensive boards (14th in the nation in defensive rebounding percentage)

Virginia defends without fouling, which is very important. And when you are allowing just 46% in two-pointers, you are naturally doing a tremendous job. It is going to be more of a challenge than usual as they face FSU, which has more height per man than any team in the nation. Oddly enough, the Seminoles’ best path to victory might be to shoot over the zone, as that is at least something the Cavaliers will let you do.

You can make your best guess as to who would have the critical fundamental advantages here. But the value may lie not in picking the side, but picking the total.

Through the years, when Tony Bennett’s Virginia squad has played Leonard Hamilton’s FSU contingent, the games have almost always been deliberately-paced and low-scoring.

Only three times has the total between Virginia and Florida State exceeded 127.5 points. And on 14 occasions it has been at least eight points below that total.

Yes, personnel changes from year to year. But these programs are not dominated by personnel. They are dominated by the systems and philosophies of the two coaches, and that has remained consistent for over a decade.

So rather than try to pick either side, the best choice may be to go with the total, and some pretty solid history. UNDER