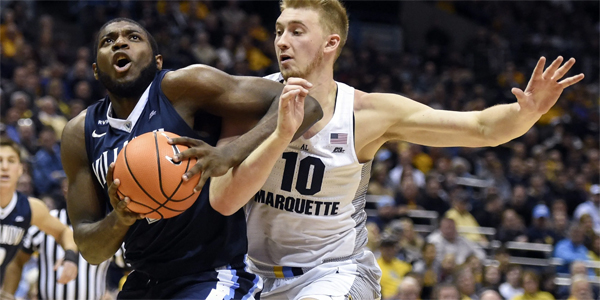 The college hoops season will take a quick break on Christmas Eve, but before that, we’ve got a slew of games on the hardwood for December 23. The highlight game in primetime will feature the Villanova Wildcats on the road against the Marquette Golden Eagles on FS1.

Morning betting action favored Villanova, who is a 4.5-point favorite at BetOnline Sportsbook with a total of 142.5. The line opened in the -3 range at BOL, so some influential bettors that play on overnights and early-morning numbers do like the visitors.

Let’s handicap the game and see if we do as well.

Jay Wright’s team is out to a 7-1 start that includes two Big East victories already. The Wildcats lost in overtime to Virginia Tech by an 81-73 score back on November 28. Otherwise, they are unblemished, including a road win over Texas down in Austin. Villanova was thought to be in a compromising situational spot on Saturday against Saint Joseph’s after playing two Big East games against Georgetown and Butler with this game on deck, but they won by 20.

Villanova usually plays all of the Big 5 teams in the Philadelphia area, but Penn is not playing because of COVID. Temple and La Salle are not on the schedule. From this point forward, barring the scheduling of a random non-conference game, the remainder of Villanova’s schedule is made up of Big East competition.

We’ll see if it holds, but from an adjusted tempo standpoint per Bart Torvik, this is the most deliberate Villanova team of the Jay Wright era. They rank 335th nationally in adjusted tempo. It has been a good look for them, as they rank second in TO% on offense, which allows them to dictate the game. They’re a top-five team in adjusted offensive efficiency.

It doesn’t hurt that Jeremiah Robinson-Earl and Justin Moore came back for their sophomore seasons. Villanova lost Saddiq Bey, but the rest of the team from 2020 remains mostly in tact. Senior leader Collin Gillespie is shooting 42% on three-pointers to make up for shooting 43% on three-pointers.

It is tough to find any flaws with this Villanova team. They are a top-15 defensive rebounding team and they’ve been solid at the free-throw line. Their base defense could be a little stronger, but it has been after a slow start and the offense covers up a lot of other deficiencies.

Life without Markus Howard has been something of a struggle for Marquette. Steve Wojciechowski’s team has actually been able to figure things out offensively for the most part, but the defensive play has been abominable. Marquette is shooting 38.6% from distance and nearly 75% from the free throw line, but opponents have been lighting up the scoreboard.

Marquette does have wins over Wisconsin and Creighton, but also losses to Oklahoma State, UCLA, Seton Hall, and Xavier. In the most recent loss to a Xavier team that was on a COVID pause, Marquette allowed a season-worst 1.324 points per possession. Over the last three games, opponents are 36-of-77 from 3. That is a major departure from early in the season when opponents started 36-of-136 over the first six games.

Villanova has canned over 37% of its three-point attempts, so Marquette better figure out how to defend the perimeter in a hurry. Marquette is also 299th in the nation in TO% on defense. Because Villanova already doesn’t turn the ball over a lot, this shortcoming for Marquette probably won’t be as big of a deal as it could be. Against teams that don’t take care of the basketball, Marquette’s inability to prey on that could be detrimental. Here, they weren’t going to force many turnovers anyway.

It is clear that Marquette is looking for somebody to take over. Woj has toyed with the rotations and freshman Dawson Garcia has actually taken the most shots on the team. Sophomore point guard DJ Carton has the highest usage of any Marquette player and he’s played well, but he transferred in from Ohio State, where he played sparingly last season.

The scary thing about growing lines like this is that Villanova should dictate the pace of the game, which means it will likely be played to around 65 or 66 possessions in regulation. The higher the line, the more efficiency required on both ends of the floor for Villanova to cover.

Still, with Marquette’s recent defensive lapses from deep, it seems like Villanova has the better shot of covering. Marquette’s defensive efficiency numbers look better because of how they started against Arkansas Pine Bluff, Eastern Illinois, and Oklahoma State. They’re not playing nearly as well over their last six games, in which they’ve allowed at least 1.02 PPP in all of them.