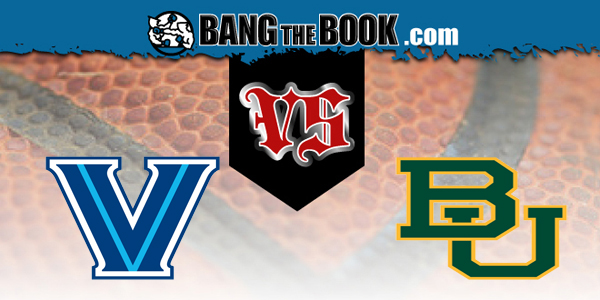 Mad scientist Jay Wright navigated the first two rounds of the NCAA Tournament with relative ease. Even though his Villanova Wildcats were picked against a lot with one of those trendy 12 over 5 upsets, Villanova took care of business against Winthrop and then beat #13 North Texas in decisive fashion.

The task at hand gets much, much harder here in the Sweet 16 with the top-seeded Baylor Bears in South Region action. Baylor struggled for a bit with Hartford, but eventually pulled away and then had little resistance from Wisconsin en route to this Saturday March 27 matchup with Villanova.

Bettors prefer Baylor, at least according to what we’ve seen so far. The Bears are up to -7.5 with a total of 142 at Bookmaker Sportsbook. Some heavy action has hit the board on both the favorite and the over for Saturday’s 5:15 p.m. ET tip.

The loss of Collin Gillespie has not really come into play for Villanova just yet. The level of competition has played a role, but the play of Jeremiah Robinson-Earl has played a bigger role. The special sophomore has 40 points in 74 minutes over two tournament games and led four Wildcats in double figures in the win over North Texas.

Through three postseason games without Gillespie, nothing looks all that different. Villanova is 32-of-85 from three and 46-of-78 on two-point shots. The Wildcats have scored 1.124, 1.129, and 1.424 points per possession. This has been an offense-first team all season long and the offense looks quite good in the postseason. Villanova did lose to Georgetown in the Big East Tournament, but Georgetown was 23-of-23 at the free throw line in that one-point win.

Money has come in on Baylor, but even Bears backers would acknowledge that Villanova’s low TO% on offense is a concern here. Villanova leads the nation in TO% at 13.2% per Bart Torvik. Baylor in third in the nation in TO% on defense at 24.7%. The reason why it is particularly concerning for Baylor backers is that the Bears defense has not looked the same since the team’s COVID pause from February 2-23.

Villanova’s best hope here is to win with offense because the defense is not good. While the defense has played better of late, Villanova is outside the top 200 in both 2P% and 3P% defense. Villanova’s Block% is 330th in the nation. They don’t have rim protectors and don’t guard the perimeter very well.

Has Baylor recommitted to defense? Against a solid Wisconsin team, Baylor allowed .982 PPP, which was their best mark since blowing out a terrible Kansas State team on January 27. If Scott Drew’s team is ready to defend again, the Bears go from being a vulnerable #1 seed to a team that has no excuse for not making the Final Four as the champion of the South Region.

We know that Baylor’s offense is good. Really good. The Bears lead the nation in 3P%. They are shooting 53.5% on two-point shots. They’ve taken good care of the basketball and are one of the nation’s top offensive rebounding teams. It’s all about that recommitment to playing defense because the points will come. Baylor has too many good, experienced shooters that can get their own shots or find open teammates for clean looks.

Recent form means more than a program’s history, but it is worth noting that Baylor has had some great teams in the past and has bowed out of the NCAA Tournament prematurely. This is Baylor’s first #1 seed under Scott Drew, but the Bears haven’t made it past the Sweet 16 since 2012. They were a #3 seed in 2017 and made it to the Sweet Sixteen before losing by 20 to South Carolina as a favorite.

The underwhelming past in this type of game hasn’t done much to stem the tide of Baylor money for this game, but it is something that will surely be brought up as the games get closer and every network talks at length about the Baylor program and it’s past shortcomings.

Bettors are playing Baylor and the over like those are free money giveaways. They could very well be. I did like Baylor in this game at 6 or 6.5, but now that we’re up to 7.5, it is a more difficult sell. The total has also shot up three points from opening 139.5. Both moves seem correct to me, but do we want to get involved now at those numbers?

I’ll flip the script a little bit. While I do like Baylor for the full game, I think Villanova +4 first half is a decent look. The Wildcats have the better coach in Wright. I do think Baylor ultimately wins and covers, but a slow start wouldn’t surprise me at all.