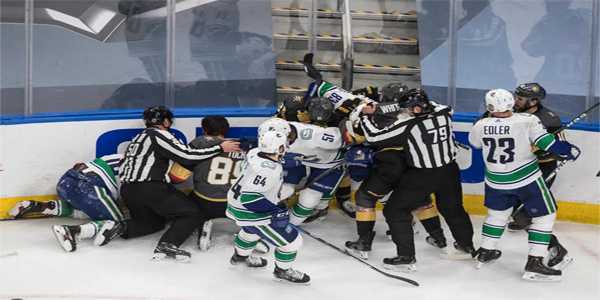 The Vancouver Canucks made a concerted decision before Game 2. They weren’t going to wait for Vegas to come to them. They were going to flip the script and turn the Golden Knights’ game right back at them. Well, it worked. Tyler Toffoli scored 89 seconds into the game and the Canucks rolled to a 5-2 victory to even up the series at 1-1.

We’ve seen an adjustment to the Game 3 total with a 6 painted across the market. We haven’t really seen that big of an adjustment to the line, as the Golden Knights are still -190 to take a 2-1 series lead at BetDSI Sportsbook. The Canucks are +160 to pull off what some would consider to be another stunner.

Let’s start with some narratives. The first narrative is that Game 2 will be a good thing for the Golden Knights. It will humble the team thought to be the best in the Western Conference right now. Some will say that being brought down a few pegs is a good thing, especially after a pretty resounding 5-0 win in Game 1.

Or did it? Was it just a bad night for Robin Lehner and the Golden Knights defense? High-danger chances were tied 9-9. Vegas held a 31-18 advantage in scoring chances at 5-v-5. They still had more expected goals for than the Canucks, but lost 3-1 in 5-v-5 scoring.

The Canucks got what they needed from their stars. Elias Pettersson had three points, including a tone-setting assist on Tyler Toffoli’s goal. Bo Horvat scored. Petersson scored a huge goal late in the second to give Vancouver back their two-goal lead.

Vancouver scored all five goals right in front of the net. Vegas got their two goals from above the faceoff circles. That was really the difference in the game. Jacob Markstrom made saves in high-traffic areas and Lehner did not. It wasn’t all Lehner’s fault. The Golden Knights defense corps didn’t play well by any means.  They didn’t clear the front of the net. They got outworked around the crease. Vancouver played a speed game to enter the zone and a gritty game inside of it.

So, how does Vegas adjust? I think the first step is not overreacting. Vancouver was limited in the scoring chance department and in the shot department. Really, Vegas had a bad first period. They didn’t come ready to play. They allowed four high-danger chances at 5-v-5 and gave Vancouver life early on. Markstrom made it stand up. It wasn’t a good effort on the scoresheet and Vegas eased off the gas pedal in the third period when the game was mostly in hand, but that second period was Vegas’s huge response push and they did play well.

Vegas will be ready to play a motivated first 20 minutes. The first period over might actually be the best play on this game, but since the article is going up the day before, we don’t have those odds just yet. Vegas will respond. Lehner should respond. Peter DeBoer is a solid head coach and he made the right second period moves, Vegas just couldn’t get that game-tying goal and then went into the room down 3-1 with the backbreaker late in the period.

Puck lines aren’t easy to take, but Vegas really did a better job of limiting scoring chances than the final score would indicate. They had a lot of quality chances in front, but Markstrom was equal to the task. We’ll put the shoe on the other foot for Game 3 and take Vegas on the puck line.

TAKE VEGAS ON THE PUCK LINE AT BETDSI IN GAME 3!