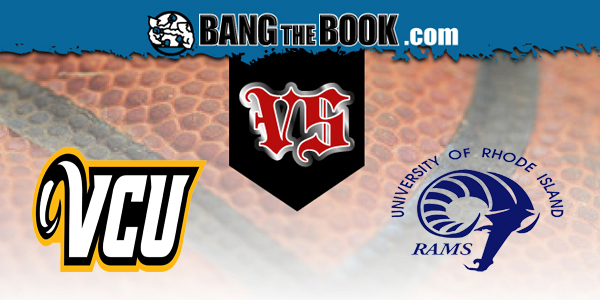 We got back in the win column on Tuesday to keep up a nice 7-2 run with the spotlight college basketball games at BangTheBook. I’m not sure this pace will keep up, but it’s been nice to be seeing them well plucking one game per day. Hopefully you’ve been able to hit these, but also have been able to use some of the analysis and the numbers from the resources to add more winners to your card.

It’s important to talk about the process and some of the stats that go into a handicap. When you move on to look at other games, you can apply those concepts and some of that statistical analysis to isolate other games that make sense.

For Wednesday, we’ve got a pretty big hoops board with only a couple of cancellations and only one afternoon start. Our focus will be in the Atlantic-10 for the matchup between VCU and Rhode Island. Money has hit the road Rams, who are -1 with a total of 137.5 at MyBookie Sportsbook against the home Rams. That means that VCU has flipped into a favorite for this A-10 headliner between two quality teams.

Virginia Commonwealth lost the first game to Rhode Island by an 83-68 score back on Saturday January 9. It was a rare poor performance for the VCU defense, which allowed 1.087 points per possession. That still stand s as the worst defensive output to date. Defense is the hallmark for Mike Rhoades’s team. The Rams rank fifth in adjusted defensive efficiency per Bart Torvik and 16th in eFG% defense.

So, we’ve chalked up the first game as an outlier. A performance unlikely to be repeated by either side. Evidently the betting market has done the same thing with VCU now favored after opening a slight underdog. It is a pretty big overreaction and adjustment to the line after VCU was -6 at home for the first game.

Maybe VCU hasn’t played its best basketball since that game, but it still seems like a pretty big overreaction. The Rams lost by 16 at Saint Bonaventure in what was their worst offensive performance of the season on January 20. Otherwise, they blew out Dayton and beat La Salle by double digits along with a seven-point win over George Washington. Nothing that would warrant a huge overcorrection to the line.

CLAIM YOUR WELCOME BONUS + A FREE FUTURES BET AT MYBOOKIE

Rhode Island is just 6-5 in A-10 play thus far. The URI Rams are coming off of an ugly loss to Dayton on the road last weekend in a game where they scored just 56 points. Offense has been a little tough to come by for Rhode Island recently. Senior Fatts Russell has a very high usage rate again this season while being an inefficient offensive player. He’s shooting 37.7% on twos and 25% on threes. He’s also taken far and away the most shots of any player on the team. Basically, Rhode Island is okay when he has a decent game, but when he plays to his season level, they’ve been poor on offense.

When Russell scores at least 15 points, Rhode Island is 6-2. When he doesn’t, the Rams are just 2-7. He missed the win against Fordham. He had 23 against VCU in the first meeting, but 13 of the 23 points came at the free throw line. Another way in which that game was an outlier is that there were 54 free throw attempts accounting for 42 points.

Rhode Island is a pretty poor offensive team. They turn the ball over too much and aren’t overly efficient on offense, largely because of Russell’s insistence on shooting too much. The Rams are, however, a quality defensive squad for David Cox. The Rams are 42nd in adjusted defensive efficiency and 42nd in eFG% defense. They held VCU to .891 points per possession in the first meeting.

There is something very important to point out here. Rhode Island has played five straight games below 70 possessions. VCU is a faster team, but they’ve played three straight below that number against slower teams. URI’s pace has fallen off a bit, possibly because of their limited offensive upside.

There are two plays I like in this game. The first is VCU. I agree with the line move from +1 to -1. I also like under 137.5. The first game was propped up by a lot of free throws and played to a much higher pace than either team usually plays at.

This is NOT a parlay. Just two plays I like from the same game.