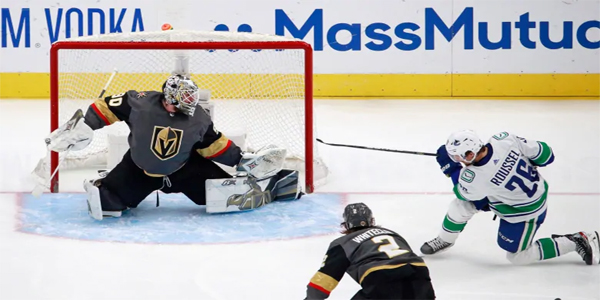 That was not the start that the Vancouver Canucks wanted in Game 1 against the Vegas Golden Knights. Vancouver lost 5-0, as Jacob Markstrom and the Canucks defensive corps looked overwhelmed by the Golden Knights.

They’ll try to figure some things out and try to play a different kind of game on Tuesday night, but the odds suggest that it could very well be more of the same. Vegas is a -210 favorite and +120 on the -1.5 puck line at BetDSI Sportsbook as they look to take a 2-0 series lead. The total is 5.5 with some juice on the over.

Let’s try and fill the glass halfway for the Canucks. Vancouver had 27 scoring chances in Game 1. That was only one fewer than Vegas. They also scored zero goals on their scoring chances, so it seems pretty hard to fill the glass more than just a sip. The Golden Knights had 11 high-danger chances to six for the Canucks. Vegas outscored Vancouver 4-0 at 5-v-5 and added a power play goal for good measure.

Markstrom was pulled with 8:26 left in the game and Thatcher Demko made five saves in relief. It was the first really poor game for Markstrom in these playoffs, but it certainly wasn’t all his fault. Vegas just comes in waves. They are deep, talented, and excellent in transition. This is a much different style of game than the one that the Canucks just played against the St. Louis Blues.

St. Louis is a great team, but their lack of scoring opportunities and their shoddy goaltending early from Jordan Binnington gave the upstart Canucks a chance. It gave them an opening into the series. Lower-scoring environments often help upset bids because a key bounce here or a key bounce there can change the outcome of a series.

With Vegas, the Canucks are going to need a lot of key bounces. Vancouver was just overwhelmed in Game 1. It does seem like Travis Green realizes that his team’s only hope is to probably play a speed game with Vegas and hope that they can get Markstrom’s best. That’s why the Canucks did have some scoring chances. Unfortunately for them, Robin Lehner snuffed out all of them with the 26-save shutout.

Lehner’s performance seemed to come at an apropos time. Marc-Andre Fleury’s agent Allan Walsh let his frustrations get the best of him on Twitter over the weekend with an image that he probably regrets posting. Fleury was forced to clear the air. The fact of the matter is that Lehner gives the team a better chance to win than Fleury. Fleury was not good during the regular season and Lehner was acquired to start.

Lehner was exceptional last season for the Islanders and carried it over to this season with the Blackhawks and Golden Knights. If this series keeps trending this way, Fleury might get a game, but the team has made the right choice going with Lehner and his shutout just seemed like a cherry on top.

It seems too easy to say Vegas wins and to lay the -210 price. Will Vegas cover the puck line at +120? That certainly seems possible. Right now, they look like the best team in the Western Conference and that crash course with Colorado in the conference finals will be one of the most anticipated series in a while.

I like the over in Game 2. Green said after the game that the Canucks didn’t take care of the puck and didn’t realize the speed that Vegas had. I think Vancouver is going to want to exit the zone as quickly as possible and try to create some transition offense. I think Game 2 will be a pretty wide open affair. That’s why I’m looking over 5.5 with a little juice.

BET ON GOALS IN GAME 2 BETWEEN VANCOUVER & VEGAS!