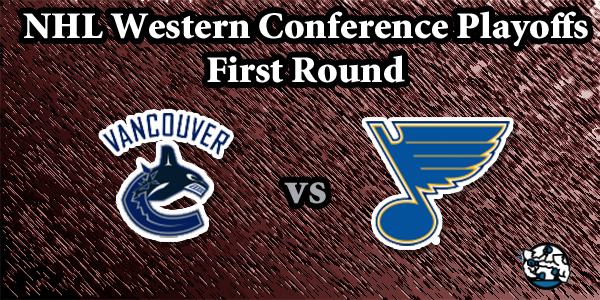 The Boston Bruins have been used as the poster children for not caring about the Round Robin games, but the St. Louis Blues sure didn’t care a whole lot either. The reigning Stanley Cup champions scored six goals and lost all three games in their return to play matchups.

They draw a Vancouver Canucks squad that disposed of what some people felt was a highly underrated Minnesota Wild bunch. The Blues will have to flip the switch. Last year, they played as well as anybody over the last four months of the regular season going worst to first. We’ll see if they can do it again after that Round Robin showing.

The Blues draw three late games with the four that are scheduled. Time is a meaningless construct in the bubble, but it is still pretty interesting. It is also a bummer for those in St. Louis that want to watch the games, but they’ll simply have to make due. The Game 3/Game 4 back-to-back could be a pretty interesting spot and likely advantageous to the Blues, who are the deeper team.

Jacob Markstrom is the key to this series for Vancouver. Markstrom was solid during the regular season with a 2.75 GAA, a .918 SV%, and an 11.40 goals saved above average mark. Backup Thatcher Demko was nowhere close to those numbers. It took a while for Markstrom to have a true breakout season, but he had one this year and was on the verge of it last season over his 60 games.

Markstrom stopped 112 of 121 shots in the Qualifying Round and that was good enough to help Vancouver advance. The Canucks were not the better team in the series. Minnesota had 11 more scoring chances and 30 of them were high-danger chances. Vancouver did have a higher percentage of quality looks, but they advanced because they had the highest high-danger save percentage in the first round. They narrowly edged out Columbus, who also advanced.

With Markstrom’s quality play and some iffy goaltending from Alex Stalock, Vancouver outscored Minnesota 8-3 at 5-v-5. That represented a pretty big departure from the regular season, when Vancouver was outscored by three goals at 5-v-5. The Canucks were just an average team during the regular season. Markstrom was just good enough to lift them to playoff contention.

The Canucks also relied on the fourth-best power play unit in the league. Unfortunately for them, St. Louis was one spot better in third.

Boy, the Blues just went through the motions in the Round Robin. They didn’t even play everybody in all three games. It sure looked like they had no desire to be in those games, but at least they served to shake off the rust. The Blues were so deficient of scoring chances in those games that their expected goals for in the three games was the lowest of any team in action. That being said, as bad as they were offensively, they were quite stout defensively.

The Blues were +30 in 5-v-5 scoring in the regular season with 149 scored and 119 against. They did allow 580 high-danger scoring chances while only generating 549. Offensive opportunities were not omnipresent for the Blues by any means. The goaltending was, though. They led the league in high-danger save percentage by nearly 2.5 over the Dallas Stars.

Jordan Binnington was such a huge part of St. Louis’s Stanley Cup run last season and actually got outplayed by Jake Allen this year. Binnington had a .912 SV% and a 2.56 GAA with a 3.31 GSAA. Allen only appeared in 24 games, but had a .927 SV% and a 2.15 GAA. He posted an 11.23 GSAA. There is no doubt that Binnington will start the playoffs for the Blues. He wasn’t bad in the regular season, he just wasn’t as good as Allen, though Binnington played a lot more games.

Binnington struggled badly in the Round Robin with eight goals allowed on 76 shots. Allen, meanwhile, stopped 37 of 38 shots. It will be interesting to see if Craig Berube has to make that tough call at any point.

Jacob Markstrom is going to make this series interesting, especially if we get this subpar version of Jordan Binnington. The Blues are the better team with better depth and what would seem to be a lot better structure. They only scored six goals in three Round Robin games, though, so this will hardly be a walk in the park for them. Vladimir Tarasenko is shaking off some rust and other players are looking to get going again.

An upset would not be a shocker here, but I have to think St. Louis gets the ball rolling after a few games with some more incentive and initiative.

BACK THE BLUES AT BETONLINE SPORTSBOOK