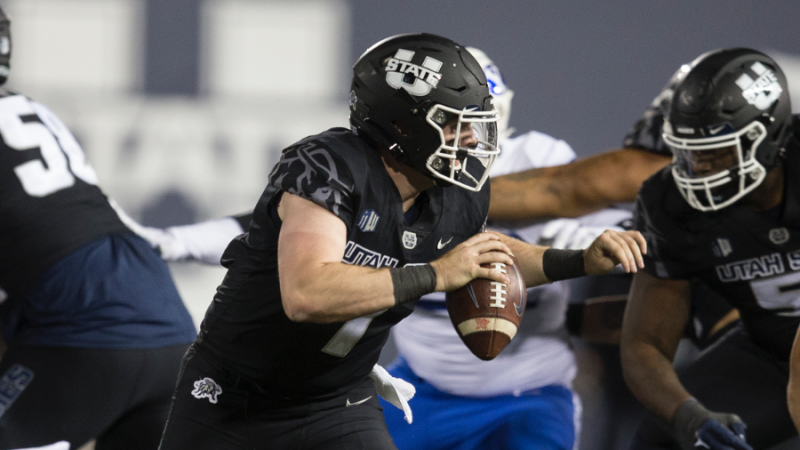 Another frenzy Saturday college football is upon us, so we bring you the best Utah State vs. UNLV betting picks and odds, as the Aggies head to Allegiant Stadium in Las Vegas to meet the Rebels for the first time since 2018.

Utah State is undefeated in five consecutive encounters with UNLV, going 3-2 ATS in the process. The Aggies are listed as 5.5-point road favorites for Saturday’s Week 7 clash, while the totals sit at 60.0 points on BetOnline Sportsbook.

Can the Aggies stop a two-game slide?

The Utah State Aggies (3-2; 3-2 ATS) started the 2021 CFB season with three straight victories, including a couple of road upsets at Washington State and Air Force. They are coming off a bye, and in their previous two showings, the Aggies have suffered a 27-3 loss to Boise State and a 34-20 defeat to No. 13 BYU.

Utah State battled bravely against the Cougars in Week 5 but couldn’t deal with their ground game, allowing 6.1 yards per carry. On the other side, the Aggies racked up only 31 yards on 35 totes, while Logan Bonner threw for 276 yards, two touchdowns, and an interception.

The Rebels are winless in 11 straight outings

The UNLV Rebels (0-5; 3-1-1 ATS) had two weeks to rest and prepare for their Week 7 matchup with Utah State. They hope to finally put an end to their awful losing streak. The Aggies are winless in 11 games in a row, though they met three ranked teams through the first five weeks of the 2021 season.

At least, the Aggies have covered the spread in three of their previous four outings. After a 38-30 defeat as 30-point dogs at Fresno State in Week 4, the Aggies lost as 21.5-point underdogs at UTSA in Week 5, 24-17.

Sophomore QB Doug Brumfield is struggling with an injury and had to miss a couple of games in 2021. He’s questionable for Saturday’s clash against the Aggies, so freshman Cameron Friel could get the second straight starting call. Back in Week 5, Friel tossed for 307 yards, a TD, and two interceptions in that seven-point defeat at the Roadrunners.

The Rebels are scoring 18.6 points per game on just 282.4 total yards (127th in the country). If their freshman quarterback gets another nod, the Rebels will lean on their passing offense and should have a lot of opportunities against this Utah State’s defense.

However, the Rebels struggle on the defensive side of the ball, allowing 302.8 passing yards per contest (124th). The Aggies love to throw the ball around, so I’m expecting the visitors to escape with a win and, hopefully, cover a 5.5-point spread.

These are two bad defensive teams, so I think betting on the over is a way to go. Both sides should move the ball easily. As I’ve already mentioned, they have huge problems making stops, especially in the secondary.

The Rebels have allowed 35-plus points in four of their first five games in 2021. On the other side, the Aggies’ offense will look to get back on the right track after a couple of tough matchups with BYU and Boise State. The over is 5-1 in Utah State’s previous six games played in Week 7.