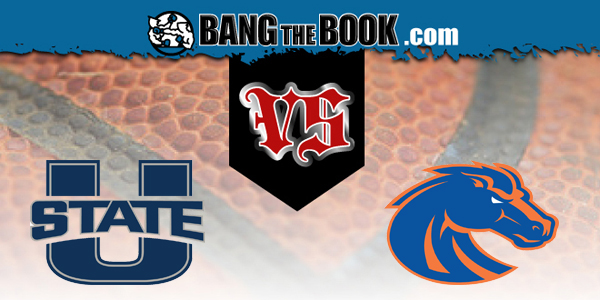 The Boise State Broncos are fighting an uphill battle in an attempt to gain eventual entry into the NCAA Tournament. It’s going to be difficult, as they were swept by Nevada, which is one of the other Mountain West teams looking for at-large consideration.

The Utah State Aggies are in a similar boat, as they started slow, with three losses in their first four games and then sustained two upset defeats in conference play.

These teams will meet up in an MWC game that is scheduled to begin at 9 PM ET at the ExtraMile Arena in Boise. Remember that if you are a BetAnySports customer, you can get reduced juice, which will afford you better odds, as well as Sports Betting Prime, which actually allows you to place wagers during the game itself.

Utah State is 14-5, and has lost only to Colorado State in conference play. Boise State is 16-4 overall and 12-3 in the conference. We’re not sure how the NCAA selection committee is going to deal with the Mountain West when it comes to at-large bids for the Big Dance, but the MWC is ranked tenth among all leagues in a measurement from KenPom. And consider that San Diego State is ranked #25 in the AP basketball poll. If the Aztecs don’t win the season-ending conference tournament, they will likely be the ones taking the at-large bid.

One of the big battles in this game will be on the boards, particularly when Utah State has the ball. That’s because the Aggies are 16th in the nation in offensive rebounding percentage, while the Broncos are 11th when it comes to defensive rebounding.

Here are the college basketball betting odds on this game, as they are posted by the folks at BetAnySports:

The other thing that is going to be a factor here is whether the Broncos are able to hit their shots from three-point range. That is because we see an impediment here coming from Utah State. That impediment is known as Neemias Queta, who has to be considered one of the top inside defenders in the country, and perhaps one of the best centers overall.

A native of Portugal, born to parents from Guinea, Queta played for the Portuguese Under-20 team and spurned a couple of other scholarship offers to sign with the Aggies. he has become a defensive anchor, blocking three shots per game. And he has that quality of altering things for the opposition.

Utah State makes it incredibly hard to score inside the three-point arc, which generally amounts to points in the lane. They have given up just 42.2% shooting, and only three teams – Michigan, Saint Peter’s and Cal-Riverside – have been stingier. Also, only Davidson and North Dakota State have pulled down a higher percentage of defensive rebounds. And since the Aggies are 16th nationally on the offensive glass, it can be reasonably concluded that they are probably among the elite rebounding teams in the nation.

So if Boise State has to revert to shooting long-range, how good are they at doing that? Well, they have hit 35.2%, which is not horrible, but places them outside of the nation’s top 100. Basically, they are going to need to be hot, because they aren’t getting too many second-shot opportunities.

And if all that is the case, we’d have to afford Utah State, a team that has won four out of five as the visitor, an edge grabbing the point and a half.

Come and follow BetAnySports all the way to the Final Four. March Madness gets a lot more palatable when you have reduced juice to give you better odds on each game….. And even after you make your pre-game wager, you can keep going while the contest is in progress with Sports Betting Prime….. Remember that Bitcoin is available for all transactions, and it does not carry a transaction fee , so there are no impediments to you climbing aboard right now!