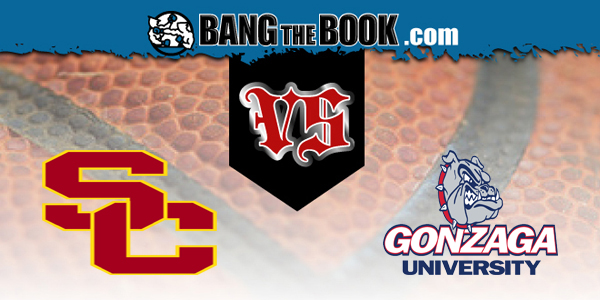 We had one close game on Saturday and one close game on Sunday in the Elite Eight. As much as any tournament is better than no tournament, like what we had to deal with last year, this year’s NCAA Tournament has lacked thrilling finishes and quality games. That may be the case again on March 30 when USC takes on Gonzaga in the first of two Elite Eight games on the second-to-last day of the month of Madness.

Gonzaga is -9 with a total of 155 per our friends at MyBookie Sportsbook. The Pac-12 has three teams in the Elite Eight and the Trojans got there by beating a fellow Pac-12 foe in Oregon. Gonzaga has not faced a Pac-12 team yet, so we’ll all collectively hold our breaths and see if this is where the run ends for the Bulldogs against apparently the best conference in college basketball.

USC is dangerous. We knew that throughout the season. Their #6 seed was probably befitting of their body of work, particular with just a 4-3 record over their last seven games, but the Trojans have a lot of balance. They have two key bigs in the Mobley brothers, a senior guard that facilitates the offense, and wing players that can score and play defense.

They also have a coach in Andy Enfield who is one of the best in the business in this tournament and he has showcased it again this year. USC has won each of its three games in the NCAA Tournament by at least 14 points. The Trojans barely broke a sweat against Drake or Kansas before pummeling Oregon into submission.

Like all the other Pac-12 teams that have gone on runs, USC has picked the right time to heat up from three. The Trojans are 27-of-47 in this tournament from beyond the arc and went 10-of-17 in the 14-point win over Oregon on Tuesday. Efficient offensive performances are always key in March and it makes a team like USC that much harder to beat.

This is a good offensive team. The efficiency metrics are solid. USC is also in the top 75 now in both 2P% and 3P% nationally. The Trojans are still awful at the free throw line at 64.6%, but haven’t been forced into a close game that requires a good performance at the stripe. The Trojans also boast a strong offensive rebounding game that has helped along the way.

The offensive explosion makes USC that much stronger because this has been an excellent defensive team throughout the season. The #1 2P% offense in the country faces the #1 2P% defense in the nation in this one. Opponents are only shooting 41.5% on twos against USC. USC’s defense is top 10 in adjusted defensive efficiency and eFG% against. Opponents have found that out firsthand in the NCAA Tournament so far with 56, 51, and 68 points.

If Enfield’s club can hold Gonzaga under 70 points, it might have to go down as the best defensive performance of all-time. Gonzaga’s lowest output on the season is 73. They also have a game with 76 and one with 78. The Bulldogs have scored at least 80 points in every other game, have scored 90 or more on 15 separate occasions, and have not been stopped much in this tournament.

The Bulldogs have not played a close game either. Their smallest margin of victory thus far is 16 points against Oklahoma, though it did take a late-game flagrant foul and some other whistles to get them there. Creighton never really put up much of a fight on Sunday in Gonzaga’s 83-65 win.

Gonzaga hasn’t seen many teams with USC’s defense, if any. Even Virginia has fallen off the pace a little bit in that regard this season. We’ll see if the Trojans can provide more resistance against a team shooting 64% on twos and 37.2% on threes. The Bulldogs lead the nation in adjusted offensive efficiency and eFG%.

We could end up with something of a pace war here and the onus will be on USC to slow Gonzaga down. Though the Trojans have a good offense, they don’t want to get into an up-and-down battle with Gonzaga. The Bulldogs are sixth in the nation per Bart Torvik in adjusted tempo. USC is 231st. Mark Few may want to play at a heightened pace to force the Mobley brothers to move up and down the floor with some urgency. Tiring those big men out would certainly help the cause.

Recency bias plays a role, along with how dominant USC has been in the three games in Indianapolis thus far, but the Trojans appear to be the best team that Gonzaga has faced this season. They are the highest-ranked team per Torvik and also Ken Pomeroy. Gonzaga, though, is far and away the best team in the country. Many have Gonzaga at least a seven-point favorite over Baylor on a neutral, the consensus #2 team in college basketball.

The NCAA Tournament shifts now to Lucas Oil Stadium exclusively for the Elite Eight, Final Four, and Championship Game. It will be a much different shooting backdrop. In that respect, a total in the mid-150s does seem a little bit lofty for this game and would for every game going forward because of the high stakes.

Gonzaga does get to the tin a lot more than USC. The Bulldogs are also a much better free throw shooting team. Those two things could play a major factor in how this game plays out.

I have to lean with USC here, though. Enfield has proven to be an excellent tournament coach and his team is clearly going in the right direction right now. USC has not played a top-30 team per Torvik on the way here, as Kansas was down and Oregon was something of a tough team to figure out. Gonzaga, though, hasn’t seen a defense or a team this balanced or athletic pretty much all season long. I think USC can keep it fairly close.

NCAA Tournament Picks — Who wins the matchup battle between Arkansas and Baylor?