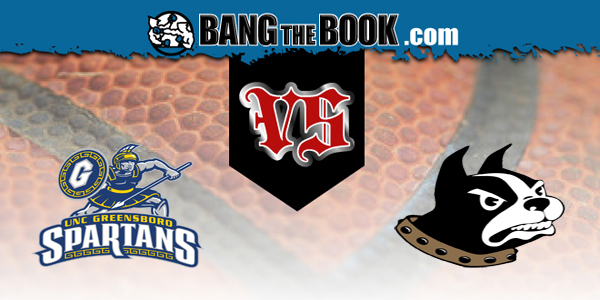 Some really big games are on the college basketball betting board for Wednesday January 6. It’s usually hard to pick a game to hone in on, but we love to try and support the mid-majors here at BangTheBook, so that’s what we’ll do with this spotlight preview.

That game is UNC Greensboro on the road at Wofford. There is some bad blood in this rivalry and these are two teams that go about their business in very different ways. Wofford is -2 with a total of 139 at BetOnline Sportsbook in this SoCon battle of powerhouse teams. This is a game that could have some big implications down the line in terms of conference tournament seeding.

Let’s take a look at this matchup and find a play for the game.

A lot of teams feel pretty spiteful about how the 2019-20 college basketball season finished, but UNC Greensboro’s season was over several days before COVID-19 had a say. The Spartans lost three straight games to end the year, including a 10-point loss to underdog Chattanooga in the SoCon Tournament.

Over the course of the season, Greensboro and Wofford, who did not reach the same heights that the Terriers did in 2018 when they were under serious consideration for an at-large berth in the NCAA Tournament, played two highly competitive games. Wofford won 98-92 in double overtime and Greensboro returned the favor in overtime with an 83-79 win.

The 2021 version of the Spartans have not yet shown the same offensive upside as recent teams. Despite the best commit of Wes Miller’s era in Jarrett Hensley, the Spartans only rank 299th in eFG% on offense. They are only shooting 26.3% from distance and that is a big reason why the team is off to a 5-4 start and a 0-1 record in conference games.

Hensley has barely played and didn’t even see the floor against East Tennessee State in the conference lid lifter last weekend. The Spartans are still doing well on the offensive glass, but haven’t converted those chances into points or free throw attempts often enough. Defensively, Greensboro has played very well, but they also rank 334th in free throw rate against.

The defensive numbers have also been propped up by playing really well against some bad offensive teams. Against the better team they’ve played, the Spartans have performed below their season averages, including 1.06 points per possession allowed to ETSU last game.

There are red flags all over Wofford’s profile as well. Imagine a team sitting at 5-3 that is shooting 37.6% from 3 and 58.3% from 2. They are top-50 in 3P% and top-20 in 2P% and yet they’ve gone 3-3 against Division I competition. Defensively, Wofford has been a mess against D-I opposition. Richmond, Coastal Carolina, Texas A&M, and Samford all scored at least 1.11 PPP. Fortunately, because of Wofford’s offensive prowess, the Terriers have been able to win a few of those games.

Somehow Wofford, a team that is shooting 46% overall from the floor, is just 56-of-96 from the free throw line. Senior leader Storm Murphy is 22-of-26, so the rest of the team is just 34-of-70. Wofford’s offensive style is predicated on shooting threes. Their 58.6% 3P Rate is the highest mark in the country, meaning that almost three-fifths of their shots are three-point attempts.

This is the second season under Jay McAuley. Mike Young moved to Virginia Tech after Wofford’s 30-win season in 2019 and he’s off to a fine start with the Hokies. McAuley, who did start his tenure without seniors Fletcher Magee and Cameron Jackson from the best Wofford team in program history, carried forward the program’s offensive style of shooting a lot of threes.

The Terriers play at a slow tempo and this looks like a game that will be played at a pretty slow rate around 66 or 67 possessions. Last season’s games required overtime, but were still only played to 86 possessions in 2OT and 76 possessions in 1OT, with the fouling that comes with close games at the end.

So we have two really different teams. Wofford chucks a ton of 3s and has success with them. Greensboro shoots a pretty high number of triples, but does not shoot them well. UNCG is a much stouter defensive team, but they do foul a lot. The question is whether or not Wofford can make those free throw attempts.

In looking at this game, it is a tricky handicap because most of what UNCG does well, Wofford does not, and vice versa. Wofford is the team with the higher ceiling. Winning with defense in the SoCon is tricky. It is an offensive league tailored towards teams that can shoot. For now, the team that is better in those two areas is Wofford.