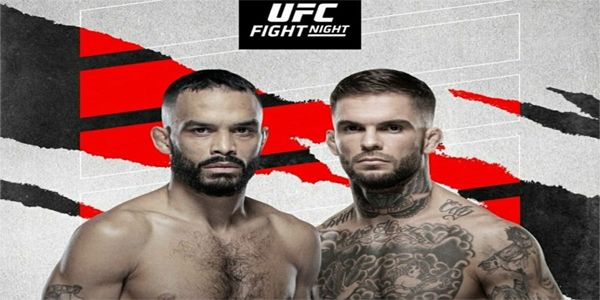 Even though we’re seeing more and more capacity restrictions lifted, the next several UFC Fight Night events will be held at the UFC Apex. That means limited attendance in the smaller space and really just a who’s who crowd of family, friends, and special guests.

This is a solid fight card with a main event in the bantamweight division between Rob Font and Cody Garbrandt. That will be the headliner of the UFC Vegas 27 card and the culmination of 12 fights scheduled for the event.

We’ll use odds from BetOnline Sportsbook to see which bets look the best for Saturday night’s action.

Rafael Alves is really being thrown to the wolves here in his first fight under contract. The Dana Whit Contender Series graduate is in a nice groove with five wins in a row, but this is a gargantuan step up in class. Former M-1 Champion Damir Ismagulov is 3-0 in UFC, but is fighting for the first time in nearly 21 months. He’s still 22-1 in his career, which includes three decision wins in the UFC. There’s no betting value in this fight, as the heavy favorite should win.

Money has hit the board on Damir Hadzovic in this lightweight fight against Yancy Medeiros. Mederios has lost three straight fights, including his most recent decision loss to Lando Vannata 15 months ago. Hadzovic has also lost two in a row, including a first-round submission loss 14 months ago. I’m not sure how either fighter is worthy of your money with the recent performances and the long layoffs, but the market likes Hadzovic, so that’s what you need to know.

Listed at BetOnline as Yilan Sha, which is a lot easier than Nuerdanbieke Shayilan, this will be the UFC debut for the Chinese featherweight. He is 19-6 in his career with four wins in his last five fights. Sha has actually fought five times since May 22, 2020, so he’s been quite active. This is obviously a huge step up in class to fight in UFC after fighting in Jue Cheng King and WLF previously.

Josh Culibao was 0-1-1 last year in fights against Jalin Turner and Charles Jourdain. He went into the UFC at 8-0, but has not found much success. He’s expected to find it here. I’d say the under 2.5 is a good bet here. Culibao has four decisions in 10 career fights. Sha has six in 25 fights, but only one recently.

Another big favorite here as Bruno Silva and Victor Rodriguez meet at flyweight. Silva snapped a three-fight winless streak with a complete performance against JP Buys back in March. It was a much-needed win for the 31-year-old, who seems poised for another given the line. Rodriguez was beaten badly by Adrian Yanez back in October in his UFC debut. A similar fate seems to be coming his way here based on the line. All 10 of his fights have ended in a stoppage, so the under 2.5 is priced properly with the -165 juice.

You know this is a line move of significance when Court McGee takes money. McGee has lost four of his last five fights. Claudio Silva only has two losses to his name, one in his most recent fight against James Krause back in October. That fight ended a 14-month layoff for Silva, so maybe he was just a bit rusty.

McGee’s last seven fights have gone the distance, with losses in five of them. I’m not sure I understand this line move here. It’s pretty telling to see one on McGee with seemingly no reason for it. Still, I can’t help but think the market is overthinking itself here. I like Silva now that he’s at plus money.

UFC newcomer Chris Barnett is a rather interesting heavyweight, as he only stands 5-foot-9, making him one of the shortest guys in the division. He’s 21-6 with 16 KO victories to his name going into this fight with a veteran in Ben Rothwell. This fight has changed four times, as Rothwell was to face Philipe Lins back in March. Rothwell backed out the first time, Lins the second time, and then Lins backed out again.

Askar Mozharov was going to take the assignment, but had visa issues, so now it’s Barnett. Rothwell should win here, but it is hard to lay $3 with him with losses in three of his last five fights, including a lackluster split-decision win over Ovince Saint Preux. This is not a good fight to bet on.

This fight was originally set for UFC 262, but somebody in Hermansson’s camp tested positive for COVID-19, so the fight was moved.

It looks to be a good fight in the middleweight division between Edmen Shahbazyan and Jack Hermansson. Shahbazyan suffered his first career loss last time out against Derek Brunson and it was pretty ugly. Brunson nearly scored the win before the end of the second round, but did finish it off early in the third round. It was the best opponent to date that Shahbazyan had fought and it looked like it, as he was more than doubled in strikes and Brunson scored four takedowns.

Hermansson is probably the second-best fighter to date that Shahbazyan will have faced. He’s coming off of a 25-minute loss to Marvin Vettori, but it did look like the fight could have been over much earlier than that. He responded well and managed to last the full 25. For Hermansson, it was an inability to get the fight to the ground. If Brunson was able to do it, he should be able to as well. This is his fight to lose.

This fight between Ricardo Ramos and Bill Algeo was set for about a month ago, with Algeo a slightly smaller favorite at that time. Ramos is 2-2 in his last four fights, including a couple of KO losses to Lerone Murphy and Said Nurmagomedov. Bill Algeo has also split his last four fights, but is 1-1 in UFC and 1-2 if we include his Contender Series bout. Algeo beat Spike Carlyle by unanimous decision last time out to bounce back nicely from his loss to Ricardo Lamas two months prior.

It was a very convincing win for Algeo, who outstruck his opponent 118 to 28 and landed more than three times the significant strikes. The question here is the method of victory. Algeo goes to decisions. Three of the last four fights for Ramos have ended via stoppage. The total is juiced over, suggesting Algeo by decision. I have to think his height advantage helps in the smaller Octagon here. This isn’t a strong pick, but Algeo it is.

A couple of 30-year-old featherweights do battle here, as Norma Dumont and Felicia Spencer fight at 145 pounds. This will be Spencer’s first fight in almost a year after getting badly beaten up by Amanda Nunes. Credit to Spencer, who stayed upright and went the full 25 in a fight where she was nearly doubled in strikes and failed on all seven of her takedown attempts.

Spencer has two losses to her name, both by unanimous decision. They’ve been to Nunes and also Cris Cyborg. Not much you can do about that. Norma Dumont is not either of those two fighters. Dumont was 4-0 before joining UFC and promptly lost to Megan Anderson before beating Ashlee Evans-Smith. This is clearly Spencer’s fight to lose.

Jared Vanderaa slides into this matchup against Justin Tafa in the heavyweight division. Vanderaa lost his first fight under contract against Sergey Spivac back in February by second-round KO, but he’ll be back at it here against Tafa, a veteran of three UFC scraps. Tafa has only won one of his three attempts, with a KO loss, a KO win, and then a split-decision last time out in January.

Vanderaa has a big size advantage here, something he did not really have against Spivac. Spivac outlanded Vanderaa by nearly a 4/1 ratio and also had three takedowns. Tafa connected with more strikes than Carlos Felipe last time out, but his output wasn’t high enough to remove all doubt, so he lost by split-decision. In this fight, it will be about which guy is the aggressor. Because I’m not sure, it’s a toss-up fight, but over 1.5 seems to make sense here, as a feeling-out process will likely take place, especially with Vanderaa able to keep the fight at arm’s length with his lower output.

This is an outstanding fight in the women’s strawweight division between Carla Esparza and Yan Xiaonan. Esparza is the slight underdog with four straight wins, likely because one was a majority decision and two were by split decision. Or because Yan Xiaonan is 13-1 and rides a six-fight winning streak into this one.

The knock on Yan would be the quality of competition. She’s beaten Kailin Curran, Viviane Pereira, Syuri Kondo, Angela Hill, Karolina Kowalkiewicz, and Claudia Gadelha, the most recent of which is the best win in that bunch. Esparza has had a tougher road with Marina Rodriguez, Michelle Waterson, Alexa Grasso, and Virna Jandiroba.

In fairness to Yan, she has won all six in unanimous fashion. This will be the best and most accomplished fighter she has faced and the line confirms it. Esparza’s size disadvantage is enough to push me towards Yan, but this is a closely-contested fight throughout and a legitimate toss-up.

The really strong main card makes up for a subpar prelim card at UFC Vegas 27. This should be an excellent main event between Cody Garbrandt and Rob Font. Font won his only 2020 fight with a first-round knockout of Marlon Moraes. It was his third straight win. Garbrandt also won his only 2020 match as he tries to work his way back into the title picture in the bantamweight division.

Garbrandt’s three losses came in succession to TJ Dillashaw twice and Pedro Munhoz. Is Font on the level of those guys? Most would say no. However, Raphael Assuncao, the most recent win for Garbrandt, was a step down below Font and his other recent opponents. I have to think this is another fight that could go either way with some serious knockout power from both guys. Under 2.5 at -130 looks like the best option.