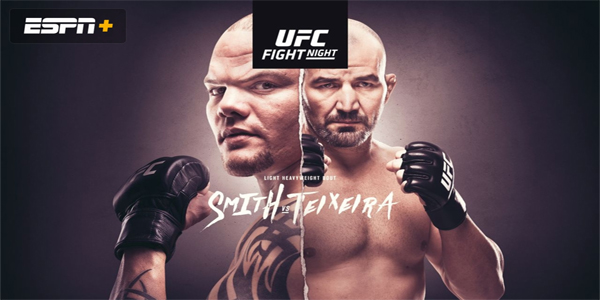 It was great to have live sports to wager on in North America again. This week, we’ll get UFC on ESPN 9 on Wednesday, UFC on ESPN 10 on Saturday, and the Darlington Raceway 400 on Sunday. This is all part of our hopeful return to whatever normal is across the sports world.

It would be wrong to say that UFC 249 went off without a hitch, as Ronaldo “Jacare” Souza and members of his team tested positive for coronavirus and had to be removed from the event, but everything else went extremely well for Dana White and especially well for ESPN, who saw some monster ratings.

We’ll likely see more of the same with UFC on ESPN: Smith vs. Teixeira on Wednesday. The main event features light heavyweights Anthony Smith and Glover Teixeira and the card will be more approachable for everybody than the pay-per-view event from this past weekend. All scheduled fights can be seen on ESPN. The card is quite a bit weaker than what we saw on Saturday, but sports fans will probably watch just about anything at this point, so expect another big set of ratings for ESPN.

We’ll take a look at the fight card with odds from 5Dimes Sportsbook to break down the 11 scheduled bouts and take a deeper look at the main card scraps.

Action starts with the first of three heavyweight fights, as Chase Sherman squares off with Isaac Villanueva. Sherman is a -135 favorite over Villanueva as he looks to snap a three-fight losing streak. This is the UFC debut for “Ike”, who had a cameo appearance in Bellator back in 2016 and has won four straight fights in Fury FC. Villanueva has tapped out five times and been knocked out three times in his career en route to a 16-9 record. This is a big chance for the 36-year-old, who is giving up some size to Sherman.

Sherman fought to get back here after a stint as a bare knuckle boxer and with a couple of Island Fights appearances. He’s earned this right with a new contract and he should win his return match.

Speaking of UFC debutants, Hunter Azure was victorious in his first official UFC scrap. Azure won the judges’ approval over 15 minutes against Brad Katona. He’ll look to improve to 9-0 in his career in this featherweight fracas against Brian Kelleher. Azure is the big -165 favorite against the far more experienced Kelleher, who is fighting for the 31st time in his career. This is his eighth UFC fight and he is 4-3 in those. The 28-year-old Azure has won four of his last five fights by unanimous decision. The striking power isn’t totally there, but the cage IQ is high.

Kelleher has only gone to decision once in his seven UFC fights, so you do have to wonder a bit about the gas tank late in this one. He beat Ode’ Osbourne back in January following a year-long layoff. This is a good step up for Azure, but the -165 line and the movement in his direction suggests that he’ll be up for the task. Azure by decision would cut into the juice a bit in all likelihood.

Another unbeaten fighter looks to stay that way as Omar Morales of Venezuela tries to improve to 10-0. He is -150 to do that, with +130 on the come back for Gabriel Benitez. Morales scored an impressive knockout win over Harvey Park on the Dana White Contender Series back in August and followed that up with his first official UFC dub over Dong Hyun Ma in December. The 5-foot-11 Morales has a size advantage and Benitez is moving up from featherweight to lightweight for this fight. This line looks cheap at -150.

The lone female fight on the card features Sijara Eubanks and Sarah Moras. This fight was on the original bill for UFC 249 when Dana White was told to stand down by ESPN execs from his planned fight card at Tachi Palace. Now Eubanks and Moras fight here in Jacksonville. Eubanks is a massive -365 favorite. All four Eubanks fights have gone to the judges, so the round prop may be a less juicy option when that gets posted, but there aren’t likely to be many reasons to bet this one. That said, Eubanks has lost two straight to Bethe Correia and Aspen Ladd.

This could very well be the best fight on the prelim card as Michael Johnson and Thiago Moises square off in a closely-lined fight. Johnson is the slight favorite at time of writing at -115 and Moises is -105. This will be an interesting fight for the 25-year-old Moises. He’s facing a veteran in Johnson whose best days are behind him, but he still has a much more impressive résumé than Moises and he has a lot more experience.

Johnson needs a win here coming off of back-to-back losses in 2019. The 33-year-old is down to 20-15 in his career overall and has actually lost seven of his last 10 fights. It is hard to know what we will get from Moises, who was overmatched a bit by Beneil Dariush in his first UFC fight. He was a big underdog to Damir Ismagulov in his most recent fight and did lose after going the distance. Moises seems to have a much higher ceiling right now, so the -105 is preferred, but this is a tough handicap.

The last of the prelim fights brings us back to the heavyweight division for Andrei Arlovski vs. Philipe Lins. This is the UFC debut for Lins, who most recently was crowned the champion in PFL. Lins never defended the title because he got hurt. Now he gets a UFC shot and a good one at that with a -155 price tag. The 41-year-old Arlovski is +135 in hopes of better fortunes. Since the start of 2016, Arlovski is 3-9-1 against UFC competition. It is pretty easy to see why betting markets are down on him. He just doesn’t win fights. He probably won’t win this one either.

All in all, Karl Roberson had 371 pretty good days from November 3, 2018 to November 9, 2019. He won three of his four fights and his only loss came when he stepped up in class to fight Glover Teixeira with a pretty quick turnaround. Roberson beat Wellington Turman and Roman Kopylov to round out 2019. It was the UFC debut for both Turman and Kopylov.

Marvin Vettori is a different kind of animal. Vettori is a much better fighter than those two guys. Remember, this is a guy that took Israel Adesanya a full 15 back in 2018 and lost by split decision. He went 2-0 in 2019 with wins over Cezar Ferreira and Andrew Sanchez. Roberson seems to have some potential as a fighter at 29 with a lot of athleticism and a good skill set, but he isn’t as advanced as the 26-year-old Vettori, who got an earlier start and has more polish.

This should be a quality fight. Ray Borg faces the +145 price tag coming off of two wins, including a win over Rogerio Bontorin back in February. Ricky Simon, meanwhile, comes in at -165 off of consecutive losses. Simon also fought Rob Font and Urijah Faber, who are two strong competitors in the bantamweight division. What’s interesting here is that Borg is just going to go ahead and fight as a bantamweight. He tried to return as a flyweight last time out against Bontorin and missed weight badly. Weight cuts have been a big issue for him regardless of division.

Simon has more size and a different method of fighting. He likes to strike. Borg likes the fight on the canvas looking for submissions. Whichever guy is able to dictate the nature of the fight should get the win. Truthfully, that should probably be Simon, who is a much more significant striker and doesn’t mind top control on the ground. He’s got more reach and more experience at bantamweight. Too many things are stacked against Borg here.

This should be a strong fight as well. Alexander Hernandez only has two losses in his MMA career and one of those came against Donald Cerrone 19 months ago. The other came in Hero FC to Jamall Emmers back in 2013. Emmers just made his UFC debut right before the quarantine hit. Drew Dober is a seasoned vet with 31 fights to his name, including a UFC career that spans back to 2013. Dober is the short favorite in this lightweight match.

This is a tough fight to handicap. Dober has won his two most recent fights by first-round knockout, showing some striking power that we had not seen in a while. Hernandez was knocked out by Cerrone, but it remains his only loss in that way. The 27-year-old Hernandez needs a win like this to take his career to the next step. He’s had some very good wins, but this is one that goes on the map and would prove that his Beneil Dariush win wasn’t a fluke.

This one is really too close to call. Dober is solid. Hernandez is solid. The fighters are similar in size and style. Dober is a harder worker, but Hernandez is the more efficient worker. This one has the makings of going the distance, but I’ll take the short underdog.

Ovince Saint Preux has lost three of his last five fights, but his choke out win over Michal Oleksiejczuk felt like the clock turning back. Interestingly, OSP is moving up to heavyweight for the first time to take on Ben Rothwell. Rothwell ended a string of three straight losses by beating Stefan Struve back in December.

This will be an interesting fight for Rothwell. Saint Preux is going to be a much sleeker and quicker heavyweight than the guys he has fought previously. Rothwell may have more striking power than what OSP is used to seeing, especially with the 60-pound difference. Strength could be a big deal as well. Rothwell is also one of the better heavyweights on the mat. Saint Preux is stepping into some uncharted territory here with the change in class and I don’t think it benefits him against a highly versatile fighter like Rothwell. The size and strength edge at +130 is a lot to overlook.

Glover Teixeira continues to get it done. The 40-year-old has won three straight and four of five as he heads into his match with Anthony Smith. Teixeira bested Nikita Krylov, Ion Cutelaba, and Karl Roberson to finish off a perfect 2019. He did win via split decision over Krylov, but it was still the 30th win of Teixeira’s career. He remains an accurate and busy striker, even in his relatively old age. It has been impressive to watch him adapt and better himself, even in his later years as a fighter.

Anthony Smith is a popular name in the light heavyweight division. He could have beaten Jon Jones had he wanted a disqualification for an illegal knee, but that fight is listed as a loss in his biggest opportunity. It didn’t take long for him to bounce back with a win over Alexander Gustafsson less than three months later. Now he faces Teixeira in a fight against another veteran with a lot of cage experience. Teixeira just isn’t on Smith’s level. Not as a striker. Not from a speed standpoint. That isn’t a criticism of Teixeira. It is praise of Smith.