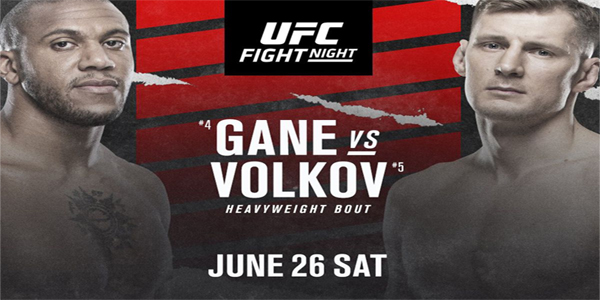 The calm before the UFC 264 storm includes another Fight Night event from the UFC Apex this weekend. The first weekend of July will be a quiet weekend for UFC with no fight card, but we get to finish out the month of June strong with UFC on ESPN+ 48.

The main event will be between Ciryl Gane and Alexander Volkov in a really good heavyweight bout. That is the capper of 13 fights, including six on the main card.

Action begins with lightweights, as Yancy Medeiros looks to end a prolonged losing streak in his match against Damir Hadzovic. Medeiros has lost three in a row dating back to February 2018. Hadzovic has lost two in a row himself, so this is a tough handicap with fighters that have not been trustworthy at all. Hadzovic lost to Renato Moicano in just 44 seconds back in March before UFC shut down for COVID-19.

Medeiros has at least taken longer to beat in each of his last three fights, but was uncompetitive in basically all three of them. Hadzovic is a deserving favorite, but that’s a high price.

Another three-fight losing streak is in play when Justin Jaynes takes on Charles Rosa. Jaynes is just 1-3 in the UFC. He beat Frank Camacho in 41 seconds in his debut back in June, but has dropped three in a row since and the doctors stepped in to stop his February loss. That would seem to be a good sign for Rosa, though Rosa is 1-2 in his last three fights, including a unanimous decision loss to Darrick Minner in February.

Another fight where neither guy is all that deserving of your money. Don’t worry. There will be good betting opportunities on the card.

This fight was originally set to take place in March, but Julija Stoliarenko had lots of trouble with the weight cut and even collapsed twice when trying to get weighed for the fight. The 28-year-old lost her UFC debut in August and is a long shot to pick up her first UFC win.

Julia Avila is 2-1 in UFC, but is coming off of a rare loss, as she fell to 8-2 at the hands of Sijara Eubanks. This is a big bounce back fight opportunity for Avila, but the -360 price is fairly cost-prohibitive. She’s a money line parlay piece at best.

Ike Villanueva scored a huge win last time out against a tough customer in Vinicius Moreira. He was favored in the fight, but it stopped a two-fight losing streak and served as his 15th career knockout. The 37-year-old is a big dog here against Marcin Prachnio, as he gives up some height and age.

It says a lot about Villanueva that Prachnio, who is just 1-3 in the UFC, is favored by this much. Prachnio’s first three UFC fights all ended in first-round KO before he outlasted Khalil Rountree Jr. at UFC 257. The underdog’s price looks a tad rich here and the +165 isn’t a bad gamble.

The UFC debut for Jeremiah Wells is his first fight since September 21, 2019, so you can understand a big line here. The 5-foot-9 Wells was a champion for a brief period in CES and then made his move to CFFC after losing the title in his first attempt at a defense. The 34-year-old is getting a huge opportunity here in place of Ramazan Emeev, who was supposed to be in this fight.

Warlley Alves returned from an extended layoff in January to take care of Mounir Lazzez in very impressive fashion with a first-round knockout. It was only the fourth career KO for Alves, who has three of them in his last five fights. At -232, Alves is a little pricy, but this could be a complementary piece with Avila in that money line parlay.

Shavkat Rakhmonov is a perfect 13-0 with 13 stoppage wins in his career. The 26-year-old Kazakhstan native won his debut UFC fight back in October at UFC 254 over Alex Oliveira with a first-round submission. The over 2.5 was juiced in that fight and Rakhmonov was an underdog. He finished it with 20 seconds to spare in the first round.

Certainly we see a price adjustment here for the fight against Michel Prazeres, who is 26-3 in his career, but has not fought in 28 months. He also lost that last fight. This is Prazeres’s return from a two-year ban for anabolic steroids. He obviously had a lot of success prior to the suspension and even has a win over Gilbert Burns to his name. The -300 on Rakhmonov seems ambitious, but Prazeres is a tough bet to make.

This is a good lead-in to the main card. Danilo Marques is 11-2 with a four-fight winning streak, including two wins in the UFC over Khadis Ibragimov and Mike Rodriguez. Kennedy Nzechukwu lost his first contract fight to Paul Craig, but rebounded nicely to beat Darko Stosic and Carlos Ulberg. These are two promising fighters to be sure, but Nzechukwu is 29 and Marques is 35, so UFC will be rooting for the favorite to win here.

Nzechukwu may not have beaten Stosic had he not been penalized two points for groin kicks. He may very well have beaten Craig without the tap out, though. This will be an important fight whether he wins or loses. These are two very big light heavyweights at 6-foot-6 and 6-foot-5, so we should see fireworks. Nzechukwu gets the slight nod, but this fight should be very competitive.

Former CW champ Jai Herbert lost his UFC debut back in July against Francisco Trinaldo, but it was a little bit of a weird spot for him. Herbert fought a very experienced Trinaldo and did so in Abu Dhabi at Fight Island. While this is a much more traditional setting for Herbert, he’s still fighting another very experienced combatant in Renato Moicano.

Moicano has lost three of his last four fights and seems to be going in the wrong direction after a 13-1-1 start to his career. Moicano has had issues with strikers and that is precisely what Herbert is. On the other hand, Herbert had issues with the experience of Trinaldo in what was largely a boring fight. This seems like a tough fight to cap, but with that being the case, it’s hard not to look at the +200 dog and think he has a fighting chance.

Nicolas Dalby is technically undefeated in UFC with a 2-0-1 record after beating Daniel Rodriguez in November. Dalby did lose to UFC returnee Jesse Ronson by first-round submission, but Ronson tested positive for metandienone and will now serve a two-year ban. In that respect, Dalby’s UFC tenure has been less impressive than it seems.

Tim Means is a very experienced fighter and this will be his 45th career fight. He has a big size edge here at 6-foot-2 and has the backing of the betting markets to drive up his favorite price. Means lost to a common opponent in Rodriguez, but has won three of his last four and has fought a better group of opponents.

Daniel Pineda’s UFC return against Herbert Burns was a very emotional and impressive performance for the 35-year-old, but he followed that up with a knockout loss to Cub Swanson four months later. Now Pineda slots in against Andre Fili and finds himself a big underdog at 145 pounds. Pineda’s win over Burns came in his first UFC fight in more than six years.

Fili went just 1-2 in 2020 and was actually knocked down in the first round by Charles Jourdain, but found a way to win by decision. Four of the last five fights for Fili have gone the distance. Pineda hasn’t gone the distance in nearly five years. That makes for a really interesting fight stylistically, as Fili prefers to control fights from the outside and he has a four-inch height advantage with which to do that in this fight.

Timur Valiev technically hasn’t lost since 2016, but he did lose to Trevin Jones back in August of last year. Jones popped a positive test for marijuana and the win was overturned. That was the UFC debut for Valiev, who followed that up with a win over Martin Day in February. Valiev was ahead in the fight against Jones, but got caught with that one magic shot and went down like a sack of bricks.

Raoni Barcelos has won five in a row since making the leap from RFA to UFC. He was the champion with two title defenses in RFA. In UFC, he hasn’t fought a whole lot of quality competition, but at least he’s fought more UFC guys than Valiev. He also had a defense in RFA against Bobby Moffett, a name known to most MMA fans.

This is a bit of a big price for Barcelos against somebody in Valiev who could very well be undefeated, but it does seem like a big step up for Valiev as well. Still, the +185 looks enticing here.

Ovince Saint Preux goes back to heavyweight for this matchup against Tanner Boser. OSP missed weight against Jamahal Hill and lost back in December in what was supposed to be a light heavyweight bout. He beat Alonzo Menifield in September at light heavyweight. He lost his only official UFC heavyweight fight by split decision against Ben Rothwell.

As heavyweights go, OSP is lighter than most. We’ve seen Boser really struggle with veteran fighters, though. He just lost back-to-back fights to Ilir Latifi, a light heavyweight turned heavyweight, and Andrei Arlovski. Fighters with multi-faceted skill sets are trouble for Boser. He needs a guy that wants to stand and throw. He doesn’t have that here. Even though OSP is giving up some weight, he’s very live at +150.

This is a very good main event. Alexander Volkov is an underdog with his 33-8 record as he takes on undefeated Ciryl Gane, a rapid riser in the MMA ranks with an 8-0 mark. Volkov has had a lot of different stops, but has been in the UFC since 11/19/16. He is 7-2 in nine UFC fights, with losses to Derrick Lewis and Curtis Blaydes.

Gane is an outstanding fighter with lots of paths to victory and some of the best wrestling skills in the division. Gane needs a win like this to stay on track for a title shot.

It will be interesting to see how Gane handles the 6-foot-7 Volkov, who moves better than his recent opponents. Volkov also had Derrick Lewis beat, but got knocked out in the third round. This should be a truly great fight. Gane should win and stay perfect, but it won’t be easy.

GET UP TO A $1000 WELCOME BONUS FROM BETONLINE SPORTSBOOK