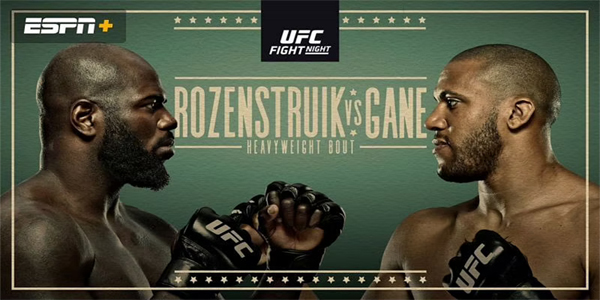 Heavyweights take center stage again this week in the UFC as Jairzinho Rozenstruik and Ciryl Gane headline the UFC Vegas 20 card at the Apex Training Facility in Sin City. UFC on ESPN+ 44 features 12 fights spread across the divisions, including three women’s fights for your viewing and wagering pleasure.

We’ll break the card down with odds from BetOnline Sportsbook and highlight the main card to a higher degree.

You can get a 50% Deposit Match Bonus up to $1,000 from BetOnline Sportsbook or take advantage of special Bitcoin Sign-Up Bonuses when you deposit with cryptocurrency.

Veteran fighter Max Grishin will be in a pro MMA fight for the 42nd time in his career when he steps into the Octagon against Dustin Jacoby. Grishin is 31-8-2 overall and 1-1 in the UFC. He lost to Marcin Tybura in his debut fight, but then knocked out Gadzhimurad Antigulov two seconds before Round 2 ended back on October 17. Grishin was way ahead on the cards in the fight, but he isn’t being given a great chance here against Jacoby. Jacoby is 2-0 in UFC, including a KO win over Justin Ledet in his first contract fight. Jacoby makes some sense here, but that is a big price against a very accomplished and experienced fighter.

Former LFA top contender Vince Cachero lost his UFC debut fight to Jamall Emmers back on August 1. He’ll now slot in against Ronnie Lawrence, who impressed enough on the Dana White Contender Series in September to get a contract. Lawrence was away from MMA for a long time from October 2016 to February 2019 and is 3-0 since the return, including a quick LFA cameo. I’m not sure Lawrence is worthy of a price this big, but Cachero has lost three of his last four fights, including a title loss in LFA to Casey Kenney. Two of his three losses have been against quality opponents. I like the dog a little based on the price.

Alonzo Menifield goes from spotlight fights against Ovince Saint Preux and Devin Clark to taking on William Knight on the undercard of this Fight Night event. Menifield needs a win badly here, though. He went 0-2 in 2020 and needs to get back on track. He draws Knight here, a fighter who impressed enough on DWCS to get a contract and then fight 25 days later with a decision win over Aleksa Camur. The 32-year-old Knight doesn’t have as much of a resume as Menifield, but he’s on an upswing, while Menifield is on a downswing. The line here seems pretty telling, no?

Sabina Mazo lost her UFC debut against Maryna Moroz. It is the only loss of her career in 10 pro MMA fights. She’ll draw veteran fighter Alexis Davis in this one. Davis has lost three straight fights and hasn’t fought since July 27, 2019. She must have some sort of chance here with where this line is listed, but I don’t really see it. The 36-year-old is on a long layoff and Mazo is 6-1 in decisions, which is what this fight is supposed to be. It’s Mazo for me.

No total is listed for this fight and I’m not sure where it slots in on the schedule, but Randy Brown withdrew from the scheduled fight against Alex Oliveira. Now Oliveira finds himself an underdog to Ramazan Kuramagomedov. Kuramagomedov is 8-0 in his MMA career with a stop in CFFC and another in PFL to his name. He most recently fought in front of Dana White on the Contender Series and won by split decision, but impressed enough to be the replacement here.

Thiago Moises has won three of his last four fights, including a couple of wins over Bobby Green and Michael Johnson in 2020. He slots in here against the inconsistent Alexander Hernandez, who split his 2020 fights and is just 2-2 over his last four. He was actually knocked out by Donald Cerrone and then also KO’d by Drew Dober. He beat Chris Gruetzemacher in his most recent scrap. I don’t see a reason to lay a price this big with Hernandez. He’s the better fighter, but he’s not trustworthy at all. I’d have to look Moises or nothing here.

BET UFC WITH A WELCOME BONUS AT BETONLINE SPORTSBOOK

Kevin Croom has a big spot here against Alex Caceres. His thoroughly impressive win over Roosevelt Roberts back in September was eventually overturned because he tested positive for marijuana. It doesn’t take away the fact that he locked in a guillotine choke less than 30 seconds into the fight. Croom has now won four straight fights, though the records will say that the Roberts fight was a no contest.

Caceres has three straight wins himself, all in impressive fashion. These are two guys that don’t have the best records, but have had great success recently in their fights. This is a tough one to gauge in my opinion. Both guys locked in quick submission wins last time out, but typically go much deeper into the fight. The match against Roberts was Croom’s UFC debut, so you can understand why he’s a big underdog here. I think this fight is closer than this, so I’d lean with Croom, but it’s a hard one to pick.

This is a very big favorite role for Angela Hill, who lost two split decisions in 2020. The first was to Claudia Gadelha and the second was to Michelle Waterson. Those are two better fighters than Ashley Yoder and Hill had been in a nice groove prior to that. She was taken off of the UFC 256 card because of a positive COVID test, but now she’s back and has had time to recover before taking on Yoder.

The 33-year-old Yoder scored a nice win over Miranda Granger back in November. It was a sound and thorough performance from Yoder, something we haven’t seen a whole lot lately. She controlled the fight and was easily the more active striker. We have a big of a contrast in styles here, but Hill’s strength and power should ultimately win the day.

Pedro Munhoz and Jimmie Rivera are two longtime fixtures in the UFC. They’ll square off here. Munhoz has dropped two straight, going the distance with both Aljamain Sterling and Frankie Edgar in his most recent scraps. The Edgar fight came followed a 14-month layoff and he went the full 25 in the split-decision loss. It wasn’t the best of performances from Munhoz, but he was coming off of a long hiatus.

This fight was originally set for UFC 258, but it’ll happen now. Rivera also returned over the summer after a long layoff. He beat Cody Stamann after being away for 13 months following back-to-back losses to Sterling and Petr Yan. I like Rivera here. Sterling and Yan are two quality opponents, so I don’t want to hold those against the 31-year-old. Furthermore, with the heavy chalk on the over, the fact that Rivera has 17 decision wins to a 5-5 record in decisions for Munhoz points me in that direction.

The last of three women’s fights scheduled for this card features Montana De La Rosa and Mayra Bueno Silva. De La Rosa has dropped two of her last three, but it didn’t seem to be as bad statistically as the box score would suggest from her unanimous decision loss to Viviane Araujo back in September. Silva lost to Maryna Moroz in March, but then defeated Mara Romero Borella by submission in September for her sixth career stoppage win in seven fights.

De La Rosa’s last three fights have gone the full 15. This looks like a fight where top control is going to decide the outcome. Both fighters prefer to be down on the mat in the clench. Silva is likely the stronger of the two fighters here and she is the one I would expect to get the upper hand.

The impressive run for Magomed Ankalaev is expected to continue here in this fight against Nikita Krylov. Ankalaev is 14-1 in his career and has won five straight UFC fights. Stepping up in class against Paul Craig led to his first loss, when Craig locked in a submission and got the tap out just one second before the final bell. Ankalaev was winning the fight at that point in time.

Krylov is a solid fighter, but when he has stepped up in class, he has faltered. He’s lost to Glover Teixeira and Jan Blachowicz in the UFC and has wins over OSP and Johnny Walker. Ankalaev is much closer to Teixeira and Blachowicz than the other two. The 28-year-old Ankalaev is working his way towards a title shot and I don’t think Krylov can stand in his way.

Just as we saw last week, one punch can be all it takes to win a heavyweight fight. Just ask Curtis Blaydes. His takedown attempt was met with a violent uppercut from Derrick Lewis and that was the end of last week’s main event.

Jairzinho Rozenstruik and Ciryl Gane are in the main event of this UFC Fight Night event. Rozenstruik is 11-1 with his only loss coming 20 seconds into the fight against Francis Ngannou, who has some of the biggest power we’ve ever seen. Gane has not lost. When I look at this fight, I see that Gane does have more paths to victory, but I’m getting +220 on an underdog with vicious power and only one loss against an elite opponent to his name.

That’s good enough for me to take the underdog shot.