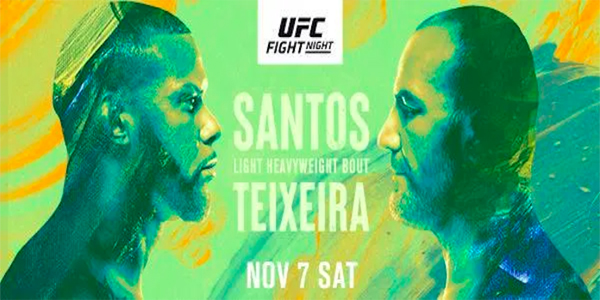 Another week, another UFC event as we get strapped in for UFC Fight Night 182, aka UFC on ESPN+ 40, with a main event of Thiago Santos and Glover Teixeira. In fact, there are actually two UFC cards this week with a Dana White Contender Series card midweek.

Eleven fights are on the docket for this one, headlined by that main event of UFC veterans. There are a lot of familiar names on this fight card, as we only have two debut fighters and a handful of promising youngsters on the undercard.

We’ll use the odds from BetOnline Sportsbook to break it all down for you and place a little extra emphasis on the main card bouts.

This fight does not have a line of time of writing because Lopez’s original opponent, Felipe Colares, tested positive for COVID-19. This is only the second UFC fight for Gustavo Lopez, who lost to Merab Dvalishvili back in June. The 34-year-old Anthony Birchak was released from the UFC in February 2017 after going 2-2.

It turns out that Ramiz Brahimaj is the first of our two debut fighters on the card. Brahimaj was supposed to fight over the summer, but one of his cornermen got COVID-19 and he was bumped from the card. The former LFA welterweight has not fought since March 22, 2019, so he’ll have a ton of cage rust to shake off here against Max Griffin. Brahimaj has won all eight times by submission, but has lost two decisions, if this fight gets to that point.

Max Griffin desperately needs a win here. He’s lost four of his last five fights, all of which have gone to decision. His lone win was by majority decision, so even that one was iffy. Griffin was 12-2 when he joined the UFC back in 2016, but he’s gone 3-6 and it’s a wonder if he’ll even be able to stick around much longer past this fight. He has fought decent competition, hence the -145 price tag. The long layoff for Brahimaj makes it too hard to bet the dog. The decision price is heavily juiced at -185, but each of the last seven for Griffin have gone the full 15.

We’re reaching the end of the line for 36-year-old Darren Elkins. He’s lost four straight fights as he heads into this one a big favorite against Eduardo Garagorri. Elkins lost to Nate Landwehr back in mid-May to run his streak to four, with his other losses against Ryan Hall, Ricardo Lamas, and Alexander Volkanovski.

Garagorri, on the other hand, is 1-1 in the UFC. He’s coming off of his first career loss, which he’s had almost a year to stew about. He is a multi-faceted fighter with four knockout wins, six submission wins, and three decision wins. Elkins is on the wrong side of his career. An upset makes sense here.

This is only the second UFC fight for big favorite Alexandr Romanov, who brings a perfect 12-0 record with 12 stoppage wins into this fight. The 29-year-old beat Roque Martinez, but now steps up in class against a UFC veteran in Marcos Rogerio de Lima. The 35-year-old known as Pezao has alternated wins and losses over his last eight fights. Only one has been a decision, which he did win. The former light heavyweight has had most of his issues with taller fighters. Romanov is not one, but the line still suggests that this is a bad matchup for Rogerio.

This was a late posting to the card with newcomer Jamey Simmons in the first fight of his four-fight contract. He’ll face Giga Chikadze, who just improved to 11-2 with an easy 15-minute win over Omar Morales back on October 10. This will be the fourth fight of 2020 for Chikadze, but the 32-year-old has a great gas tank. He’s gone 15 minutes in each of his last four fights. Simmons just fought October 16 to stay sharp in a low-end promotion. It’s hard to lay -550 here, but as an open parlay piece or something, Chikadze should win rather convincingly.

Trevin Giles and Bevon Lewis will square off in the last fight exclusively on ESPN+. The main card will also be on ESPN2. Lewis is the slight favorite in the closest thing we have to a toss-up fight on the undercard. Lewis has lost two of his last three, but there is no shame in losing to Uriah Hall or Darren Stewart. He bounced back with a win over Dequan Townsend in January.

Giles also lost twice, to Zak Cummings and Gerald Meerschaert, before getting back on track with a win over James Krause. Giles has only lost twice by submission. He’s won two decisions and 10 by stoppage. Lewis is 4-1 in decisions and 3-1 in KO/TKO, but has no submissions. If Giles has a takedown defense issue, Lewis is unlikely to exploit that. Giles gets the nod here at -105.

WAGER ON UFC AT BETONLINE SPORTSBOOK

The only women’s fight on the card is this women’s strawweight match between Claudia Gadelha and Yan Xiaonan. Gadelha is the underdog, despite winning three of her last four fights. She topped Angela Hill back in May after nearly 10 months on the sidelines. Gadelha’s loss to Nina Ansaroff is really the only bad performance. Her other losses were to Joanna Jedrzejczyk twice and Jessica Andrade, two former champions.

Yan Xiaonan is a perfect 5-0 in the UFC. She hasn’t fought fighters the caliber of Andrade or Jedrzejczyk, but she’s comfortably beaten everybody put in her path. The 31-year-old’s lone loss came over a decade ago. She’s one of the better strikers in the division, but her takedown defense will get a workout here against Gadelha. I actually like the underdog to have a great chance in this fight, especially if she gets it to the ground with top control.

Ian Heinisch’s big bounce back win over Gerald Meerschaert may be the catalyst for the line swing in this fight against Brendan Allen. Allen was victorious over replacement Kyle Daukaus when he was supposed to fight Heinisch back in June. Allen is 15-3 overall and 4-0 in the UFC, including his debut appearance on the Dana White Contender Series. The 24-year-old seems to be a promising prospect and he was an LFA champion early last year before making the UFC leap.

Heinisch, though, is a veteran at 32 with a lot of big names on his list of past results. After losses to Omari Akhmedov and Derek Brunson, the first-round knockout of Meerschaert was a side of him we hadn’t seen much. Heinisch has seven decision wins and seven stoppage wins.  Will the wily veteran Heinisch beat the younger, taller, lankier Allen? It’s hard to say, but Heinisch has taken the money to this point. This is close to call. I’d lean with Allen, but not confidently.

Raoni Barcelos replaced Jack Shore for this fight and he’ll be a big favorite when the opening bell rings against Khalid Taha. We haven’t seen Barcelos in a long time, as he last fought in December, but did extend his UFC winning streak to four against Said Nurmagomedov. We haven’t seen Taha in an even longer time, as the 28-year-old has been out of action since October 5 when he beat Bruno Silva at UFC 243.

Barcelos is a heavy favorite here over Taha, who has only lost twice in 15 pro fights. These two fighters profile pretty similarly, except that Barcelos is a little taller and a lot more active. That would seem to be the difference here based on the line.

Andrei Arlovski and Tanner Boser meet in the second of two heavyweight fights on the slate for Saturday. Boser is a massive favorite in search of his third win in a row and fourth out of five in the UFC. The big Canadian won twice in four weeks over the summer with knockouts of Philippe Lins and Raphael Pessoa. Arlovski also beat Lins back in May, so the two have a common opponent, but that seems to be about all that they have in common based on the odds. Arlovski is also 41 years old now and Boser, who seems to be getting some favorable matchups in hopes of elevating his status, is just 29.

The over 2.5 at -145 is pretty interesting here. Boser’s had knockouts in his last two fights, but went the full 15 in his first two UFC matches. Three of the last four for Arlovski have gone the distance. It is a sign that Arlovski’s striking power has fallen quite considerably, but he’s certainly experienced enough to not get himself in too much trouble. I think that’s the play here, with Boser by decision if you want to cut down the vig.

After a positive COVID-19 test for each one of these fighters, the match between Glover Teixeira and Thiago Santos is finally going to happen. Teixeira has found a second wind of late with four straight wins, including a very impressive win over Anthony Smith back on May 13. Teixeira may be 41, but he is still performing at a very high level, all things considered. He still finds himself a big underdog here in this spot against Santos.

The 36-year-old Santos hasn’t fought since UFC 239 when he lost to Jon Jones. It was Santos’s first loss in four fights. There is certainly nothing wrong with losing a fight like that and Santos took Jones the full 25 and lost by split decision in what was considered to be very controversial. Santos badly tore up his knee in that fight and hasn’t been out there since. After stepping up in such a huge way to face Jones, and now coming back from a major injury, there’s no way I could lay -240 here.