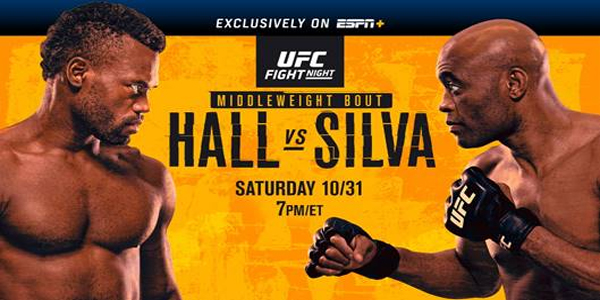 The illustrious career of Anderson Silva will come to a close on October 31 following his main event match with Uriah Hall. Dana White has brought the UFC back stateside to the UFC APEX training facility for this UFC on ESPN+ 39 fight card.

There are 12 fights on the card and a lot of good fighters will be in action, but the big story is undoubtedly that this will be the swan song for Silva, who is a veteran of 44 professional MMA fights. He’s a big underdog as he’ll hop to go out on a high note.

We should have a lot of high notes on this card. We’ll take a look at the odds from BetOnline Sportsbook and dive into all of the matches on the card, with some more detailed breakdowns on the main card scraps.

Action begins in the bantamweight division as favorite Miles Johns looks to bounce back from his first career loss. Johns was defeated by Mario Bautista back at UFC 247 by knockout. He was 10-0 up to that point, with six decision wins. He’s not a big striker and it cost him in the loss to Bautista. The former LFA champ takes on a former LFA contender in Natividad, who is making his first UFC appearance. While we’ve seen Johns on the big stage, Natividad has six stoppage wins and his lone loss came in a nine-second stunner against Glen Baker more than three years ago. Natividad did once beat Irwin Rivera, who now has three UFC fights to his name after being a champ in Titan FC. I’ll look at the underdog here.

Cortney Casey is 1-1 in 2020 with a submission win over Mara Romero Borella and a submission loss to Gillian Robertson with a quick turnaround of just 35 days. She draws Priscila Cachoeira here, who scored a very impressive, and surprising, knockout of Shana Dobson back in February. Cachoeira was on short notice in that fight and Dobson was -200. Cachoeira had lost three straight prior to that. Rather than lay a big number on this fight with Casey, who has lost three of her last five, the under 2.5 at +200 is a nice look. Casey’s last two fights have ended in finishes, although one was late in the third round, and two of Cachoeira’s four UFC fights were unders. Under 2.5

Dustin Jacoby was impressive on August 4 against Ty Flores in his Dana White Contender Series debut, but impressive enough to be laying over $3 here? Jacoby is 12-5 in his career, including two Bellator losses. He was away from pro MMA from January 2015 to June 2019 before coming back to a win in SCL and then the DWTNCS win. Justin Ledet has dropped three straight in the UFC, but he’s fought decent competition. He was 9-0 before the loss to Aleksandar Rakic in July 2018. Jacoby is a great kickboxer and that skill set may be too much for Ledet, but this price is too much for me. Pass

August 3, 2019 was a big day for then 35-year-old Cole Williams. He got his first UFC opportunity against Claudio Silva. He lost by first-round submission. Now he gets another crack, this time against Jason Witt, who also had a disappointing UFC debut. Witt lost to Takashi Sato in just 48 seconds. It wasn’t really Witt’s fault, as he was a late replacement for Ramiz Brahimaj, who had to withdraw because one of his cornermen tested positive for COVID. It was a huge step up for Witt against an excellent fighter in Sato. This spot should go better for Witt and the -143 price may be cheap for a slightly younger fighter with a good ground game. The ground game is what tripped Williams up against Silva. Jason Witt

Jack Marshman’s stock has fallen quickly. He’s lost three of his last four fights and he’ll be shaking off nearly 17 months of cage rust when he takes on Sean Strickland. The 17 months pales in comparison to the fact that this will be Strickland’s first fight in more than two years. He, too, struggled before the layoff, as he was just 2-2 in his four fights before being sidelined from a bad motorcycle accident. There is no way I could lay -330 on a guy coming back from having multiple body parts repaired. Marshman isn’t a great bet, but at +270, he’s certainly worth more of a gamble than his opponent.

The UFC debut for Victor Rodriguez comes in a big underdog role against Adrian Yanez. Rodriguez is replacing Aaron Phillips, who withdrew from the card on October 20. Yanez, who went 25 minutes with Miles Johns in an LFA title fight two years ago, shined on the Dana White Contender Series in August with a KO win over Brady Huang. He was a main event fighter in LFA before taking his UFC shot at the age of 26. Rodriguez has been fighting in much smaller promotions and it’s pretty easy to see why Yanez is a huge favorite here. It’s Yanez or nothing in this fight.

Based on the line, the only thing Chris Gruetzemacher will win is longest last name on this UFC card. Alexander Hernandez is just shy of a $4 favorite as he looks to bounce back from a loss to Drew Dober back in May. Hernandez has actually lost three of his last four after starting 10-1 as a pretty good prospect in the lightweight division. The 28-year-old is taking on a fighter who hasn’t fought since April 7, 2018, so maybe that will help him out here. I just don’t see any reason to get involved in a fight like this. Pass

The theme of big favorites continues into the main card with Thiago Moises vs. Bobby Green. All action is on ESPN+, so you won’t even have to change the channel. Green just won his third straight fight of 2020 with a win over Alan Patrick on September 12. He’s gone 15 minutes in each of his last eight fights, so the -240 on the total isn’t really high enough here. Green is actually just 4-5-1 in his last 10 UFC fights, but he has ripped off three straight this year to get his career back on track.

Thiago Moises had gone to decision three straight times before a submission win over Michael Johnson. Moises is 13-4 and has never lost via stoppage. He’s got nine stoppage wins, but is only 4-4 in decisions, which is likely a major reason why Green is such a big favorite here. There’s no way I’d lay the -305, but I’d be shocked if this didn’t go to the cards.

A couple of real big, real scary dudes square off here in the heavyweight division. Maurice Greene stands 6-foot-7 and 255 pounds and Greg Hardy is 6-foot-5 and 265 pounds. This will be a violent fight to say the least. We’ll see how Hardy does here after going 15 minutes in each of his last two fights. Each of the last four fights for Greene has ended in a stoppage, with two wins and two losses.

Hardy is a massive favorite here and there is a perception that follows him around because of how he started his career. As he has moved up the ranks, though, he has had more and more difficulty. I’m not sure he’s worthy of this big price against a guy in Greene that is surprisingly adept in the clench and on the ground. He’s got five wins via submission. Hardy will have to keep this fight upright and the more classically-trained Greene may be good enough to get it to the ground.

I don’t have a strong play here at all, but the underdog at +270 would be the lean.

This was originally supposed to be Makhmud Muradov vs. Krystzof Jotko, but Jotko broke a toe and now Kevin Holland will take his place. This will be Holland’s fourth fight in about 5.5 months. This will be Muradov’s first since December. He is 2-0 in UFC and the 30-year-old beat Alessio Di Chirico by decision and Trevor Smith by KO to round out 2019.

He’s 24-6 with 16 career knockouts and will provide a good test for Holland. Holland, though, beat Joaquin Buckley, who has the highlight of 2020, Alexander Hernandez, and Darren Stewart. Maybe Muradov is worthy of this much respect, but Holland has had a huge 2020. The turnaround is fairly quick, but he did the same thing for the Stewart fight and outlasted him over 15 minutes. I think it’s being priced too much into the line.

It is a breath of fresh air to see some competitive lines on this card. Bryce Mitchell, the TUF 27 winner, won both fights in 2019 and then stopped Charles Rosa back on May 9 with a unanimous decision win. The 26-year-old is up to 13-1 with nine submission wins. His opponent, 30-year-old Andre Fili, has nine knockouts to his name. We’ll find out a lot about Mitchell here, as he takes on an experienced fighter with a lot of experience in the cage. Fili has 28 pro fights to his name and his seven-year anniversary in the UFC was this week.

He’s fought a lot of top guys along the way, something we cannot really say about Mitchell. In fact, in some respects, this will be pretty clearly the hardest fight for Mitchell to date. We’ll see how he does stepping up in class. I like to err on the side of caution with fighters that haven’t been in this type of spotlight. He’s in the lead-up to the main event with an icon fighting for the last time in Anderson Silva. This is a much brighter light than what Mitchell has seen. I’ll pay to see if he can prove me wrong.

It all started on June 25, 1997. Anderson Silva beat Raimundo Pinheiro in Campo Grande, Brazil. He worked up the ranks around the world, including Pride and Shooto, and made his UFC debut on June 28, 2006 against Chris Leben. It took less than a minute for a star to be born.

Silva’s star no longer shines as bright in the cage, but what he has done for the UFC and MMA in general has been nothing short of amazing. The fact is that Silva has lost six of his last eight fights and had one win overturned for a positive drug test. It is past time for the 45-year-old to call it quits, but he’ll get one last matchup here against Uriah Hall. Silva, who did manage to go 15 minutes with Israel Adesanya last year, hasn’t fought since May 11, 2019.

Hall also hasn’t fought in 2020 yet, but the 36-year-old would seem to probably have a little more tread on the tires than Silva. Granted, aside from his UFC 226 loss to Paulo Costa, Hall’s last two fights have been Bevon Lewis and Antonio Carlos Junior. At least Silva has still been fighting world-class guys. It’s not like Silva’s losses have been to stiffs.

Ultimately, I don’t know what happens here and don’t really believe either side is worth betting. I’ll just root for Silva to end on a win.