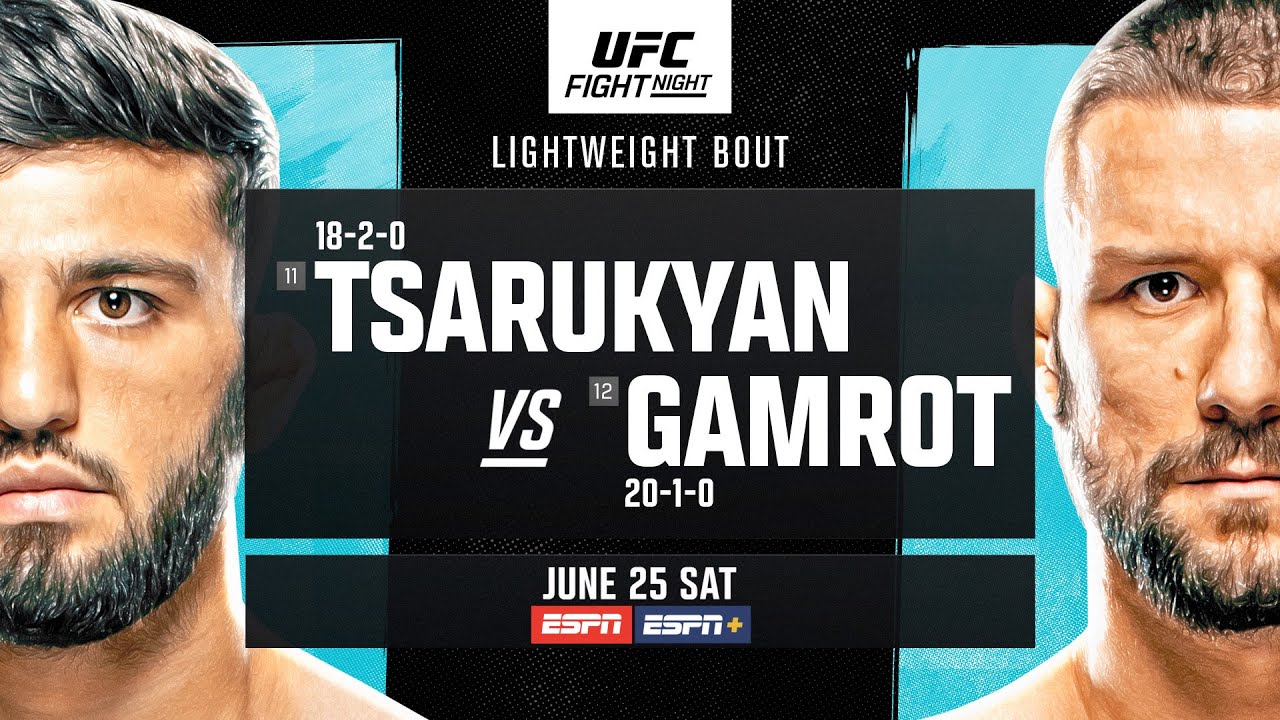 There’s another stellar UFC card coming up this weekend and this time it will be broadcast on ESPN. While there are no title fights on tap, bettors who watch the sport closely should be able to find an edge in a few of the showdowns. Let’s take a closer look at three bouts and see if we can home in on some winners.

Bet on the UFC at BetAnySports and get a 55% new user sign up bonus!

Tsarukyan made his debut in the UFC three years and hasn’t looked back. While he lost his first fight, he’s picked up five straight victories – including back-to-back stoppages in his last two. Looking back to his first loss, it was to Islam Makhachev, who is now 20-1 in his career, so that loss is nothing to be embarrassed about.

As for his Tsarukyan’s opponent on Saturday, Mateusz Gamrot, he also dropped his first UFC fight. However, he’s won three straight fights since that moment and is now ranked inside the Top 15 in the lightweight division. Those three fights all ended in some form of stoppage, one being a knockout, another a submission and a final one being a TKO victory.

We are looking at two fighters that have the potential to dominate their division for years to come. They are young and hungry for that shot at a title. One of these two is going to get a win and move into the top 10 in the division. Tsarukyan has shown more so far in the UFC, so he’s the best bet here.

Neil Magny will be taking on Shavkat Rakhmonov in another exciting matchup on Saturday. Magny has been incredible in the welterweight division and enters having won five of six. He is currently tied with Georges St-Pierre for the most wins in the division at 19. The 34-year-old is consistently competitive regardless of the competition in front of him. He’s never to be counted out during a fight no matter how it looks on paper. The oddsmakers at BetAnySports don’t expect him to win in this spot, though.

As for his opponent, Rakhmonov is making a fast ascent up the UFC ranks. He’s just 27 years old but is 15-0 in his career and few fighters have been able to go toe-to-toe with him. Of his 15 wins, not once has a fight made it to the judges’ scorecards.

While Magny has the tenure here, this looks like a steppingstone match for Rakhmonov. Look for him to finish Magny in one way or another.

Pick: Fight Will Not Go the Distance

One of the biggest favorites on the card is Umar Nurmagomedov, who is a massive -800 at BetAnySports. That’s one of the best prices as other bitcoin sportsbooks have him higher.

He’s taking on Maness, who has been great so far in his UFC career. He is 3-0 in the Octagon and 14-1 throughout the course of his fighting career. His last two fights in the UFC have both been second-round stoppages, pushing him up the rankings of the bantamweight division.

As for Nurmagomedov, he came to the UFC with ridiculously high expectations thanks to being related to Khabib Nurmagomedov, who is one of the sport’s all-time greats. He’s done nothing but impress so far as he’s now 14-0 in his career. He’s only had two UFC fights so far, but both were impressive submissions. With the juice being so high in this one, betting him to win via submission makes more sense here.