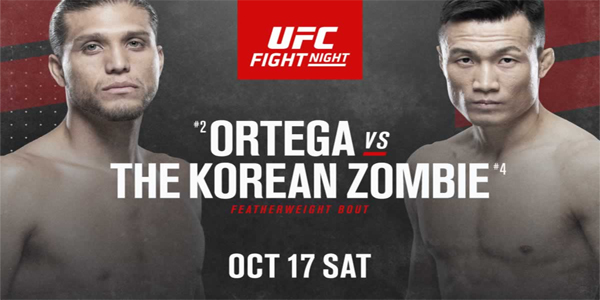 When UFC on ESPN+ 38 starts at Fight Island, we will be one week away from the massive matchup between Khabib Nurmagomedov and Justin Gaethje at UFC 254. Fortunately, Dana White and the UFC matchmakers have given us a really good set of appetizers in advance of the main course.

UFC Fight Night 180 features a main event of Brian Ortega vs. Korean Zombie as the highlight match of this 12-fight card on Saturday October 17. We’ve had some hit and miss cards during the period without fans in both Las Vegas and Abu Dhabi, but this is not one of them.

Some talented newcomers, some proven UFC vets, and probably the best main event we’ve had outside of a pay-per-view card should make for a good evening on Saturday.

We’ll break down the card with odds from BetOnline Sportsbook and pay a little more attention to the main card matches. The entire card can be seen on ESPN+.

Before we get Khabib Nurmagomedov next week, we get Said Nurmagomedov on this card at -410 for his match against Mark Striegl. This is the UFC debut for Striegl, who is making his UFC debut after posting an 18-2 record across multiple promotions. Fourteen of his wins have come via submission. Nurmagomedov lost last time out against Raoni Barcelos to fall to 2-1 in the UFC. Said’s a decision machine, as only six of his 13 wins have come via stoppage. He’s 7-2 in decisions and the total here is 2.5 juiced to -240 on the over. There really isn’t much worth playing in the opener.

Gadzhimurad Antigulov is +290 in this light heavyweight matchup against Maxim Grishin. Grishin is -355 with a total of 1.5 and -135 on the under, so Grishin by stoppage looks like the most likely outcome here. He lost his UFC debut to Marcin Tybura, but he took that fight as a heavyweight on short notice at UFC 251, so that probably isn’t the best barometer. The 36-year-old is 30-8-2 in his career and takes on a guy in Antigulov that has dropped three straight in the UFC, all by first-round stoppage. Once again, though, I don’t think that there are great betting opportunities in this fight.

Jamie Mullarkey is a -141 favorite at 155 pounds against Fares Ziam. Ziam was not impressive at all in his UFC debut fight against Don Madge back in September 2019, but it did represent a big step up in class for the 23-year-old. Mullarkey also lost his UFC debut a month later. Neither one of these guys has much experience at the top levels, but they are on more equal footing against each other. Ziam’s lack of activity in the first fight is counting against him here based on the line and Mullarkey just looks to be the more active fighter with more paths to victory.

Middleweight John Phillips was a lamb led to slaughter last time out. The 35-year-old Welshman was picked to fight Khamzat Chimaev. He was lucky to get into the second round. He’ll face Jun Yong Park this time, but it doesn’t look like it will be much more fun for him. Park is the -255 favorite here, as Phillips has lost four of five, save for what seems like an accidental outlier with a win 17 seconds into his fight with Alen Amedovski. Park is 1-1 in the UFC, but the 29-year-old seems to have a much higher ceiling now that Phillips seems to be well into the twilight of his career. The line is heavy at -255, but probably justified and supported with a Park win.

There are two women’s fights on the card and this is the first one, as Gillian Robertson is -220 against Poliana Botelho. Robertson bounced back very nicely from a loss to Maycee Barber with a solid submission win against Cortney Casey. Robertson showed some chin and a lot of technique in that fight and the 25-year-old has been rewarded with a big favorite price here. This is a striker vs. grappler sort of fight, as Botelho has six career knockouts in eight wins and Robertson has six subs in her eight wins. Botelho is fighting for the first time in 18 months here and Robertson has the higher ceiling. A Robertson/Park parlay wouldn’t be a bad approach.

A couple of UFC debutants meet here as undefeated Mateusz Gamrot is a -290 favorite against Guram Kutateladze. The Polish Gamrot is 17-0 and just got done winning back his KSW lightweight title in the sixth title fight of his career. He draws a tough competitor here in Kutateladze, who has won eight fights in a row across different promotions, including a couple stops in Brave CF. Gamrot is an American Top Team fighter, so we should expect better training and a stronger pedigree, which is what the -290 line also implies. KSW is also one of the stronger European promotions. The price is probably justified here, but we don’t really know much about these two fighters.

Thomas Almeida has not been in the Octagon since January 20, 2018, but he is still getting lots of respect for this fight against Jonathan Martinez. The 29-year-old Almeida was set to face Alejandro Perez in his return from major eye surgery and other injuries, but Perez tested positive for COVID-19, so Martinez slots in. It will be interesting to see how Almeida responds to any pressure, pain, or vision concerns with that surgically-repaired eye. It was an injury that kept him out a lot time.

Martinez beat a big name in Frankie Saenz last time out, but Saenz isn’t nearly the fighter that he once was. It was still a good bounce back win for Martinez, who lost via controversial split decision to Andre Ewell at UFC 247. Had things gone slightly different for Martinez, we’d be looking at a four-fight winning streak. Because we’re not, this price might be a little bit off. Almeida was a decent prospect getting big fights at the time of his absence, but he’s long removed from that. Maybe he’ll be sharp, but Martinez projects to be sharper with two fights in 2020 already.

What do we make of Claudio Silva? He brings a 14-1 record into this fight, but will be fighting for the first time in 14 months. Three straight submission wins for Silva followed a 3.5-year layoff from November 2014 to May 2018. It looked like the 38-year-old never missed a beat. He’s 38 with a long list of injuries, which likely explains the big line here for James Krause. The 34-year-old lost to Trevin Giles at UFC 247, but had won four straight prior to that.

The question here for Krause is whether or not Giles’s speed is what negatively impacted him or if it was something else. Krause beat an aging Sergio Moraes last November in his first fight after 14 months off of his own. Silva won’t have the same speed and athleticism as Giles, but he does seem to be a better version of some of the veterans that Krause has matched up against. To me, the underdog carries more value here with that +142 price tag than Krause in the -160s.

It was a nice debut win for Modestas Bukauskas on July 15 to score a first-round knockout right at the end of the first round over Andreas Michailidis. It had been a pretty even fight up until that point, but Bukauskas landed the big shot nd came away with the win. It looked like Michailidis had the upper hand if the fight went longer.

As such, Jimmy Crute is over a $3 favorite in this fight. Crute lost his perfect record when Misha Cirkunov forced him to tap out in September 2019. He scored a nice win over Michal Oleksiejczuk in his next fight. Crute is a pretty highly-touted prospect for the UFC right now. He’s already made four appearances since the start of December 2018 and is a light heavyweight that has a chance to move up the ranks. He’s getting a fighter here in Bukauskas that could very well have lost his debut if the fight had gone longer. It has to be Crute here as a money line parlay piece.

Is a title shot in the works for the winner of Katlyn Chookagian and Jessica Andrade? Chookagian beat the other Shevchenko, Antonina, with a really impressive 15-minute barrage last time out on May 30. It was a good follow-up to getting beaten up by Valentina in the title fight at UFC 247.

This will be a flyweight return for Andrade, who has been fighting as a strawweight since the middle of 2016. The 29-year-old must be an easier path in this division or simply prefers the weight at 115 pounds. I’m not sure how this will go for her. Changes in weight class are tough. It would be best to see how Andrade looks at the weigh-in and also to see if she even makes the week. The 31-year-old Chookagian returned to flyweight in January 2018 and has gone 5-2. Andrade is the better fighter, as the price indicates, but the weight change is the question here. Assuming she looks the part, she should win, but it’s a pricy assumption at -151.

This is a fight worthy of a pay-per-view card. Brian Ortega will return after 22 months to take on Chan Sung Jung in a fight that is expected to result in a featherweight title shot for the winner. Ortega has not fought since he got beaten up badly by Max Holloway at UFC 231. In that span, Ortega has changed fight camps and had a lot of time to stew about his first career loss.

Ortega will be in Abu Dhabi without coach Rener Gracie, who tested positive for COVID-19. We’ll see if that impacts Ortega, who was supposed to face the Korean Zombie last December, but a knee injury kept him from competing.

Instead, Chan Sung Jung fought Frankie Edgar and scored an easy first-round win. This is a big opportunity for the Korean Zombie, who has three first-round knockouts in his last four fights. It would have been an interesting decision for the judges in the other fight, but Yair Rodriguez knocked him out with one second left in the fight.

This is a hard fight to handicap. Ortega was a prospect with a ton of helium before the loss to Holloway. Should we take all of that away because of the defeat? On the other hand, Korean Zombie has been among the top fighters in this division his entire career, including a past title shot against prime Jose Aldo. To me, the value is on Ortega at the big number, but Korean Zombie probably wins the fight.