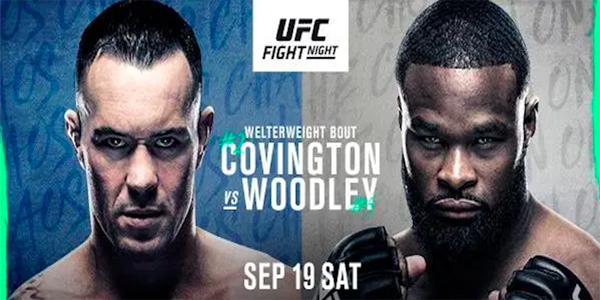 This is more like it. The UFC Vegas 11 card has a main event of Colby Covington and Tyron Woodley and is the perfect appetizer to the next pay-per-view event, which is headlined by Israel Adesanya vs. Paulo Costa. UFC on ESPN+ 36 has 14 matches and a lot of familiar names. This should be an outstanding card and it should be much stronger than some of the cards we’ve seen since the Stipe vs. DC fight.

We’ll sort through all 14 fights with odds from BetOnline Sportsbook for this weekend’s card at the UFC APEX and give some picks and predictions along the way.

Tyson Nam and Jerome Rivera get the action started on ESPN+ in the bantamweight division. Nam is a -175 favorite with +150 on the takeback for the underdog. The total is 2.5 and evenly juiced both ways. Rivera is the longer fighter and the more aggressive fighter, but Nam, who ended a two-fight losing streak with his first UFC win over Zarrukh Adashev is the clear favorite. This is Rivera’s first official UFC fight after a long stint in LFA. He’s a live dog at +150, even though Nam likely wins.

Featherweights Darrick Minner and TJ Laramie face off next at 145 pounds. Minner was a loser in his UFC debut to Grant Dawson back in February, but he also lost to Herbert Burns in a really tough matchup on the Dana White Contender Series last August. Laramie just fought on August 11 on the DWCS and earned himself a spot here with a first-round TKO win. Laramie is the -280 favorite off of that big showing and could be something of a prospect at 22 years old.

Andre Ewell is a -220 favorite against Irwin Rivera in another bantamweight battle. Rivera is +185 with a win and a loss to his name in UFC, both this year. He was a titleholder in Titan FC and just won for the first time over Ali AlQaisi by split decision back on August 8. Ewell is the far more experienced fighter and this feels like an attempt to get him another victory to make it two in a row since the loss to Marlon Vera. Ewell is hard to trust at this price, but he is in there with a big size and reach advantage.

Journey Newson is the -140 favorite over Randy Costa in the third and final bantamweight fight of the night. Costa is +120 to get over the .500 mark in UFC. Costa only has six pro fights to his name, but he bounced back from his first career loss with a win over Boston Salmon. Newson has his first UFC win overturned because of a failed drug test for marijuana. He’ll be extremely motivated to erase that black mark and score a win here. Costa has a massive size edge and five career KO/TKO wins. The play to me is under 1.5 at -110, as these two guys should come out swinging.

The first women’s fight of the night features Jessica-Rose Clark as a -220 favorite against Sarah Alpar. This is the official UFC debut for Alpar, who was victorious on the Dana White Contender Series last August. She was a LFA champion in the women’s bantamweight division, but she’ll be shaking off 13 months of rust here. Clark, who badly needs a win after consecutive losses, hasn’t fought since November. This is an iffy fight all the way around, but Alpar at +180 seems like a decent gamble when Clark is not a big striker and has a mediocre set of results.

We have a coin flip with juice between David Dvorak and Jordan Espinosa with both fighters at -110 in this flyweight fight. Espinosa is 2-2 in the UFC, but he’s fought some pretty strong competition. He did win as a bantamweight back in June over Mark De La Rosa, but he’ll return to flyweight here. Dvorak, who owns a strong 18-3 record with 15 stoppages, is 1-0 in UFC after beating Bruno Silva back in March. The toss-up line seems legit here, but Espinosa has the longer track record at the top levels.

The second of three women’s fights will be the matchup between Mayra Bueno Silva and Mara Romero Borella in the flyweight division. Silva is the big -245 favorite here. Borella has lost four of her last five fights and hasn’t looked good at all in the process. Even her win over Taila Santos was by the narrowest of margins with a split-decision victory. Silva is coming off of her first career loss to Maryna Moroz and she is on a much shorter layoff here. This is a spot where the big favorite makes sense. She’s a good money line parlay piece.

It looks like Miguel Baeza and Jeremiah Wells will also be on the card, but there was no line at time of writing.

USE YOUR BOL WELCOME BONUS TO BET UFC ON ESPN+ 36

This is a very quick turnaround for Kevin Holland, who fought back on August 8 and beat Joaquin Buckley. Holland didn’t take much damage in that fight and this will actually be his third event since mid-May. He’s won both of them by knockout. Holland’s opponent, Darren Stewart, is also fighting for the third time this year. He fought in the main event of CW 113 because Dana White was stopped by ESPN and Disney from having a March 20 card as COVID-19 took hold in the U.S.

Stewart lost that fight to Bartosz Fabinski, but rebounded in August with a quick win over Maki Pitolo. This is a step up in class for Stewart here, but this is also a step up for Holland, too. We also have contrasting styles here. Stewart, prior to his first career submission win on August 8, had fought to four straight decisions. I like the under 2.5 at +155 here. The smaller UFC APEX Octagon forces fighters to be closer together and more active. That is my favorite bet here, but Holland is the pick as the winner.

Randa Markos and Mackenzie Dern have a common opponent in Amanda Ribas. Both girls lost their respective fights to her. Other than that, Dern has beaten all eight opponents. Markos, however, is just 10-9-1 in her career as a whole. Dern only has four fights in the UFC, but her ceiling is clearly higher than that of Markos.

Markos has gone all 15 minutes in eight of her last nine fights. Dern isn’t the best of strikers, but her submission game has gotten her to this point and she already has two of those wins in the UFC. She’s also shown the ability to take some punishment. The younger, faster Dern should take care of business here. The longer this fight goes, the more chances she’ll have to assume top control and try and lock in one of those submissions. She’s likely to get one at some point.

Two huge light heavyweights square off here as Ryan Spann and Johnny Walker meet at 205 pounds. Spann is 6-foot-5 and Walker is 6-foot-6. It will be interesting to see how both guys handle the height. There aren’t a lot of guys with this kind of height, as they’ve both fought guys that are 6-foot-2 or 6-foot-3 recently. Spann even beat the 6-foot tall Devin Clark by submission.

We don’t really have a lot of data points against tall fighters for these two, which makes this fight something of a toss-up. Walker has lost two in a row, but he’s lost to good fighters in Nikita Krylov and Corey Anderson. Spann, meanwhile, is 5-0 in UFC if we include his Dana White Contender Series appearance. Spann has not fought the same guys that Walker has, but this feels like a toss-up and he’s the underdog at plus money, so he gets the nod.

Khamzat Chimaev will make his United States debut against Gerald Meerschaert. It took one fight for Chimaev to become must-see TV and he didn’t disappoint with a knockout win in his second fight 10 days later. Chimaev is really, truly stepping up in class here, but Meerschaert has also taken a schaert in four of his last six fights. Obviously he’s fought some high-class competition, but are we sure that Chimaev isn’t just going to be an animal in this division.

Dana White has already scheduled Chimaev a matchup with Demian Maia in November. Meerschaert took offense to that and voiced his disrespect, but it’s pretty clear that Chimaev is on the fast track. If Meerschaert wants to do something about it, the ball is in his court, but late wins over Trevin Giles and Deron Winn don’t do it for me. Chimaev wins again and probably convincingly, much like Ian Heinisch did against Meerschaert back in June.

Is it just me or is it sad at this point? Donald Cerrone is a fan favorite and he never backs down from a fight or a paycheck, but he has been completely uncompetitive in his last four fights. Tony Ferguson, Justin Gaethje, Conor McGregor, and Anthony Pettis have all had their way with Cowboy. Will Niko Price be the next one? Price is a flawed fighter compared to those four names and he has even lost three of his last five fights, including a lot of punishment in the loss to Vicente Luque back in May.

Price beat James Vick, who was in heavy decline long before that matchup last October. I don’t know if we can trust Price here. This may be a fight that Cerrone can win and prolong that career a little bit more. The 37-year-old has to want at least one more fight in front of a crowd and who knows when that will happen with COVID-19. This feels like an olive branch from Dana White to say, let’s give you a fight that you can win. This is a fight I think Cerrone can win. He probably won’t, but at +128, I think this is more of a 50/50 fight than the line suggests.

It wasn’t that long ago that Tyron Woodley was at the top of his game as a champion with multiple defenses. He lost the strap to Kamaru Usman and then followed it up by losing to Gilbert Burns. In fairness to Woodley, those are two outstanding fighters. Is Woodley getting disrespected too much here with this line against Covington? Given the quality of competition he has lost to recently, it’s hard to argue that this line is high.

Covington took Usman into the fifth round before losing. Prior to that, he beat what was left of Robbie Lawler and an over-the-hill Rafael dos Anjos. Covington’s recent results don’t justify this line. He could very well win this fight and look good in the process, especially with his experience in the championship rounds, but this is another fight in which the line is just too high. Covington probably wins, but Woodley is the value bet.