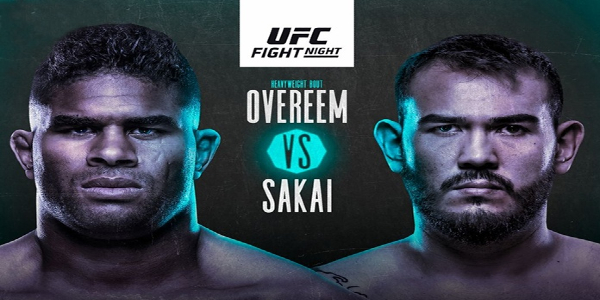 UFC Vegas 9 is set for Saturday night at the UFC APEX, but a lot of the fights that people were looking forward to have been moved to other events. As a reminder that COVID-19 is still alive and well, multiple fights have been affected by the dastardly virus. Ricky Simon and Nicco Montano were forced from the card. Maryna Moroz couldn’t secure a travel visa because of restrictions.

On the plus side, we do get the rescheduled fight between Ovince Saint Preux and Alonzo Menifield after OSP tested positive for the virus a few weeks ago. That is not the main event on the card, though. That spotlight belongs to Alistair Overeem and Augusto Sakai with a heavyweight main event on what is slated to be a card with nine fights.

As always, we’ll take a look at all of them. We’ll do that this week with odds from MyBookie Sportsbook to change it up a little.

Hunter Azure opens up the card as a -225 favorite in the bantamweight division against Cole Smith. Azure lost his biggest fight to date against Brian Kelleher by knockout. That brought the promising prospect down a peg and now he’ll be forced to work his way back up the division by proving himself in matches like this. Smith is 1-1 in his UFC career, but he hasn’t fought in nearly a year. He’s +185 and this fight is lined at 2.5 and over -245. Three of Azure’s last four fights have gone the distance. He should win and is a money line parlay piece.

Undefeated Alexander Romanov squares up with veteran Marcos Rogerio De Lima in the heavyweight division. Romanov is 11-0 in his MMA career, but this is his UFC debut coming over from Eagles FC. Romanov is a -135 favorite with +105 on the takeback for Rogerio, who scored an impressive KO win over Ben Sosoli back in February. The 35-year-old is 2-1 as a heavyweight, with his lone loss coming to the much taller Stefan Struve. Romanov is a smaller heavyweight at just six feet tall and I think that helps Rogerio de Lima. I like the +105 dog here.

Viviane Araujo slots in on short notice to fight Montana De La Rosa this flyweight fracas. Originally, Maryna Moroz was set for this fight, but she had problems securing a travel visa and Araujo answered the call. The notice isn’t really that short, as the decision was made August 12. Araujo is a -185 favorite here with ample prep time against De La Rosa, who to her credit, has won four of her last five fights. Araujo has not fought since a disappointing loss to Jessica Eye back in December. The line suggests a bounce back, but De La Rosa may be a feisty underdog in a fight expected to go the distane with -265 on over 2.5.

Long-limbed middleweight Andre Muniz finds himself a +135 underdog against Bartosz Fabinski in what is his second official UFC fight. The two-time Dana White Contender Series fighter beat Antonio Arroyo last November, but this is definitely a step up against Fabinski, who just beat Darren Stewart when the two participated in a one-off CWFC bout. Dana White wanted the fight for himself, but COVID-19 put the kibosh on that. Fabinski’s win over Stewart was his most impressive win to date, so you hope there’s no letdown at -165, but you never know. He should win here, as this is a step up in class for Muniz. This will be a very technical fight, as Muniz prefers to win by submission and Fabinski likes the ground and pound. Whichever fighter gets top control will win and that should be the more experienced Fabinski.

Jalin Turner is just 2-2 since he bloodied and battered Gleidson Cutis on the Dana White Contender Series. He drew a tough first opponent in Beneil Dariush and lost, but he’s beaten Callan Potter and Joshua Calibao, which took place back in February. Now Turner draws Thiago Moises, a fighter that also has a loss to Dariush to his name.

Moises scored a “name” win over Michael Johnson last time out, but Johnson’s best days are very much behind him. This line does feel a little bit inflated off of that last performance, but Turner has also been something of a disappointment in the UFC after how impressive he was on the way to the big stage. Turner does have a huge size edge here as he is the taller, longer fighter. With the smaller UFC APEX Octagon, that size advantage for Turner could be magnified even more, especially with some of the knockout power he has shown recently. I’m on the dog here.

Brian Kelleher had to fight under some very difficult circumstances last time out. He fought the emotionally-charged Cody Stamann, who had just lost his younger brother the week prior. Kelleher lost the fight by unanimous decision. By no means did he punt that fight, but the fight certainly had a different dynamic. Kelleher should be in a bounce back spot here now against UFC debutant Kevin Natividad.

Kelleher was originally set to face Ricky Simon and would have likely been a decent underdog in that fight, but one of Simon’s cornermen tested positive for COVID, so he was removed from the card. Natividad hasn’t fought since July 17. He was fighting in LFA, which is a solid promotion, but Kelleher has a lot more experience at the top level and he needs a win after that Stamann loss. This feels a lot like the Hunter Azure fight, except Kelleher is a clear favorite. He’s fighting a young guy that has shown promise, but isn’t really ready for a fight like this.

This is the biggest fight of Zelim Imadaev’s career. The 25-year-old left Russia with a perfect 8-0 record. Most of his wins came in FNG. He’s 0-2 in his UFC career with losses to Max Griffin and Danny Roberts. Those are two solid fighters. He certainly hasn’t gotten that cupcake fight that we’ve seen some UFC debutants and promising prospects get. This is not a must-win fight for his UFC future, but he needs this one. He needs that first win.

The 26-year-old Pereira had 31 fights under his belt before he got his UFC shot, so he has been a very busy fighter. At least until COVID. Pereira was DQ’d in his last fight back in mid-February and suffered his second straight UFC loss. Pereira was easily in line for the win over Diego Sanchez when he landed an illegal knee on his vulnerable opponent. The two have a common opponent in Roberts, who Pereira knocked out in his debut. He’s kind of a wild card in his fights. He badly missed weight against Tristan Connelly and then had the DQ last time out in a fight he was clearly winning. Until Imadaev proves something at the UFC level, it has to be Pereira, but this is a tough fight to call.

In full disclosure, this fight was supposed to take place two weeks ago at UFC Fight Night: Munhoz vs. Edgar, so let’s look back at what I said then:

Ovince Saint Preux has lost three of his last four fights. His only 2020 showing was a split decision loss in kind of a bland fight against Ben Rothwell. Neither fighter landed a ton of strikes, but Rothwell controlled the fight and won by enough on the stat sheet to get the win. OSP is fighting for the 39th time and it does feel like the 37-year-old is running out of tread on the tires to a degree.

Alonzo Menifield is looking to bounce back from a loss to Devin Clark. It was his first non-finish in his career and his gas tank was not up to par in that fight. He had won all but two of his fights in the first round by stoppage. That is really the key to this fight. If Menifield can finish it early, as he has so many other opponents, he’ll be in great shape. If not, OSP’s cardio could be enough to get the win in the third round or by decision.

Menifield has the higher upside, but a live bet on OSP late might not be a bad idea if the fight isn’t over before then.

Now, as this fight goes off with OSP freshly removed from having COVID-19, you have to wonder about how this goes for him. Many athletes that have had the virus have spoken about lingering issues. Initially, as you can see, I felt like OSP would have a chance in the later rounds with his cardio. Now I don’t think that’s the case. It’s entirely possible that he was fully asymptomatic or whatever else, but he hasn’t really been able to train the same. He can’t be the sharpest version of himself and he’s already on the backside of his career.

I liked Menifield then and I like him even more now.

Augusto Sakai only has one loss to his name. Alistair Overeem has 18, but the 40-year-old has also been a UFC fixture for a long, long time. Sakai has four UFC fights and a Dana White Contender Series appearance. We’ll see what he does here against one of the legends of the sport. To this point, Sakai has been impressive with five wins in his last five fights. He’s won twice by decision and three times by knockout.

You can knock Overeem out. It has happened 14 times in his career. This fight will be a great test for Sakai’s takedown defense. Overeem has 17 career submission wins. None of Sakai’s 17 pro fights have ended in a submission, but the amazing thing is that Overeem hasn’t had a submission win in almost 11 years. Sakai has never been knocked out. Unless Overeem is going to turn back the clock here, then I don’t know if standing and throwing with Sakai is the right call.

Overeem is the best of the old guys that Sakai has fought, but he’s had enough to get wins over Blagoy Ivanov and Andrei Arlovski by decision. I feel like he’s being disrespected a little bit here. Overeem nearly went the distance with Jairzinho Rozenstruik and knocked out Walt Harris, so he’s got a little extra bounce recently. This looks like a great fight, but a really challenging handicap. I’m not sure who to take here, but Sakai at the plus price seems like the better value.