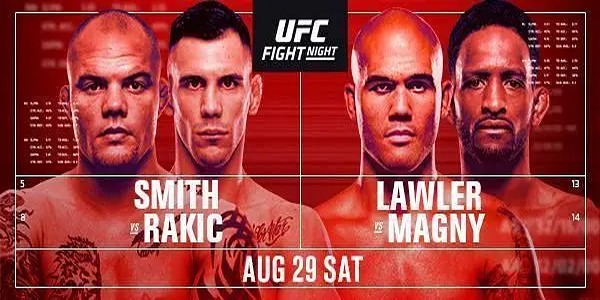 There are four different names for the UFC event on August 29. Whether you call it UFC Fight Night: Smith vs. Rakic, UFC Fight Night 175, UFC on ESPN+ 33, or UFC Vegas 8, the UFC APEX will once again be the site for this week’s 11 bouts in the Octagon.

Top to bottom, this looks like a pretty solid fight card, which you can enjoy on ESPN+. We’ll take a look with odds from BetOnline Sportsbook, which has numbers listed for 10 of the 11 fights as of Tuesday. We’re getting this preview out a bit earlier this week, so things are subject to change with weigh-ins, withdrawals, and, of course, the potential for COVID, like we saw last week with OSP vs. Menifield.

Sean Brady starts us off as a -380 favorite for his fight against Christian Aguilera in the welterweight division. Brady is looking to improve his record to 13-0 after two unanimous decision wins to open his UFC career. He isn’t a big striker, but he is a terrific wrestler with seven wins by decision and five by stoppage. Aguilera won over Anthony Ivy just 59 seconds into the start of his UFC career. Aguilera had a long stint in LFA and has 11 career knockouts, but the cardio will be a big question taking on a decision machine in Brady.

Polyana Viana and Emily Whitmire were supposed to fight at UFC 248, but Whitmire had medical issues with the weight cut and wound up being hospitalized the day of weigh-ins. Now the two will fight at flyweight, which is the division Whitmire was in when she joined UFC. Whitmire, who is only 4-3 in her career, is the -121 favorite here with +101 on the underdog Viana. Early line movement shifted the favorite here, as Viana lost in 69 seconds to Veronica Macedo in her first flyweight fight in over four years. Viana has lost three in a row and has mostly fought at strawweight, which could be why the market is against her.

Alex Cacares and Giga Chikadze were supposed to fight last week and will instead fight this week. Chikadze is the -235 favorite here, with +200 on Cacares. Cacares topped Chase Hooper at UFC 250 back in June. Chikadze was also victorious during the pandemic with a win over Jimmie Rivera in May. He also beat highly touted LFA fighter Jamall Emmers in March at UFC 248. Chikadze should win this one as well. Cacares is just 11-10 in his UFC career.

Alessio Di Chirico is -119 against Zak Cummings in another fight that has seen early line movement. Cummings was originally the favorite, but this line has now shifted and he is -101 in the bout. Di Chirico lost two in a row to end 2019 and hasn’t felt the feeling of winning in over two years. Cummings last fought at UFC 242 and lost to Omari Ahkmedov. While you have to respect the early movement, the ground game for Cummings is pretty solid and Di Chirico only has one knockout win since joining UFC seven fights ago. I disagree with the early move here.

In the second women’s fight, Mallory Martin is a big -300 favorite against Hannah Cifers. We saw a massive upset in the women’s division last weekend with Shana Dobson over huge favorite Mariya Agapova. Cifers lost to Agapova by first-round sub last time out for her third straight loss and third loss of 2020. She also lost to Mackenzie Dern and Angela Hill. Martin, though, seems to be a step down. I’d give Cifers better than a +250 shot to win this fight. When you consider that +250 implies less than a 29% chance that Cifers wins, it sure seems like she could win this fight more often than that. Cifers at +250 is a nice upset gamble.

The last fight of the prelim card should be a good one between Maki Pitolo and Impa Kasanganay. Kasanganay is a two-time Dana White Contender Series fighter and his most recent win over Anthony Adams on August 11 was enough to get him on this card. Kasanganay is definitely stepping up in class here against a real UFC fighter, but is still the -130 favorite with a perfect 7-0 record. Pitolo just fought and lost to Darren Stewart in 3:41 back on August 8. He’s +110 with both fighters on a quick turnaround. Kasanganay is pretty new to MMA, but this is his eighth fight in 20 months. You have to think the quick turnaround favors him since he is more accustomed to it. At -130, he’s a good bet.

This is a rematch between Ion Cutelaba and Magomed Ankalaev. Give Ankalaev credit for taking a rematch here despite knocking out Cutelaba in just 38 seconds in the first fight. But, the circumstances surrounding the stoppage made it only right. The referee stopped the fight far too early as both fighters were throwing shots, but Cutelaba appeared to be wildly swinging and not sure of his surroundings.

Ankalaev was named the winner, but both fighters, fighters from around the sport, and other UFC officials completely disagreed with the decision. So, they’ll settle it now after Cutelaba has recovered from COVID-19. The fight was originally set for UFC 252.

We have seen an adjustment here, as Ankalaev was more like -225 or so for the first fight. He was the more accurate striker early in the ill-fated first fight and that seems to have influenced the market. Ankalaev is 13-1 in his career and 4-1 in UFC. Cutelaba is only 4-4 in his UFC fights. This price is too high given what we just saw, even though Ankalev was going to win. But, also, given what we just saw, this fight probably ends quickly. The two came out throwing. This is probably my favorite bet on the card.

This is the fight without odds at time of writing. ROC champion Bill Algeo will slot in for Ryan Hall, who withdrew last weekend from this fight. Algeo did appear on Dana White’s Contender Series in June 2019 and lost to Brendan Loughnane. He went over a year without fighting before besting Tim Dooling in his CFFC debut, but he’s probably not on the level of Ricardo Lamas, even with the 38-year-old’s recent struggles.

He’s stepping down in class here and it may preserve his UFC career a little bit because he likely would have lost to Hall.

We haven’t seen Ji Yeon Kim in a while. She beat Nadia Kassem last October at UFC 243 with just her second career knockout win. That would seem to say more about Kassem, who has not fought since. Kim is 3-2 in her UFC career, but Alexa Grasso will probably be the best opponent she has faced to date. We could make a case for Antonina Shevchenko, but her recent hiccups make it close.

Grasso has had some issues of her own. She’s lost three of her last five fights, but some believe she beat Carla Esparza last September when the two went 15 minutes to a majority decision. The 27-year-old Grasso really needs this fight. She’s trending in the wrong direction with her UFC career and she gets a fighter in Kim that has only had one impressive UFC performance.

Robbie Lawler returns after more than 12 months away to attempt to break his three-fight losing streak. Lawler went 25 minutes with Colby Covington in an admirable performance back on August 3, 2019, but came up on the short end. He tapped out against Ben Askren at UFC 235 coming back after more than a year off.

You really have to wonder about the 38-year-old Lawler here. A legend of the sport, he’s on another long layoff and he isn’t getting any younger. He won’t have the championship rounds here and maybe three rounds will serve him better than five rounds, but he still faces long odds here against Magny.

Magny was set to face Geoff Neal, but Neal got sick at the start of August and had some touch-and-go moments. Lawler is in on short notice, which should help Magny even more. He probably doesn’t need the help against an over-the-hill fighter like Lawler, but this is a different type of fight for him. Neal would have been a scary fight for Magny. Lawler is less of one, as he isn’t the same striker anymore. Lawler has 20 career KO/TKO finishes, but hasn’t had one of those in over five years, a span of seven fights.

Remember when Anthony Smith went 25 minutes with Jon “Bones” Jones? He got soundly beaten up in that fight, but he didn’t get knocked out. Since then, he’s split fights against Alexander Gustafsson and Glover Teixeira. Now he’ll draw in as a big underdog against Aleksandar Rakic. Rakic lost by split decision to Volkan Oezdemir near the end of 2019.

Rakic was 1-for-9 on takedowns in that fight. He landed more significant strikes, but the appearance of failure ultimately gave Oezdemir the win. Smith, a veteran of 48 pro MMA fights, has 12 submission wins and four losses. He got Oezdemir to tap out back in October 2018.

Maybe Smith’s recent inconsistency is playing games with this line. Rakic ripped off 12 straight wins before the Oezdemir loss and some believe he actually won that fight, but this is a tough draw for him. As much as Smith may have fallen short of recent expectations, his fight IQ is extremely high. He’s only 32, so the gas tank shouldn’t be a concern if this fight goes long like his other ones have.

The chin is the question for Smith. Rakic has nine knockout wins and has a slight reach advantage. If Smith can stay away and get the fight to the ground, he can have some success. If he can’t, then it’s Rakic by KO. That may be the way to look here. Cut down on the juice with Rakic by KO. The longer the fight goes, look to live bet Smith.