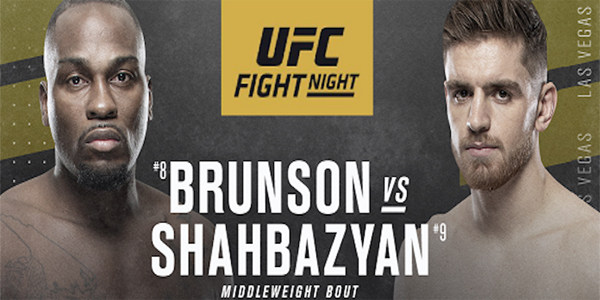 After four successful cards at Fight Island, the UFC returns home to Las Vegas and the APEX facility for UFC on ESPN+ 31. The main event will feature Derek Brunson and Edmen Shahbazyan to finish off a card with 11 fights.

Fighters from the United States did not fare well in Abu Dhabi for one reason or another, but the fact that they will be back on American soil could serve them well this weekend. This fight card is set to start at 6 p.m. ET on Saturday August 1 and you’ll need ESPN+ to see the main portion of the event.

We’ll take a look at odds from BetOnline Sportsbook and break down all 11 matches on the card, including some extra detail on the five main card bouts.

Action starts in the bantamweight division with -320 favorite Chris Gutierrez against UFC newcomer Cody Durden. Not to be confused with Tyler Durden of fictional Fight Club fame, Cody Durden is the last-minute replacement for Luke Sanders. He last fought on July 18 with a first-round knockout in NFC, so this is an extremely quick turnaround on short notice for the 11-2 fighter. Gutierrez is 3-1 in his official UFC fights after losing to Raoni Barcelos at the TUF 28 Finale. He should move to 4-1 here as Durden skips several levels of competition to get to UFC.

Timur Valiev is another UFC newcomer as he gets set to face Jamall Emmers. Valiev, however, is -170 for his fight. The former WSOF fighter actually has just two losses to his name and one of them was to Gutierrez. He’s won six in a row and is getting quite a bit of respect in the odds here, even though Emmers is the taller fighter. Emmers lost his UFC debut back at UFC 248 right before the shutdown. Valiev lost his debut fight over a decade ago and then had that split-decision loss to Gutierrez. Maybe the 30-year-old does indeed make a good first impression here.

Two names that are a lot more familiar to UFC fans are Eric Spicely and Markus Perez. They’ll meet at 185 pounds here. Spicely’s return to UFC did not go well with a loss to Deron Winn back on June 22 of last year. He had won twice in CES to get back, but it looked like the same old Spicely in his return. Perez is just 2-3 in UFC since joining the promotion. He is -200 to even up his record in a battle of fringy UFC guys. Spicely might need this fight to salvage another contract down the line.

Ray Borg is a -235 favorite against Nate Maness, even though the underdog has a six-inch height advantage and a big reach advantage as well. Maness is making his UFC debut with a major step up in class and the 29-year-old draws Borg’s strong ground game. Borg has lost three of his last five fights, but he’s lost to Demetrious Johnson, Casey Kenney, and Ricky Simon. Maness isn’t on that level. This looks like a match to get Borg back in the win column.

Let’s see if the career renaissance continues for Ed Herman. Herman lost three fights in a row and five of seven before winning his two most recent contests against Patrick Cummins and Khadis Ibragimov. He is +145 to make it three in a row when he takes on Gerald Meerschaert. This is a quick return for Meerschaert, who was knocked out by Ian Heinisch just under two months ago. This is actually his third fight of 2020 already, which is rather amazing given that there has been a global pandemic. Meerschaert has lost four of six, but finds himself at -170 here. That seems to say a lot about Herman, no?

The last fight on the prelim card brings us Frankie Saenz and Jonathan Martinez. Saenz is fighting for the first time in over 16 months. He was last seen getting knocked out by Marlon Vera. Martinez lost at UFC 247 to Andre Ewell to snap a modest two-fight winning streak. That was the third loss of his career. Martinez is a -253 favorite here over Saenz with a heavily-juiced total on the over. The 39-year-old Saenz probably doesn’t have too many fights left in him and a beatdown here could accelerate that retirement process.

GET A GREAT BONUS TO USE TOWARDS UFC ON ESPN+ 31

Initially, Trevin Giles was going to face Jun Yong Park, but travel restrictions because of COVID-19 have kept both Park and Da Ung Jun at home. Now Giles will draw Kevin Holland, who just got switched on to the card a little over a week ago. Holland is still the big favorite north of $2.

Giles got back in the win column against James Krause back at UFC 247 in February, but it was not an inspiring performance. Holland is back after knocking out Anthony Hernandez just 39 seconds into their fight on May 16. He got caught by Brendan Allen in a submission, but Holland has been very impressive in his UFC bouts otherwise. Giles doesn’t have a great ground game. Holland is the better striker. That is why we see the big favorite role here and the chalk should hold up.

Bobby Green has gone the distance in each of his last four fights. Twice he has won unanimously and twice he has lost unanimously. He’ll now take on Lando Vannata in a fight very much expected to go to the cards. Green survived a slam takedown from Clay Guida last time out to pick up the win, as he was the far more accurate and aggressive striker.

Vannata is coming off of a loss to Yancy Medeiros before the pandemic shut everything down. He’s 2-2-1 over his last five fights and has gone the distance in four of those. That’s why we have this big -275 price tag. Vannata wasn’t any more active than Medeiros, he was just more accurate. That fight was kept virtually upright for both guys. Green is a more versatile fighter and should be just as active as Vannata. This looks like a good spot to roll the dice on an upset.

Randy Brown and Vicente Luque could very well give us the best fight of the night. Each of Brown’s last three fights has ended in a finish and he has been the victor in the last two. He got Warlley Alves to tap out and knocked out Bryan Barberena. It has been a good way to bounce back from losses to Niko Price and Belal Muhammad. Brown is 12-3 in his career with 12 of his 15 fights ending in some kind of stoppage.

Vicente Luque is giving up some size here. Brown has four inches on the favorite, but that hasn’t altered the odds too much, as Luque is still a comfortable favorite. Luque is a hard worker and that aggressiveness is expected to be a factor in this fight. His win over Niko Price last time out at UFC 249 was a vicious barrage and a big step in the right direction for the 28-year-old. Luque now has 10 knockouts and has only tapped twice. Brown hasn’t fought in a while, but Luque was able to stay sharp with that May fight. This one will have fireworks and has strong Fight of the Night potential, with Luque coming out on top.

The only women’s fight on the card is the lead-in to the main event, as Jennifer Maia takes on Joanne Calderwood. Calderwood draws the favorite role here with wins in three of her last four fights, but this is her first fight in 2020. She last won by split decision over Angela Lee at UFC 242. It will be about focus here for Calderwood, who may have a bigger shot down the line against Valentina Shevchenko. Shevchenko is not ready to come back yet, so Calderwood wants to stay sharp against Maia.

This could be a “be careful what you wish for” scenario for Calderwood, as she has a lot to lose here. Maia is a dangerous opponent, as evidenced by wins over Roxanne Modafferi and Alexis Davis last year. She also lost to Katlyn Chookagian, a fighter that Calderwood also lost to at UFC 238. Calderwood should win here and she’s supposed to win here, but this is definitely a dangerous fight for her to take. She’ll have to be focused.

This looks to be a bad matchup for 36-year-old Derek Brunson. He has a much more extensive resume than Edmen Shahbazyan and more fight IQ, so that could serve him well in this one. He’s coming off of a very efficient effort against Ian Heinisch at UFC 241, but that was way back in August of last year. He’s fought the best that this division has to offer and has held his own.

Shahbazyan has not, but the potential is oozing from the 22-year-old. Since making a statement on the Dana White Contender Series two years ago, Shahbazyan has won four times in UFC matchups, including the last three by first-round stoppage. Brunson has been knocked out five times, though the last two have been legends in Israel Adesanya and Jacare Souza. Shahbazyan has a long way to go to be discussed among those guys, but there is a reason why he draws a name opponent in Brunson here and this is a chance to put him over in hopes of a bigger fight in the fall.