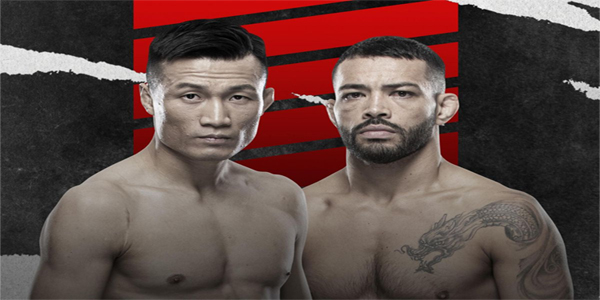 UFC 263 was a really special event, as Israel Adesanya defended his title and Brandon Moreno became the first UFC champion from Mexico. Let’s see what the follow-up event brings us on June 19 from the UFC Apex in Las Vegas.

The main event is between The Korean Zombie and Dan Ige and will begin at 4 p.m. ET on ESPN2. Chan Sung Jung and Ige will make for a great main event with a very competitive line and as the culmination of 12 fights on the Saturday card.

This past weekend’s card was light on women’s fights and we only have two on the board for Saturday. The women’s flyweight fight between Casey O’Neill and Lara Procopio gets this fight card started. Procopio is the short favorite here with a 1-1 record in the UFC. O’Neill won her debut fight on February 20 over Shana Dobson after a championship run in EMMA and a win in ADW. Procopio’s win came after more than 18 months on the sidelines back on February 6. We’ll see how she fares here, but this first fight looks like a toss-up, which inherently puts value on the underdog price.

The long-awaited return of Rick Glenn is this weekend in an underdog role against Joaquim Silva. Glenn has not fought since November 30, 2018. He lost to Kevin Aguilar by decision in that fight. It was his second loss in three fights and his seventh straight fight to go the distance.

We also haven’t seen Silva in a while. He lost to Nasrat Haqparast on August 3, 2019 and has not been seen since. This is a really hard fight to figure out with two long delays. Glenn has never been knocked out and has the size edge here, so a decision makes sense, but -245 is a big price to pay.

Roque Martinez hails from Guam. Josh Parisian is not a Frenchman. He is an American, so there is not always truth in advertising. Anyway, Parisian is favored to send Martinez to his third straight loss. Martinez did win his Rizin FF match to start 2020, but lost consecutive UFC fights to end the pandemic year.

Parisian, meanwhile, won on the Dana White Contender Series in August, but then lost to Parker Porter by unanimous decision right after Thanksgiving. Porter was clearly the winner, including one card that read 30-26. It was a disappointing outcome for Parisian with a big size advantage. He has the same here against Martinez. Let’s see if he squanders it again. He shouldn’t with a longer fight camp.

It took all of 16 seconds for Matthew Semelsberger to win his last fight in March, so he is plenty fresh for this fight as an underdog against a fellow knockout artists in Khaos Williams. Semelsberger is now 2-0 in UFC after bouncing around a bunch of different promotions. Williams lost his last fight to the more experienced Michel Pereira by unanimous decision. This one will not go the distance, though it could go over 1.5 based on that -150 number.

I’d have to look Williams at -155. He’s never been finished and should be in better shape if this fight does run long.

Kanako Murata was the Invicta champion in the women’s strawweight division before making her UFC debut on November 14 with a win over Randa Markos. That fight came 370 days after her title victory in her second Invicta fight. The 27-year-old has moved up the ranks quickly and brings a 12-1 record into this fight.

It will be a tough one against 16-2 fighter with 13 submission wins in Virna Jandiroba. We haven’t seen Murata’s takedown defense on display at the upper levels yet. Mackenzie Dern and Carla Esparza were able to get decision wins against Jandiroba, who is only 2-2 in UFC, but it feels like she has a great opportunity to score a nice win here. Jandiroba should hold serve at -135 as the more experienced fighter with a clear advantage on the canvas.

The final fight of the prelim card will be in the light heavyweight division between Nicolae Negumereanu and Aleksa Camur. This is only the second UFC fight for Negumereanu, who lost to Saparbeg Safarov back on 3/16/19. He was off throughout the pandemic and now takes on Camur, who is coming off of his first pro loss. He lost at UFC 253 to William Knight is what wound up being a pretty boring fight on the ground.

The 25-year-old Camur should win this fight, as the line implies, but he’s going to need to be more aggressive and also keep this fight upright longer. There are better fights to bet on the board than this one, but the over 2.5 at -150 could be a sneaky sharp play, as Camur’s two UFC fights under contract have gone the distance.

Is this the end of the line for 40-year-old Matt Brown? He lost to Carlos Condit back in January and lost to Miguel Baeza prior to that. Brown has done a lot for the sport, but clearly his best days are behind him. This is a big fight for Dhiego Lima that only has downside and minimal upside. In other words, he can’t lose this fight.

Lima lost to Belal Muhammad in his return after a year and a half away. It was a tough first assignment, but he also didn’t look good in split-decision wins over Luke Jumeau and Court McGee back in 2019. The 32-year-old may not be around long himself if he can’t secure a win here. The over 2.5 at -130 is the play, as Lima has gone the distance in three straight and four of five and Brown doesn’t have much striking ability left.

This card seems to be full of fighters with something to prove. Wellington Turman is on the fourth fight of his first UFC contract and comes in at 1-2 with a decision win over Markus Perez and losses to Karl Roberson and Andrew Sanchez. He’ll look for the mild upset here of Bruno Silva. Turman and Sanchez were exchanging first-round bombs in that August 8 fight, bout Sanchez landed more and threw more for the win.

This will be the UFC debut for Silva, who is 19-6 in his career. He’s tapped out five times, but has never been knocked out and has 16 of those to his name. The 31-year-old has not fought since his M-1 title victory on November 2, 2018, so who knows what to expect from him in this fight. That’s an extended layoff to say the least. I don’t even know how to bet this fight.

Turman has seven submission wins to his name. He must have the better ground game here.

Julian Erosa is on a nice run here. He’s won three straight, the last two in the UFC, after getting booted from the promotion following three straight losses. He went back to CageSport for a confidence booster and then got the call to face Sean Woodson during the pandemic. He won that fight and then scored a very impressive win over Nate Landwehr in February.

He draws a tough assignment here in Seungwoo Choi. Choi is 2-2 in UFC. He was one of the many victims of Movsar Evloev and then he lost to Gavin Tucker at UFC 240, but has won two straight, both by decision since. His win over Youssef Zalal was impressive back in February. Choi is a more patient fighter than Erosa, which makes this a tough handicap. It looks to me like the winner of the first round will hold serve throughout, so this may be a good live betting fight.

Davey Grant has won three in a row after losing three of four to open up his UFC career. The 35-year-old Englishman takes on Marlon Vera here and is a big underdog to pull the upset. Grant has wins over Martin Day and Jonathan Martinez recently, but those have been good matchups for him. Grant has worked a lot on his striking and has two of his three career knockouts in the last 12 months.

Marlon Vera enters this fight just 3-7-1 in decisions, but he has 14 career stoppage wins to his name. Based on what we’ve seen from Grant, this one may not make it to a stoppage. Vera really needs to push forward in this fight. Who knows what would have happened had Sean O’Malley not gotten hurt at UFC 252, but Vera could be on a three-fight losing streak. His best play here is to attack. Let’s see if he’s willing to do it.

Aleksei Oleinik turns 44 on Sunday. It would be a nice birthday present to get a win over Sergey Spivak, but Oleinik has dropped his last two fights by early knockouts. The longtime veteran will be in the cage for the 76th time in his pro career. Who knows how many more fights he has, but now that his ground game isn’t as effective, he’s become something of a punching bag.

Oleinik has 46 submission wins to his name, but only eight knockouts. He hasn’t had one since 2014. He’s had one submission win in his last six fights. It sure feels like the end is near, but Sergey Spivak hasn’t been all that impressive in the UFC yet. He’s 3-2 with a majority decision as the swing fight. The 26-year-old should have the better gas tank if this fight goes long and he has some ground chops of his own.

I’ll be looking over in this fight. Spivak has not been an early finisher in his UFC fights and the plus-money price looks good.

The championship rounds will be activated if need be for the main event between The Korean Zombie and Dan Ige. Chan Sung Jung will be in action for the first time since losing to Brian Ortega back in October over 25 minutes. It was his second fight to go into the fifth round in his last four. He lost with one second left to Yair Rodriguez 2.5 years ago.

Dan Ige went five rounds with Calvin Kattar back in July and lost that fight. It is the only loss he’s had since January 20, 2018, so it snapped a six-fight losing streak. Apparently he was upset because he knocked out Gavin Tucker in just 22 seconds last time out.

GET A 50% DEPOSIT BONUS UP TO $1000 FROM BETONLINE SPORTSBOOK