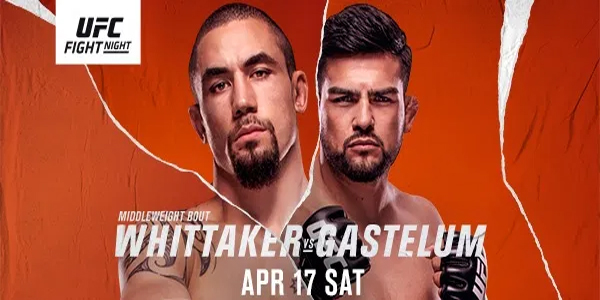 Will UFC Vegas 24 be the last event at the UFC Apex for a long time? With a full crowd expected for the blowout UFC 261 card in Jacksonville and some states and areas willing to hold high-capacity shows, Dana White needs to start getting those gate receipts for all the money he spent paying fighters and on other things during the pandemic.

That means that this week’s UFC on ESPN: Whittaker vs. Gastelum may be the last time that the smaller training facility Octagon is in the spotlight. UFC 261 is set for Jacksonville and UFC 262 on May 15 is set for the Toyota Center in Houston. Fight Night locations are not yet set otherwise.

Anyway, we’ll set our sights on this one, but the future for UFC looks pretty good in terms of welcoming back fans.

Odds come from BetOnline Sportsbook as we survey the 12 fights scheduled for this card. The card, like so many others, is subject to change with positive COVID tests and injuries still a possibility.

We start with a lopsided line for the fight between Anthony Birchak and Tony Gravely. Gravely is 1-1 under contract in the UFC with his split-decision win back in November and a loss to Brett Johns on January 25. That was about 4.5 months after he impressed Dana White enough on the Contender Series for a contract by beating Ray Rodriguez.

Birchak, who is back in the UFC for the second time, lost to Gustavo Lopez back in November to start his second stint on a bad note. He’s now 16-7, but 2-3 in UFC. Judging by the line here, he’s expected to drop another one, as Gravely is a huge favorite.

A much more competitive fight is expected in the women’s bantamweight division between Zarah Fairn and Josiane Nunes. Fairn is 0-2 in UFC, but losses to Megan Anderson and Felicia Spencer were tough first assignments. Nunes, who just headlined the Forze MMA 1 event on November 28, is 7-1 in her pro MMA career. She’s making a big leap here to the big stage after fighting in a lot of smaller promotions.

She has six wins by knockout, including each of her last five. She lost to Taila Santos way back in 2013 for her only career loss. The thing about this fight is that Fairn is a big bantamweight at 5-foot-8. Nunes is only 5-foot-2. Nunes has the punching power, but can she get inside to use it or even get takedowns? This is a big fight for Fairn, whose UFC career could be hanging in the balance in these next two fights. The 37-year-old may just be overmatched at this level, but Nunes is not Anderson or Spencer. I’d give her the benefit of the doubt at the plus price.

Speaking of careers nearing the end, Gerald Meerschaert is so far down this UFC on ESPN card that it speaks volumes about his stock with the promotion. Having lost three of his last four fights, Meerschaert, who lost in 17 seconds to Khamzat Chimaev last time out, finds himself an underdog to Bartosz Fabinski. The 34-year-old Fabinski doesn’t have a lot of impressive data points himself.

He beat Darren Stewart when the two were forced to fight at CW 113 as the pandemic set in. Otherwise, he’s lost his last two UFC fights. I don’t really want to put my money on either one of these guys.

Lupita Godinez makes her UFC debut here against Jessica Penne. Godinez is 5-0, but was a champion in both BTC and also LFA with her main event majority decision win over Vanessa Demopoulos. Demopoulos lost to Cory McKenna in her Contender Series appearance in August and then lost to Godinez 2.5 months later.

Penne has dropped four of her last five and the 38-year-old will be fighting for the first time in just under four years in this fight. Even though she should have a pretty well-defined experience edge over Godinez, this is a really big ask for Penne. The line certainly suggests exactly that. Not a lot of great betting spots on the undercard thus far.

Juan Espino and Alexander Romanov meet in what looks like a competitive and exciting fight with a close line and 1.5 lined -115 both ways on the total. Espino, the TUF 28 Finale champion, went 22 months before fighting in the UFC and he beat Jeff Hughes in that return fight. He gets a much tougher opponent here in Romanov, who is undefeated in his 13 fights and all 13 have ended with a finish.

He beat Marcos Rogerio de Lima back in November and Roque Martinez in September, both by submission. Espino is 40 years old now. Romanov is 30 and has so many paths to victory as a heavyweight. Espino is mostly a submission guy with eight wins via tap. These are two quality fighters, but Romanov has more ways to win. He should also be the younger, quicker fighter. This is probably my favorite pick of the prelims so far.

Another women’s fight on the prelims as Justine Kish looks for some sort of positive momentum in her career. Kish has dropped three of four. She beat Lucie Pudilova in January, but then lost to Sabina Mazo in September by submission. The 24-year-old Mazo does look like a pretty solid prospect all things considered.

So does the 27-year-old Cortez, who is 8-1 in her career. She also holds wins over Erin Blanchfield, who was supposed to debut last week, but Norma Dumont Viana was 3.5 pounds overweight. Cortez also has a win over Mariya Agapova. She’s been impressive and the line suggests exactly that. She’s a good parlay piece to add with another fighter on the card.

The main card gets underway with a competitively-lined fight between Ricardo Ramos and Bill Algeo. Ramos is 2-2 in his last four fights, including a couple of KO losses to Lerone Murphy and Said Nurmagomedov. Bill Algeo has also split his last four fights, but is 1-1 in UFC and 1-2 if we include his Contender Series bout. Algeo beat Spike Carlyle by unanimous decision last time out to bounce back nicely from his loss to Ricardo Lamas two months prior.

It was a very convincing win for Algeo, who outstruck his opponent 118 to 28 and landed more than three times the significant strikes. The question here is the method of victory. Algeo goes to decisions. Three of the last four fights for Ramos have ended via stoppage. The total is juiced over, suggesting Algeo by decision. I have to think his height advantage helps in the smaller Octagon here. This isn’t a strong pick, but Algeo it is.

Alexander Munoz’s full-fledged UFC debut didn’t go as well as he had hoped. Munoz lost by unanimous decision back in August to Nasrat Haqparast. That was more than two years after his Contender Series victory over Nick Newell. That loss was the first for Munoz, who trains with Team Alpha Male and faces a big size disadvantage in this fight against Luis Pena.

Pena stands 6-foot-3 against the 5-foot-9 Munoz and that could be a big reason for the odds discrepancy here. Pena, though, has lost two of his last three fights, with defeats against Khama Worthy and Matt Frevola. Pena came to the UFC with so much promise and potential, but he’s just 5-3 in his UFC action and hasn’t been able to replicate all of the finishes that he had early in his career. Another fight where neither guy is worth your money, but Pena will be the pick.

To say that this is a huge matchup for Abdul Razak Alhassan is an understatement. Alhassan was at the top of his career in 2018 with a 10-1 record after a huge knockout win over Niko Price. That September, Alhassan was indicted on serious rape and sexual assault charges. He was found not guilty and returned to the UFC in July 2020 with a loss to Mounir Lazzez. He missed weight for that fight and then missed weight again for his loss to Khaos Williams in November.

He should beat Jacob Malkoun here. Malkoun is 4-1 in his career and it took 18 seconds for Phil Hawes to knock him out on Fight Island at UFC 254. This is the 25-year-old’s first fight since. Here is yet another fight, though, where betting options are limited. Alhassan should win, but he also should have looked better in his last two fights, especially the Williams fight. He’ll probably miss weight again here, too. I guess we’ll look under 1.5 here.

Chase Sherman’s return to UFC worked out well. The 31-year-old was released in 2018 and went to Island Fights, where he went 3-0 and then returned to take on Ike Villanueva on May 13 when the UFC returned after the pandemic. He won that fight by knockout early in the second round. It was about retribution for Sherman, who was just 2-5 in UFC before getting released.

There aren’t many fights left for Andrei Arlovski, who will step in for his 51st professional match in this one. Arlovski is coming off of a submission loss to Tom Aspinall that stopped a two-fight winning streak. It is interesting to see the respect for Arlovski and the lack thereof for Sherman in this fight. The best approach here is likely Sherman by KO or Arlovski by decision. Arlovski hasn’t won a fight by stoppage since the middle of 2015. If he’s going to win, it’s by decision.

Let’s see if the top fights on the bill can save what looks like a very weak card. Drakkar Klose and Jeremy Stephens is a closely-lined fight in the lightweight division. It would be fair to say that Klose has lost to the two best UFC fighters he has faced in David Teymur and Beneil Dariush. The Dariush loss came March 7, right before the pandemic took hold. It was the first stoppage loss of Klose’s career.

Jeremy Stephens has not won a fight since February 24, 2018. He’s lost four in a row and likely would have lost to Yair Rodriguez had it not been for an accidental eye poke. He did lose to Rodriguez 27 days later. Then he lost to Calvin Kattar and also missed weight last May. Once again, another fight where you don’t really want to bet on either guy. Stephens is burning money for bettors, though, so it has to be Klose.

This is a quick turnaround for Kelvin Gastelum compared to how his other recent fights have gone. Gastelum just beat Ian Heinisch at UFC 258 with a 15-minute decision victory for his first win in nearly three years. Gastelum improved to 17-6 with the win, but it was yet another fight without a finish for the 29-year-old. He’ll be giving up some size here in this one against Robert Whittaker, who is a big -250 favorite in the main event of what looks to be an underwhelming fight card.

Whittaker’s only loss since 2014 came against Israel Adesanya in the title fight back at UFC 243. This price should be bigger on Whittaker. Gastelum hasn’t done anything recently that really stands out. Whittaker wasn’t ahead in the fight against Adesanya when he got KO’d, but it was a lot closer than most fights against Adesanya seem to be.

This was originally supposed to be Paulo Costa against Gastelum, but Whittaker has had about a month to prepare for the fight and that should be more than enough. Whittaker is a good parlay piece with Cortez on the prelim card.