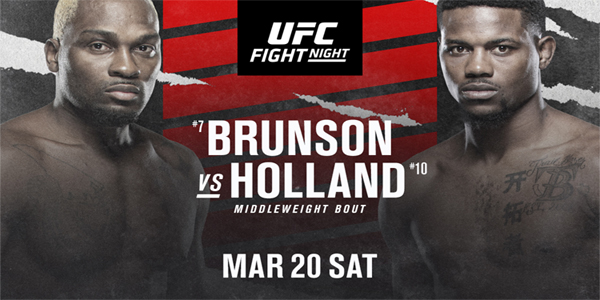 Fans are coming soon to the UFC, but for now, we’ll still be handicapping fight cards at the UFC Apex in Las Vegas. After a dud of a card last week with two No Contest endings on the main card and no bonus awarded for Fight of the Night, Dana White and the UFC matchmakers will hope for a better showing this week.

The main event of UFC Vegas 22 / UFC on ESPN 21 features Derek Brunson up against Kevin Holland. This should be a good main event to cap off a card with 12 fights scheduled and the possibility for a 13th. Anthony Birchak’s scheduled opponent, Johnny Eduardo, had to withdraw because of visa issues. If UFC finds a replacement, we’ll have 13 fights.

Odds are posted over at BetOnline Sportsbook, where you can get a 5% Bitcoin Boost on deposits using that cryptocurrency through March 21. Let’s take a look and find some picks on the card.

JP Buys will fight under contract for the first time as he takes on Bruno Silva in the flyweight opener for this UFC Vegas 22 card. Buys is the favorite here after an impressive debut on the Dana White Contender Series in November, 367 days after his only LFA fight. The veteran Silva lost both of his 2020 fights by unanimous decision. This is potentially the end of the UFC road for Silva, who is technically 0-3 in the UFC. He lost to Khalid Taha, but Taha popped a positive test for a banned substance. Buys should win here.

Former Invicta Phoenix Series champ Julija Stoliarenko will hope for a better outcome than her UFC debut. She lost to Yana Kunitskaya, but Kunitskaya’s upset win over Ketlen Vieira last month bumped her stock a bit. The 32-year-old Julia Avila is coming off of just the second loss of his career. Losing to Sijara Eubanks isn’t a very good look these days, but Avila got very little going and struggled badly with her wrestling. She should bounce back here, but no way would I lay this exorbitant price. Eight of Stoliarenko’s nine wins have come via submission and Eubanks had 10 takedowns in the last fight.

The UFC has taken a lot of fighters lately from Combate Americas. Jesse Strader is another one. He’ll make his UFC debut here fighting for the first time since 8/2/19 as a massive underdog against Montel Jackson. Jackson hasn’t been terribly impressive in his UFC fights, but the price says it all here. However, there isn’t much betting value on this one, other than maybe the over 2.5 at +160. Jackson has gone the distance in four of his five fights under contract.

Trevin Giles was originally set to face Dricus du Plessis, but Roman Dolidze will step in on short notice because of visa issues. Dolidze slots in as a -136 favorite. He is 8-0 in his career with seven stoppage wins and then a split-decision dub over John Allan back in December. That was his second UFC fight and it was a lot more like a unanimous decision win. He outclassed Allan in the fight with more top control, more takedowns, and a lot more strikes, both overall and significant. The judging was poor for that fight. The split-decision and the late replacement seem to give Dolidze some pretty solid value here with a cheap favorite price.

Leonardo Santos only has one loss since 2009. That came against Santiago Ponzinibbio in the TUF 2 Brazil semifinals. Santos shook off a long hiatus to knock out Stevie Ray and then beat Roman Bogatov over a year later at UFC 251. Santos won the fight convincingly, but Bogatov was docked a point for an illegal knee. Santos now draws in against Grant Dawson, who is 16-1 in his career with four wins under UFC contract. Dawson has 11 submission wins to his name. Santos has nine and has never tapped out. This looks like a quality fight on the undercard. Santos at +180 seems a little bit high, but this one probably goes the distance with two guys that haven’t been stopped, so over 2.5 at -175 is what makes the most sense to me.

This could very well be the end of the road for Marion Reneau. The 43-year-old has lost three fights in a row and this fight was pushed back after she tested positive for COVID-19. A loss here would mean that Reneau has gone since 2/24/18 without a win. A UFC release would likely come soon after and she is a big underdog to Macy Chiasson. The TUF 28 champion is 3-1 since beating Pannie Kianzad for that title. This is an important fight for Chiasson in that she can’t lose it. She has a five-inch height advantage, more reach, and is the younger, faster, stronger fighter. A loss here would be a devastating setback. It shouldn’t happen.

Diminutive women’s strawweight Montserrat Ruiz makes her UFC debut against 25-year-old Cheyanne Buys. Buys was originally slated to fight Kay Hansen in what would have been a tremendously interesting fight between hot prospects in the division, but Hansen withdrew from the fight the week before the event. Ruiz is 9-1, but stands only five feet tall. She is 1-1 in Invicta. The only loss for Buys came in Invicta back in 2018. She hasn’t really fought anybody of note and won’t here, but winds up a clear favorite when she would have been a dog to Hansen.

We haven’t seen Song Kenan in a while. He last fought before the pandemic really took hold with a win over Callan Potter back on 2/22/20. It was Song’s fourth win in five fights in the UFC and his third via knockout. The 31-year-old is 14-2 in fights that end in a stoppage and just 2-3 in fights that don’t. With the total juiced more than $2 on over 2.5, that would seem to be a bad omen for his chances.

On the other hand, 35-year-old Max Griffin is only 2-3 in his last five UFC fights. He caught UFC debutant Ramiz Brahimaj in a terrible spot back in November and scored a knockout win in a fight that he was leading by the scorecards, but it still hadn’t been that impressive of a performance. To be honest, I can’t justify the high price on Griffin. Both of his recent wins have come against UFC debutants. Song has a lot more experience than that.

Former Combate Americas champion Gustavo Lopez will fight in the UFC for the third time in this matchup against Adrian Yanez. As you can see, Yanez is a big favorite over Lopez, who is 1-1 in the UFC. Lopez is only 6-4 over his last 10 fights. The 27-year-old Yanez is yet another recent Dana White Contender Series graduate to get a contract. He beat up Brady Huang with a 39-second KO and then handled Victor Rodriguez with ease a couple months later.

One of Yanez’s losses came against Miles Johns, who is now a UFC regular. He also lost to Domingo Pilarte, who is on a UFC contract as well. Yanez is the taller, rangier fighter here, so both of those things work in his favor and he’s also simply had the better body of work.

Don’Tale Mayes badly needed a win back in November over Roque Martinez and he got it. Of course, he was also a -230 favorite, so it was expected. Mayes is on the fourth fight of his contract after a good showing against Ricardo Prasel back in 2018 on the Contender Series. Mayes probably isn’t at risk of getting cut, as heavyweights always seem to be in short supply, but he would be best-served to look as good as possible here against Tui Tuivasa.

Speaking of fighters that badly needed a win, Tuivasa got that against Stefan Struve back in October. That win snapped a three-fight losing streak for the 28-year-old Australian. Tuivasa has a new training team and a new focus, but he’s still been something of a disappointment in recent fights. I can’t lay over $2 with him here, but I definitely don’t like Mayes either. Maybe the total is the way to attack this.

Another weak UFC card is drawing to a close here with Brad Riddell against Gregor Gillespie. We don’t have a lot of overwhelming favorites, but there are a lot of favorites from -175 up to -250 and we have another one here in Gillespie. Gillespie is something of a scary favorite, given that he has not fought since 11/2/19 when he suffered the first setback of his career against Kevin Lee. The 33-year-old was riding quite a high, but that stopped pretty abruptly.

Riddell is 3-0 in UFC, but this is a very big step up in class against the former Division I wrestler and kickboxer. Riddell went 2-0 last year, with wins over Magomend Mustafaev and Alex Da Silva. The Da Silva win was impressive, but two of Da Silva’s three losses have now come since he joined UFC. Though Riddell has gone to decision in four straight fights, Gillespie pushes the issue. Gillespie by stoppage to cut down the juice makes sense if you have that option.

At least the main event should salvage this card. Derek Brunson draws in against Kevin Holland at 185 pounds. The 37-year-old Brunson has won three in a row and none of his seven losses are worth scoffing at. He’s lost to Jacare Souza twice, Israel Adesanya, Anderson Silva, Robert Whittaker, and then Kendall Grove, a guy that had spent five years in the UFC before the two met at ShoFight 20.

Holland’s most recent win was against Jacare. He hasn’t fought the level of competition that Brunson has throughout his career, but he’s ripped off eight of his last nine and most of them have come in impressive fashion. This fight has a lot to do with your perception of Holland. Does he deserve to be mentioned in the same breath as the guys that Brunson has previously lost against? If your answer is no, then even with the age and size differences, you have to give Brunson a fighting chance. That’s what I’m doing.